How to Put Out Every Kind of Kitchen Fire 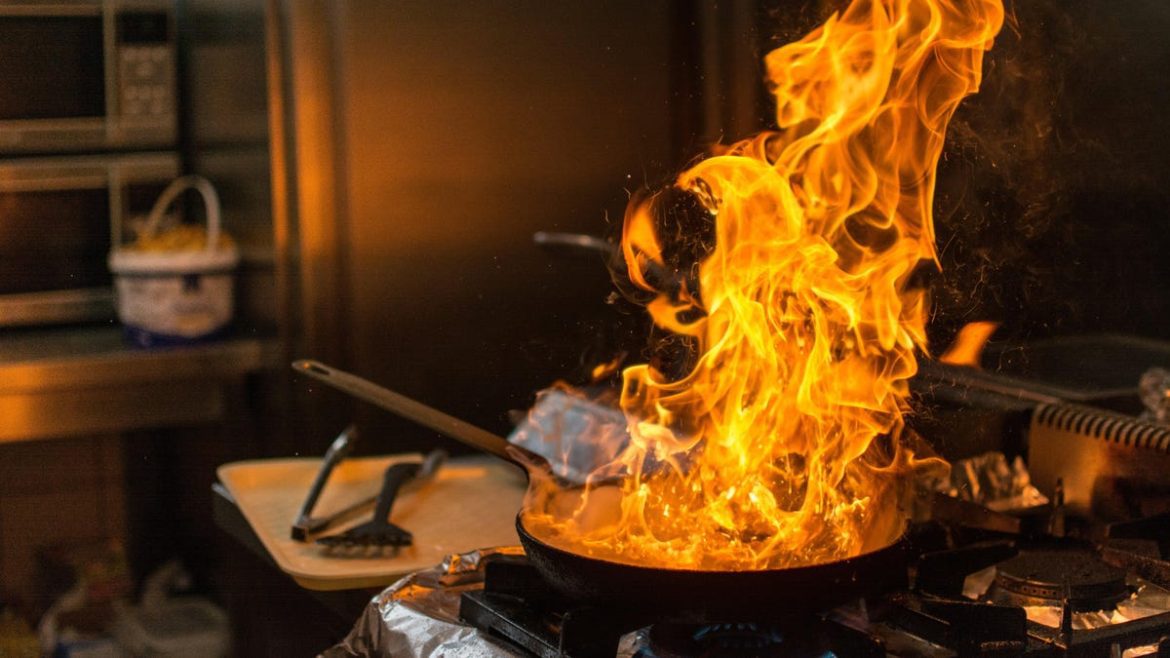 Cooking accidents are the leading cause of house fires in the United States, so as we move into the season of food-centric holidays and staying in at night where it’s cozy, let’s acquaint ourselves with the most effective ways of putting out various types of kitchen fires. Because not all of them are created equal, and depending on how and where the fire starts, different methods can help you put it out more quickly than others.

Here’s what to do if a fire starts in your kitchen.

How to stop a fire in the microwave or oven

I once memorably started a fire in the break room of an old job by tossing a paper plate in the microwave without realizing it had foil lettering on it (left over from someone’s birthday party? Unclear!) and also without knowing a trace amount of foil could start a fire anyway. I was but a teenager, and I didn’t exactly respond well to the situation; as I recall, I opened the microwave door and screamed at the fire, which surprisingly did not put it out.

It turns out I broke the cardinal rule of a microwave or oven fires: Don’t open that door. Fires need oxygen to burn and grow larger, so as tempting as it might be to whip open the door to and start extinguishing, take a beat. According to the National Institutes of Health, you first need to turn off the microwave or oven to stop the internal fan from feeding the flames oxygen. Then, wait for the fire to suffocate within the enclosed space. Once you’re sure it’s totally out, you can open the door and start cleaning up (but first, open your windows to air out your kitchen). If the fire doesn’t show signs of burning out on its own, call 911 and leave the house.

How to put out a grease fire

A grease fire is any fire that happens when oil, grease, or fat gets so hot it ignites, so you can imagine how many opportunities there are for them to occur when you’re cooking up a storm for Thanksgiving. When faced with this potentially dangerous situation, Verywell Health advises, you need to first turn off the stove, then if possible, cover the site of the blaze—whether it’s a pot, a pan, or a fryer—with a lid to cut off the oxygen supply.

Never pour water on a grease fire, which will send flaming oil splashing around the kitchen. Instead, after putting a lid on it, douse the fire with baking soda, salt, or your fire extinguisher to dampen the flames. If you can’t not get things under control quickly, call 911 and get out.

Don’t try to move the pot or pan, even to the sink. A rush of adrenaline might convince you this is a good idea, but it only increases your risk of spreading the flames further. Focusing on smothering the fire at the source.

How to put out a kitchen electrical fire

Unlike a grease or oven fire, an electrical fire can happen anywhere in the home, but since so many cooking gadgets are electrical, it’s important to know how to respond. According to Edison International, you should never attempt to combat an electrical fire with water, since that could lead to an accidental electrocution. Instead, unplug the device if it is safe to do so and use a fire extinguisher or baking soda to combat the flames. And call 911 right away to report the electrical emergency, even if you got the fire out.

Russia Reactivates Its Trolls and Bots Ahead of Tuesday’s Midterms

Winding Down With LaKeith Stanfield

73 Questions With Jennifer Lopez | Vogue
24 mins ago
Concern grows about Paul Whelan, an American imprisoned in Russia.
30 mins ago
4 Reasons the Rivian R1S Is Better Than a Tesla...
1 hour ago