Redactle Is Like Wordle but for a Whole Wikipedia Page 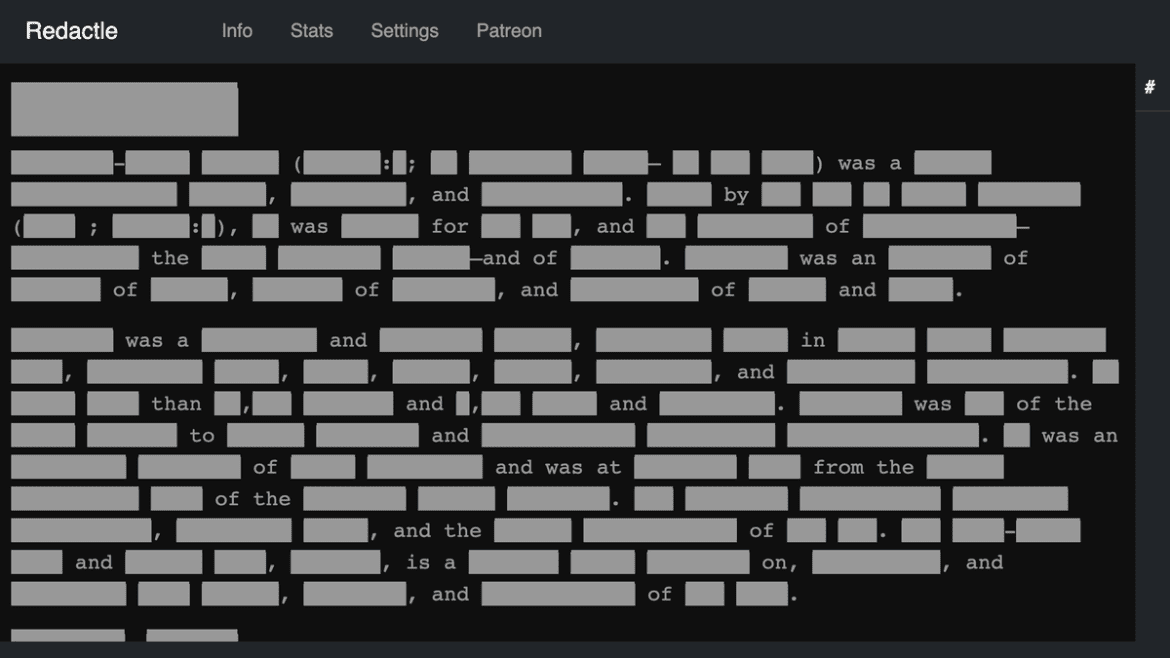 Wordle is tiny; Redactle is big. Where Wordle asks you to solve a single five-letter word, Redactle presents you with an entire blacked-out wikipedia page, and not a stub, either. You guess a word at a time, and you have unlimited guesses. You even get a bunch of freebies to start with, words like “was” and “and” and “for.” So what’s so hard about it?

Well, the whole idea is that you need to figure out the specific person or thing or place the article is about. In Wordle, knowing a few common letters is often enough to get you most of the way there; if I get some hits on letters like E and T and R, there’s not much work left to do. But in Redactle, does it really help you to know that “he” appears 159 times? Maybe. Sort of.

I’ll walk you through a game I played yesterday (no spoilers for today). The page was long, which makes sense given that it’s taken from Wikipedia’s 10,000 vital articles—so it’s not likely to be a stub or anything too unknown or obscure.

The structure of a Wikipedia article was apparent, with headings in large type, although most words in the headings were blacked out. There was a bulleted list with lots of “The _____ of _____” and “Concerning the ______,” which suggested this might be about a person who had written a lot of books. And since the page is laid out in a monospace font, you can make some guesses about the lengths of words, even when you don’t know what the words might be.

But is it about a person? The title is only one word, no room for a first and last name. The first few words had a hyphen between them, which made me think of those French hyphenated names.

I started with “born,” and got three hits. So possibly a person. I tried “France” on a whim, and got 19 hits. “Book” pulled up 20, but “author” only three, and none in that first sentence that identifies what a person is best known for. I found myself looking for a sweet spot between specific, unusual words (which would reveal more detail) and common words that tend to turn up in biographies (which would be more likely to be hits). There were a few hits for “king,” so my mind went to American/British/French revolutionary times. Not many for “England” or “America” though. I guessed “woman,” expecting that a famous female would be described with a lot of “first woman to do such-and-such.” One hit. So I took a stab at “he” and got 159, including several in the intro. OK, it’s a dude. No hits for “playwright,” “Spain,” “medicine,” “1700,” or “1800.” Finally I decided to lean into the France angle and guessed “French” (34 hits), “revolution” (2 hits), and “enlightenment” (8 hits). Enlightenment was in the very first sentence.

Come on, come on, there are only so many Enlightenment dudes famous enough to be in the top Wikipedia articles. Let’s try someone famous; maybe a miss will bring up a mention of a collaborator or inspiration. Voltaire? Yep. The whole article was revealed. I got it in 46 guesses, with a guess accuracy of 89.13%.

How hard is Redactle?

I found it difficult, and frustrating, and yet my score yesterday was close to the median (43, according to the day’s stats). Like Wordle, everybody gets the same puzzle every day, and some days will be harder than others. On a Reddit thread about the game, some people mention taking 250 guesses to solve a hard entry.

When do we get a new Redactle?

New puzzles come out every day at 11 a.m. CDT, which happens to be noon Eastern Time.

What’s the best strategy for Redactle?

Well, I’m figuring it out as I go. In the future, I’ll probably try more specific words; “enlightenment” and “revolution” would have been good follow-ups after “France” rather than hail-marys to play late in the game.

I’m also going to start paying more attention to the headings on Wikipedia articles, and the ways people and things are described in their opening paragraphs. It turns out Voltaire was described as a “writer” rather than an “author,” for example.

A Reddit thread on strategy suggests that good clue words may include:

There are also some more tips in that thread on spotting the format of certain phrases, like birth and death dates of a person, the semicolons that Wikipedia uses when giving the translation of a foreign phrase. So give it a try, be observant, and enjoy!