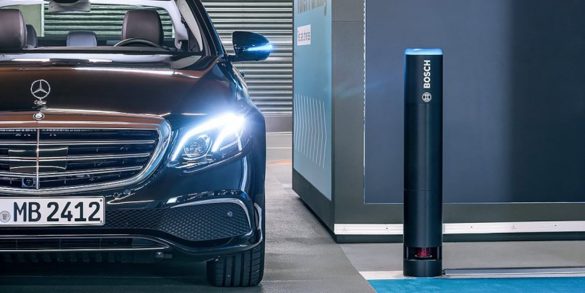 While Tesla seems to be running away with its Fully Self-Driving beta program rollout, Mercedes-Benz (with Bosch as a partner) has come up with an alternative answer. The two companies have received regulatory approval for an automated valet system from the German Federal Motor Transport Authority in December 2022.

The system was first demonstrated all the way back in 2017 and the two have been running tests at Mercedes’ home airport in Stuttgart since 2020.

How Does the Mercedes-Bosch Automatic Valet System Work?

The system, currently known as Bosch Automated Valet parking, only requires the driver to leave the car at a designated drop-off point at the entrance of a parking lot or car park and then use the Mercedes Me app to send the car to a pre-booked parking space.

When a pickup is requested, the car drives itself from the parking spot to another pick-up point where you can drive off without having to deal with looking around for your car in a packed parking space.

Speaking of which, since the system doesn’t require a human to drive around looking for a parking space, the cars can be parked closer together. Mercedes and Bosch claim that this can make car parks up to 20% more efficient.

The valet achieves this by combining the car’s self-driving capabilities with Bosch-made sensors installed in the parking lot. The sensors supplement the information received by the car’s own sensors, helping it make better, more controlled decisions that lower the chance of any accidents.

This is rather important to Mercedes as the system is currently rated at level four of the SAE scale for self-driving capability. At this level, human intervention isn’t required for the vehicle to operate, the operation is limited to a predetermined geo-fenced location and most importantly, the company bears liability for any accidents or damages, not you as the driver.

Additionally, the sensors can also be retrofitted at existing car parks, including multi-story ones often found at airports or other commercial locations.

What Are the Supported Cars and Parking Lots?

At the moment, the system is only available for Mercedes’ S-Class and EQS models built after July 2022 with an activated Intelligent Park Pilot feature available via the Mercedes Me app. Currently, you can find it in the P6 parking lot managed by airport parking management company Apcoa at the Stuttgart airport.

That said, Mercedes has tested the system in the U.S., with a demonstration held at a Los Angeles parking garage in March this year.

What Does It Mean for Non-Tesla Self-Driving Systems?

While Tesla still remains arguably ahead when it comes to fully automated self-driving systems, its systems being more reliable and accurate, demonstrations and implementations like this are proof that the competition is hot on its heels. Mercedes itself has been ramping up its self-driving technology called Drive Pilot for commercial use.

Drive Pilot is currently limited for use in Germany and is being prepared for a U.S. launch. Similar to GM’s Super Cruise or Ford’s Blue Cruise systems, Drive Pilot also only works on mapped highways with speeds of up to 37mph.

Also, while the German counterpart of the system might be limited to this system by law, the U.S. has no such restrictions. However, Mercedes doesn’t seem comfortable going any higher when just starting off with the system.

The Future of Self-Driving Cars

With companies like Mercedes-Benz, GM, Ford, Volkswagen and BMW among others quickly joining Tesla in the race to build a fully-functional, road-legal driving system, we as customers are now getting more choices that keep getting better by the day.

As more and more car manufacturers break new ground with their EVs, we get more competition, which eventually leads to better cars for you to drive.