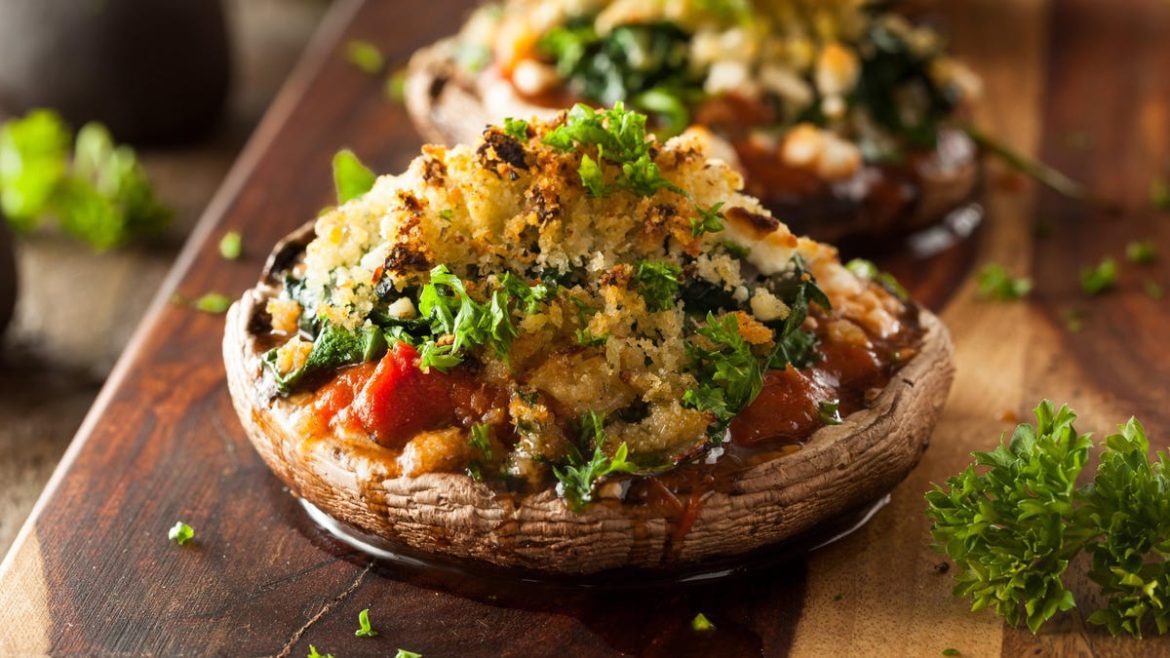 Stuffed mushrooms are a classic holiday appetizer, but the bigger your shroom, the more moisture you have to contend with while cooking it. Stuffing a raw mushroom with filling blocks the water’s escape route, and you risk turning your mushroom into a mushy-room (ha ha ha). Here are three ways to keep wetness from ruining your fungal offerings.

Score your mushrooms before roasting to help the water escape

According to the 2022 issue of Cook’s Illustrated “All-Time Best Thanksgiving Recipes,” mushrooms have a built-in moisture barrier:

The exterior coating of any mushroom is covered with a layer of hydrophobic (water-repellent) proteins that prevents water from coming in—and keeps moisture from going out.

To combat this, they suggest scoring the tops (the non-gill side) of your portobello caps in a crisscross pattern, which allows water to drip out and evaporate while roasting. You can also do this with large, non-portobello shrooms, especially if you plan to keep them whole, sear them, or stuff them.

Cook your mushrooms a little before stuffing them

Giving the mushrooms a head start gives the water a chance to get out before it’s being blocked by a fatty filling. It’s not a crucial step when you’re working with smaller shrooms, but the big ‘uns really benefit. Place your scored, de-gilled mushrooms on a wire rack and roast, score side up, in a 375℉ oven for 10-15 minutes, until they give off a good bit of liquid. Remove from the oven, flip over, and fill. (Be sure to pre-cook any ingredients that are also likely to give off water while roasting, especially raw vegetables and meats.)

Skip the oil if pan-frying or searing

Oil is a water blocker, and coating your mushrooms in oil before sautéing or searing them prevents water from leaving, resulting in those telltale mushy-rooms. Luckily, you don’t need to coat mushrooms with any fat at all before cooking—they’ll even brown much better without it. We’ve discussed this before, but just to re-cap (cap!):

Direct, dry contact with the pan lets that moisture boil off quickly, browning the mushrooms and creating a concentrated, flavorful fond on the bottom of the pan. Once the mushrooms are browned and softened to your liking, you can deglaze all those little browned bits with some wine, then add your fat of choice to bring some richness to the dish.

This works particularly well with big, meaty guys (like portobellos). Set the heat to just under medium, then clean, dry, slice, and salt your mushrooms (salting also helps draw out moisture, by way of osmosis). Arrange them in a single, even layer on the pan and let them cook, undisturbed, until they are browned on the bottom. Flip and repeat. Deglaze the pan with a little wine, add a pat of butter, and let it reduce into a delicious pan sauce.

What Is Pig Butchering and How Does It Work?

When High Fashion and QAnon Collide
3 mins ago
Russia postpones a meeting on a nuclear arms control treaty,...
31 mins ago
The Best Questions to Ask a Hiring Manager During an...
1 hour ago