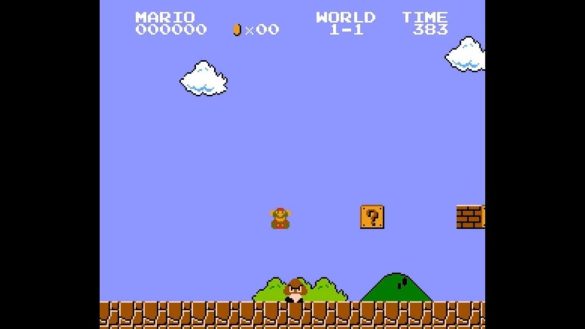 The original Super Mario Bros. is a game with stakes. You don’t have the luxury of save states or level passwords. Once you lose all your lives, it’s game over. If you want to play again, you need to start from scratch—on World 1-1, whether you lost your third life on the first level, or on World 8-4. Or so we thought.

Millions have played Super Mario Bros. under those rules, and millions have suffered humiliation and defeat. Progressing through 32 levels of Bowser-infested Mushroom Kingdom only to lose to the beast himself in the game’s final moments is punishment enough. To be subjected to a return to “World 1-1,” followed by that cheery theme song? Torture.

But it turns out there was never any reason to replay the entire game every time you lost. From 1985 until now, you have been able to restart the World you died on, no matter how many game overs you get. No Game Genie required.

(I’ll give you a moment to collect yourself.)

While this Super Mario Bros. secret has bounced around the internet for years, RetroGamingOnline made it go viral on TikTok with a recent video. With 2.1 million views and 108,000 likes and counting, it has woken up another group of gamers to this buried secret of the NES era.

This trick works with any version of the original Super Mario Bros., whether on the OG NES, Virtual Console on the Wii U, or Nintendo Switch Online, so you can try it out for yourself. The next time you lose all your lives, allow the game to return to the title screen. Hold down the A button, then press Start. The game will then restart at the first level of the last world you died in, rather than kicking things off from 1-1.

That means if you died in World 4-1, you’ll see 4-1. If you lost in World 7-3, you start at 7-1. So you’ll still need to play through any levels of the world you already beat, but it sure beats starting over completely.

Kayleigh McEnany announces birth of second child
17 mins ago
How to Get Your Personal Festival Lineup From Spotify With...
35 mins ago
He Returned a Dazed Soldier to the Russians. Ukraine Calls...
1 hour ago