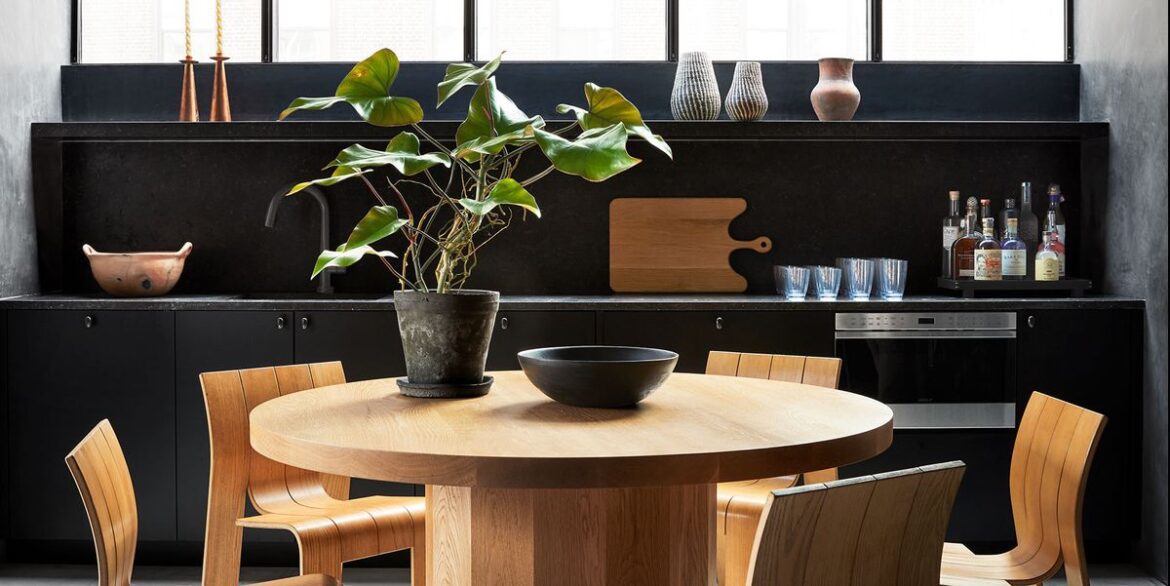 Park Avenue from East 57th to 96th streets is as much a literary and cultural allusion as it is an address. With a meticulously landscaped median, the Manhattan boulevard is a two-mile gauntlet of elegant brick apartment buildings in shades from buff to earthen, with liveried doormen and Renaissance Revival and neo-Gothic exterior ornament. Designed largely between the Gilded Age and the Great Depression by such architects as Emery Roth and Rosario Candela, this stretch of rarefied real estate is mostly void of the quaint rowhouses and twee storefronts found on nearby Madison or Lexington. The writer Gay Talese immortalized it in the 1970s as “the Park Avenue of poodles and polished brass; it is cab country, tip-town, glassville, a window washer’s paradise.”

As such, strolling the neutral-hued brick canyon of Park Avenue on an early summer afternoon, it is the architectural outlier that beguiles: On a corner in the 90s stands a stark white four-story structure, stucco-over-brick—a cheery cube that cuts through the staid neighborhood like a splash of Aperol. With nearly 40 steel-framed windows in its stocky facade, it seems equal parts fortress and aerie.

The spiral stair at the heart of a Manhattan townhouse transformed by Ashe Leandro.
Stephen Kent Johnson

At almost 7,000 square feet, it has seen many incarnations and owners since it was erected in the 1880s, while Grover Cleveland was president. It was built as a Victorian-era apartment house, then renovated in 1908 to incorporate three street-level storefronts. By
the early 2000s it had been reborn, a bit haphazardly, as a single-family house. But it is the recent reimagining—down to the studs—by Ashe Leandro, the partnership of the Venezuelan-born architect Reinaldo Leandro and the American designer Ariel Ashe, which shows how a modest building can hold its own along the storied boulevard, simultaneously alluding to the past while -celebrating modernity. “We weren’t looking to imitate anything,” Leandro says. “We had so few constraints, and that was really freeing.”

The rooftop terrace overlooks Park Avenue. The outdoor sofa is from CB2, the chair from Black Wolf Design, the cocktail table from Shoppe Amber Interiors, and the side table from Fermob.
Stephen Kent Johnson

The owners, Adam Miller, a media executive, and his wife, Jennifer, who works in public relations, looked for designers who would be willing to start without preconceptions. With two teenage children, the couple had previously lived downtown in lofts and were eager to bring their minimal sensibility uptown. Several firms either wanted to recreate other sober townhouses they had remodeled nearby or “had absolutely no idea what to do,” Adam says, “basically interviewing us and asking if we had any good ideas.” Only Leandro and Ashe, who are in their early 40s and are known for working with edgy young clients, seemed on their wavelength. “If we had an inspiration, it was John Pawson,” says Leandro, referring to the famed British ultraminimalist. “We wanted to evoke that purity.”

In the living room, organic shapes pair with an original mantel. The custom sofa is in a Rose Uniacke wool; 1930s Danish armchairs are from 1stDibs. The lounge chair is from Moving Mountains, and the sconces are by Ignazio Gardella. The painting (center) is by Aythamy Armas, and the drawing (right) by Pedro Reyes.
Stephen Kent Johnson

The pair suggested a complete reorientation of the house. They removed the original doors (there are now windows there, symmetrical with the existing ones), creating an elevated entry off the avenue reached by a set of wide poured concrete stairs. The change made the property wide instead of deep, rendering it more like an expansive mansion on a quiet side street than a narrow townhouse on Park Avenue. Inside the entry there is now a huge sweeping circular stair that forms the core of the residence, with oak treads and a simple black matte iron railing. The palette is a mixture of dark gray and ebony with warm wood and white walls. “It’s all about texture when you are so pared down,” says Ashe.

“We weren’t looking to imitate anything. And that was really freeing.”

The designers also came up with an innovative solution for the exposed ground-floor corner, which was previously highly visible through its tall windows. There had long been a kitchen in that spot with the shades continually drawn. Leandro and Ashe moved it to a new location and employed an idea they remembered from the Chelsea townhouse of the art dealer Matthew Marks: They removed the old floor of the space to create a double-height basement family room that cannot be glimpsed from the street. Now, during the day, sun floods into the space through windows near the ceiling line, and at night, the room, with a plum-colored sectional, is illuminated by a dangling 20-foot-tall Isamu Noguchi lantern hung from the apex.

In the garden room on the roof terrace, chairs by Gijs Bakker surround a custom table. The pendant is from YLighting.
Stephen Kent Johnson

The living spaces on the floors above hold a tightly edited selection of furnishings. In the dining room, a travertine table is surrounded by custom-made wooden chairs by Rob Pluhowski. The living room’s curvy green sofa sits across from an original stone mantel that was moved here from elsewhere in the house.

The subtlety of Leandro and Ashe’s approach is perhaps best seen on the top floor, where a glassed-in garden room is flanked by terraces. In this newly redone space, light streams in through curved conservatory windows, and Adam makes his morning coffee at a black-countered wet bar. As night falls, the couple’s children and their friends take over this lofty oasis, with Park Avenue laid out, lights twinkling, below them.

Produced by William Li and styled by Howard Christian

Kids’ Interest in Nature Wanes in the Teen Years