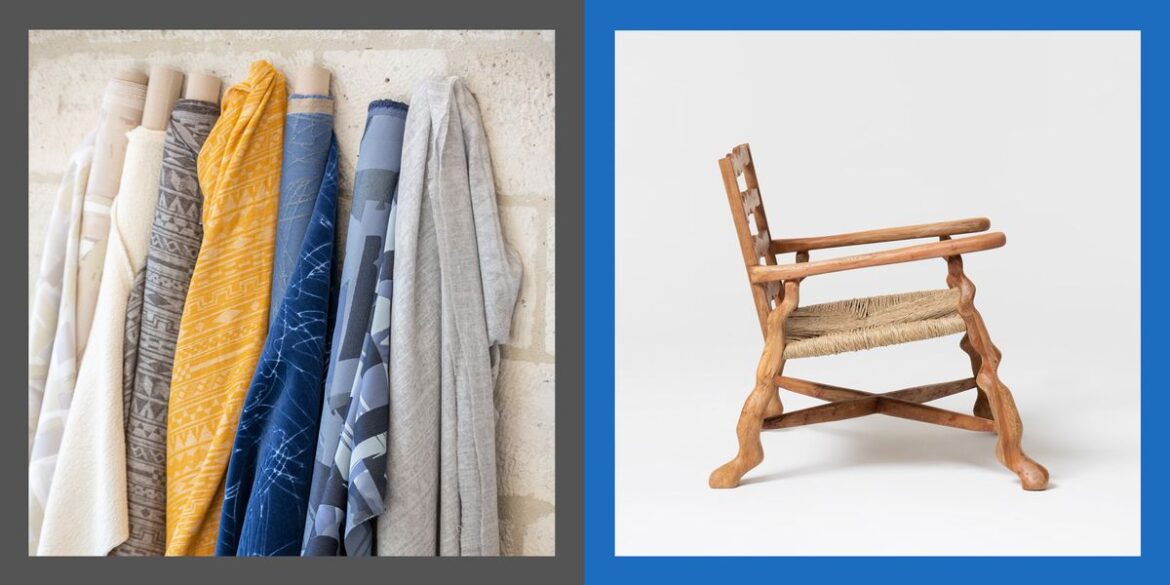 This past week saw the design industry’s best and brightest crowd the streets of Milan for Salone del Mobile, the international furniture fair. And while we’ve covered everything from the city’s best new bar to the week’s chicest basket installation, we wanted to call out a few of our favorite launches from emerging and established talents alike. From a film director’s first public foray into interiors to an entire restaurant conceived by two rising stars of Georgian design, these are the debuts we won’t forget.

With the number of stills that proliferated online after I Am Love was released (and again almost a decade later following Call Me by Your Name), Italian director Luca Guadagnino became a household name for more than just cinephiles. This year, his interiors firm, Studio Luca Guadagnino, presented an immersive installation at Spazio RT showcasing FontanaArte sconces (both new and old), intricate ceramics by Francesco Simeti, and a delightfully modern pastel mantel produced in Nymphenburg, all under a woven velvet ceiling inspired by Carlo Scarpa. Cinematic indeed! —Camille Okhio
American designer Sam Stewart introduced two pieces for the Italian brand Vero’s “Drop 2” this week, a vase and a cocktail table. This marks the first time the designer has effectively dipped his toe into production at scale, utilizing Vero’s manufacturing facilities in Puglia for each made-to-order piece. Both products have rubber “shoes” that accentuate form as much as function—the table notably won’t slip or slide on most surfaces if you, like Stewart himself, like to put your feet up. —Sean Santiago

Nata Janberidze and Keti Toloraia of the Tbilisi, Georgia–based Rooms unveiled their first hospitality project in Europe, the Georgian restaurant Gheama (meaning “good for you”) in Milan’s Porta Romana neighborhood. New work includes an eight-foot-tall tapestry and wall of library shelving that anchor the space, and the recurring use of Georgian motifs throughout complements chef Iosi Kakiashvili’s updated take on traditional dishes. —S.S.
Trame founders Ismail and Adnane Tazi presented their Alhambra.gcode collection at Alcova this year, a series of 3D-printed ceramics designed by Amandine David, Wonmin Park, and Arthur Mamou-Mani. The brief was to design around the 16th-century Spanish Renaissance palace of Alhambra, the structure of which was heavily influenced by the dominant Islamic culture of the time. —C.O.

The New York–based Egyptian queen of food and fun Laila Gohar has partnered with Muller Van Severen on a table of many levels. Inspired by the mud brick pigeon houses of her homeland, the Pigeon Table features several layers for landing and taking off, in white and sleek pastels. The long-distance collaboration developed before Gohar met the Van Severens, fueled by their mutual appreciation for each other’s creative practices. Now that they’ve connected, who knows what else they might cook up? –C.O.

Casa Cabana for the Invisible Collection

Martina Mondadori, founder of Cabana, launched the brand’s first lighting range this week, inspired by the late 20th-century Italian architect Renzo Mongiardino. (He also designed Mondadori’s childhood home in Milan, pictured here.) Made to order in Italy and available exclusively through the Invisible Collection and Cabana’s website, the collection includes three distinct designs, two of which are based on iconic styles from the local restaurant Da Giacomo, designed by Mongiardino in 1989. —S.S.

Ladies & Gentlemen Studio debuted their new lighting collection, Veil, as part of the group exhibition “Cipango: Japan Reimagined,” organized by the furniture brand Ariake. A contemporary study of lightness and ephemerality, the series is comprised of two styles of lights featuring simple panels of cotton, satin, and linen draped over a wooden frame and accented with finials. Despite the creative point of departure, both pieces have great presence. —S.S.

The London-based designers Wilkinson & Rivera (whose work is available in the U.S. via the Future Perfect) expanded their collection of stools and seating with the introduction of the Silla de Baile alongside their first cocktail table, the Mesa de Baile. Exhibited in the cloisters of a church for SCP, the styles further the young duo’s refinement of their handmade technique, evolved to minimize waste and offcuts—though it still consumes a fair amount of time, with individual pieces taking up to a month to complete. —S.S.

Fantasy-obsessed British designer Luke Edward Hall’s travels and dreams often make their way into his work. Case in point: Hall’s new collaboration with Ginori 1735, the Italian porcelain purveyors founded by the Marquis Carlo Andrea Ginori in the 18th century. Wonderfully naive drawings of the Cotswolds, Marrakech, Rajasthan, Big Sur, and Venice decorate candles with scents that remind Hall of his visits, with porcelain dishes to match. —C.O.
Historic French homeware houses Rinck (founded in 1841) and Thevenon (founded in 1908) have teamed up for a vibrant collection of textiles, exhibiting at the experimental Alcova show in Milan this week. Both brands are family run and currently under the leadership of the sharp, young minds of Valentin Goux and Victor Thevenon. At Alcova, the brands showed a collection of colorful textiles and rugs, some of which displayed abstracted details from historic furniture. —C.O.

Doctors May Identify Which Kids’ COVID-19 Cases are Severe