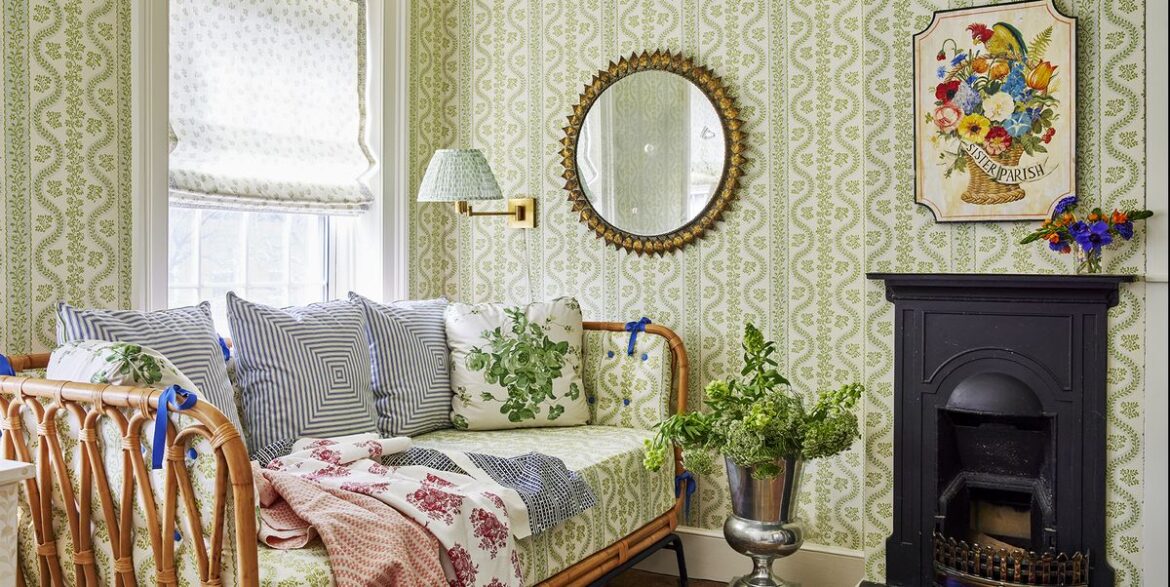 Eliza Harris, great-granddaughter of the legendary 20th-century decorator Sister Parish, lounges in a blossom pink tufted armchair, three floors up in a 112-year-old townhouse apartment in Manhattan’s Chelsea neighborhood. Just outside, the steel-skied afternoon had finally given way to a flash torrential cloudburst. “You’re drenched!” she says, rushing to her cohort with a towel in one hand and a glass of wine in the other.

And for a moment, any onlooker might feel as if they’ve invaded someone’s private home. Enveloped in patterned cabbage-green wallpaper, old-world spongeware vases, and antique artwork, the new Sister Parish Design showroom and official New York office is brimming with hospitable delight. But, of course, that’s the Sister Parish way.

This corner of the showroom features a pillowcase with Parish Design’s Treillage fabric, against Dolly wallpaper.
Maura McEvoy

Harris is the latest torch holder in a long line of design protégés. And if you’re part of the family, you’re expected to have a design point of view at an early age. “It’s in my bones, it’s in my blood, I’ve been surrounded with it all my life,” says Harris, chief creative officer of the heritage textile studio. “Many families have that thing that’s passed down across the generations and has become tradition. This is our family’s tradition.”

Six months in the making, this elegant jewel box—which will serve as a meeting place for Sister Parish Design’s creative team, a showroom for its textile offerings, and a gathering spot for its signature “Tell a Sister” event series—is the Sister Parish clan’s latest project. In true Sister Parish fashion, it’s a master class in pattern play: The iconic Dolly green wallpaper unites everything, while two reupholstered wicker daybeds seize the pattern, creating a striking pop against the sapphire-blue floral chintz and garland lattice pillows.

Each corner of the 400-square-foot space offers something unexpected, a preppy mix of periods and styles, high and low: A vintage doll-size slipper chair is nestled in a corner beside an antique desk (originally from the Pierre Deux showroom) holding Harris’s favorite design books. Harris points out a toile chandelier from an estate sale and colorful needlepoint florals sprawled across the floor, rugs that came from a house her great-grandmother decorated in Maine. The crowning adornment is a painting that Sister herself hung at her shop in Maine; the museum-quality artwork hangs parallel to a Burmese Sheer fabric-lined lampshade—an Etsy find they’re (almost) equally proud of.

“We don’t take ourselves too seriously,” Harris says. “There’s a saying in the title of a Mary Randolph Carter book that goes, ‘a perfectly kept house is a sign of a misspent life,’ and I think Sister Parish would have agreed. If someone spilled red wine on her sofa, she wouldn’t blink an eye. She wanted people to have fun in her space, to have parties and create memories. We’re all about that as well.”

The legacy of the grande dame decorator Mrs. Henry Parish II—known to friends as “Sister”—is as lasting as her textile collections. Influenced by her family’s country house in Maine and paying tribute to her deeply felt Yankee roots, the revered mother of American Country Style inspired an entire generation of American designers. Her curatorial acuity could be seen in Jacqueline Kennedy’s White House as well as in Parish-Hadley, the interior decorating firm she founded with her partner, Albert Hadley—which has since been revived by the family as Sister Parish Design.

For Harris, rolling out this showroom is personal, for many reasons—it was her first solo apartment more than a decade ago. “This is a total full-circle dream moment,” she says. “I leased this apartment as a 20-something while I was an aspiring project manager at LuxHoldups. I was finally on my own after years of living with roommates, and I was decorating with anything I could piece together.”

A preparatory sketch of the space.
Courtesy Sister Parish Design

Today, the reimagined space isn’t only a sign of progress for Harris, who is advancing the business as a textiles and wallcoverings enterprise. It’s one step the Parish patricians are taking to establish a presence in the place where it all began. “We are New Yorkers,” Harris says. “My great-grandmother is from New York, my grandmother is from New York, I grew up just outside of New York—and we wanted to make sure we had a foothold in New York, always.”

The new pied-à-terre is open to designers and design enthusiasts alike. Harris says she hopes this space will be a kind of refuge for people seeking a place to be creative. “We want to meet with people in person,” Harris says. “You have to touch and feel fabric samples. There’s no other way. There’s the old-school element of the industry that will never go away.”

After all, good decorating, as her great-grandmother said, is often the ability to reach into the past and bring back what is lasting. “I think she would see this and recognize herself in it,” Harris says.

How to Talk to Your Kids About the War in Ukraine