Think You Know Palm Springs Modern? Just Wait Until You See This House. 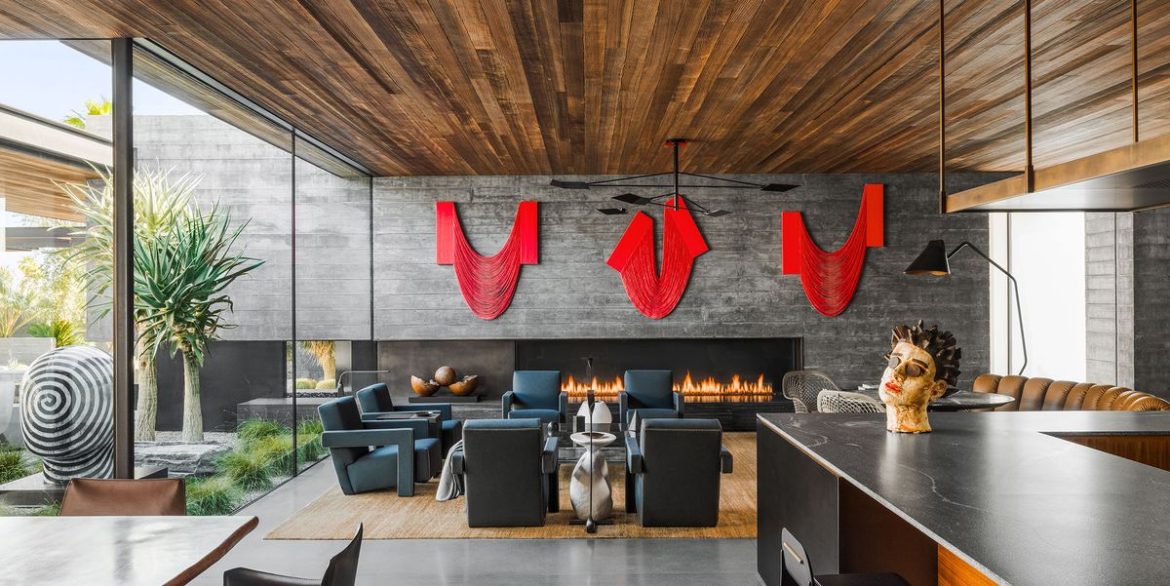 The foundation had already been poured when Marc Walters and Rick Cassar realized exactly how big their new house in Palm Springs would be. “We never talked about the square footage. We just said, ‘Oh, those are cool-looking drawings. Yeah, that looks great—let’s go for it!’ ” says Walters, a retired community college instructor. “During the build, one of my biggest fears was that it wouldn’t be inviting.”

Fortunately, both their designer and architect had a strategy for reconciling their priorities: a three-bedroom house that was large enough to entertain all their friends and family yet was also exceptionally warm and welcoming. “Cozy was the term that kept coming up,” says designer Sam Cardella, who has been based in Palm Springs since 1996. “That was the prerequisite for everything.”

A cozy 7,200-square-foot house may sound like an oxymoron, but Palm Springs architecture has long been a standard-bearer for relaxed entertaining. Starting in the 1930s, architects such as Richard Neutra, Donald Wexler, and Albert Frey came to the desert and built soigné pavilions for chilling out in the rocky landscape. With its low-slung form, deep overhangs, and emphasis on outdoor space, this house is a clear descendant of desert modernism. But it also leans into dark colors and rugged finishes to help “give the house a soul,” as Walters puts it.

“Cozy was the term that kept coming up,” says designer Sam Cardella

In retrospect, walls of board-formed concrete and ceilings of charred Douglas fir seem like the perfect combination for the couple, who met in Portland, in the heart of the Pacific Northwest. In 2014, they married and moved to Walters’s vacation home in Palm Springs, which he had previously remodeled with Cardella’s help. The couple loved the 1966 midcentury modern house in the vintage neighborhood of Deepwell but wanted a second guest room and a three-car garage to accommodate Cassar’s classic 1965 Impala convertible. They decided to start fresh on a prime lot in the Andreas Hills neighborhood, surrounded by mountain views and several hiking trails that could serve as an option for Walters’s daily workouts. 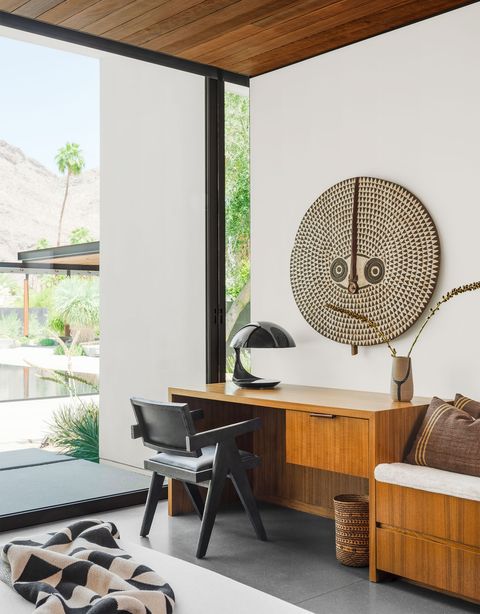 Cardella introduced the couple to the architect Sean Lockyer, the founder of Studio AR&D, a residential architecture firm with offices in Los Angeles and Palm Springs. Cardella had been itching to work with Lockyer ever since he drove by the Schnabel residence that was designed by the firm (for a Los Angeles couple, Kort and Kathryn Schnabel) and marveled at the attention to detail.

“We wanted it to be contemporary,” says Walters

Walters, who had previously built a home in Terrebonne, Oregon, and Cassar, who had been a professional home remodeler, brought many of their own ideas to the table. “We wanted it to be contemporary,” says Walters. “We love the peacefulness of a flat roof and how it creates a sculpture out of the house.” 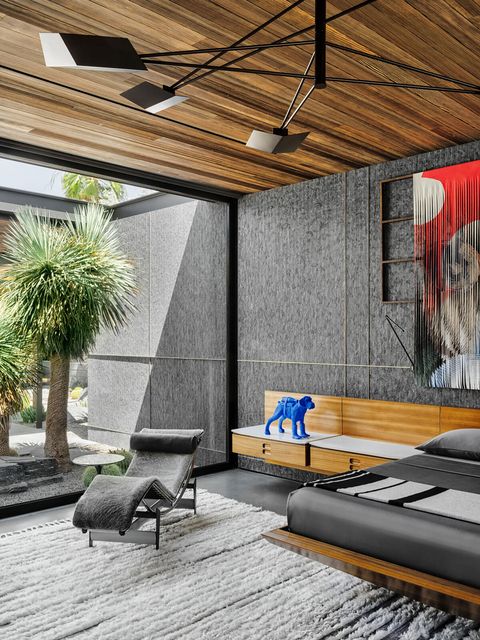 In the primary bedroom, the chaise is by Cassina.
Lance Gerber

Lockyer designed an L-shaped structure around a courtyard, with a facade of subtly tapered volumes and an impossibly thin roofline. He dropped the ceiling heights to 10 and 9 feet in order to avoid blocking the neighbors’ view, which had the added benefit of making the interiors more intimate. He shaded the west-facing exposure with a deep overhang, extending the roof to create a covered cabana. He also lined the pool in black granite so that it functions like a mirror, reflecting the landscape around it. 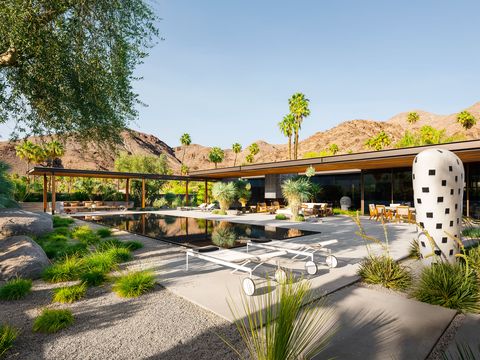 At the start, Walters explicitly told the design team that he didn’t want board-formed concrete or terrazzo, fearing that they would look too cold. Cardella was patient and persistent, however; from long experience, he knew that his client’s initial negative reaction could change. “Sam would sometimes take my emails with a grain of salt,” says Walters, who is refreshingly open about living with bipolar disorder. When the condition sidelined his early medical career, he became a teacher; a family inheritance allowed him to retire early and explore his love for rock climbing and other adventure sports as well as a passion for art and design. As he worked with the design team, Walters began looking forward to seeing how the cool tones of concrete and terrazzo would balance the warmth of the wood. The couple also collaborated with Cardella to select furnishings and artwork for the house. 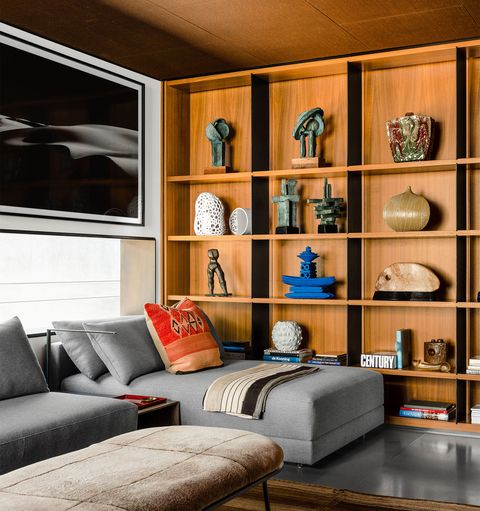 In the den and media room, the custom bookcase is in teak and hot-rolled steel. Custom sofa in a Larsen fabric from Cowtan & Tout; Jim Zivic ottoman, Ralph Pucci.
Lance Gerber

Sadly, Cassar passed away in early 2020, a year before the house was completed. The large gatherings that the couple anticipated holding have yet to take place because of the pandemic. But Walters is currently planning benefits for two local nonprofits, DAP (Desert AIDS Project) Health and AAP (AIDS Assistance Program)–Food Samaritans. “I’m through the stage of acute grief where I struggled to make sense of the loss and am now reinventing myself as a newly single person,” he says. “It’s hard, but I have a new life that includes old friends and new.” 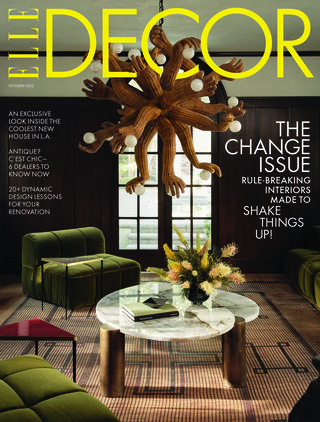 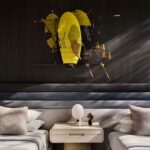 How to Turn On System Protection for Drives on Windows...
15 mins ago
While deaths are rare at soccer games, aggressive policing can...
28 mins ago
Intel’s self-driving company Mobileye files for an IPO
39 mins ago