Home » With Lofty Ceilings and Bold Colors, This Home Is the Ultimate Family Pad
Décor

With Lofty Ceilings and Bold Colors, This Home Is the Ultimate Family Pad 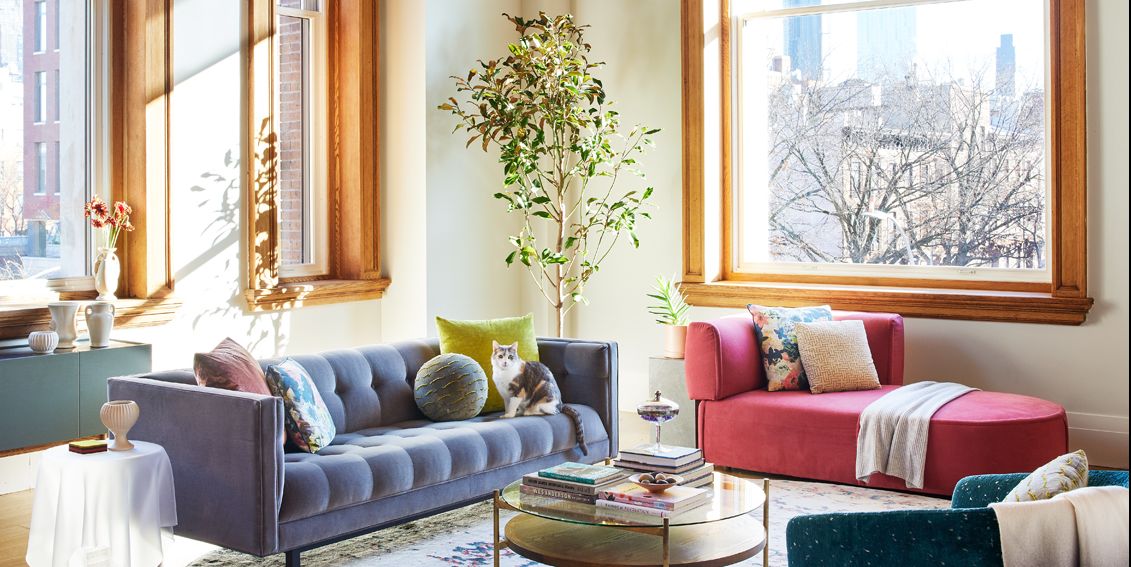 “I didn’t want a place that felt serene. That’s not who we are,” admits Brook Gesser, who inhabits this colorful Brooklyn apartment with her husband, Avi, their two teenage daughters, and two cats. “I wanted a place that was colorful and sort of adventurous, but I knew that I’d need some guidance and hand-holding.”

Gesser, who spent 11 years as a senior adviser to U.S. Senator Kirsten Gillibrand, had never used an interior designer before, but “I wanted to find somebody who I could have fun spending time with and feel really relaxed around.” Enter Danielle Fennoy of Brooklyn-based Revamp Interior Design. “I told her about my vision for the apartment, and she got really excited about it. It was a very easy choice,” Gesser says.

“She was all about whimsy, with unexpected twists and combinations in terms of play on pattern,” recalls Fennoy of her client’s vision for the 2,850-square-foot four-bedroom, four-and-a-half bath apartment they purchased in a redeveloped 1897 French Renaissance limestone building, an edifice that had once been been billed as the first “skyscraper hospital.”

“She loved jewel tones but didn’t want the place to look like it vomited color. So the joke became ‘whimsical but not insane,’ ” Fennoy says with a laugh.

Whimsy is not in the top five words that come to mind when you peer into the loftlike space. More like colorful, sophisticated, smart, textural, and light-filled. The living room, for example, with its soaring 14-foot ceilings and restored original window beams and millwork (which are found only on this particular floor of the building), is a conversation between curves—a Cassina chaise, a swivel chair by Bensen, a circular cocktail table by Yield Design, and a custom area rug that serves to at once delineate the space and speak to all the colors within. (For the record, Gesser does find the acrylic Grand Illusion side table by John Brauer, which looks like a table clad with a tablecloth, one of the more whimsical items in her home).

A view inside the eggplant-tinted main bedroom.
David Land

That spectacular ceiling extends through to the kitchen, which was left largely untouched by Fennoy, save for the backsplash, formerly white subway tile and now clad in Heath ceramic Half Hex Stack tiles in rich green tones. The developer’s lighting was banished; in its stead hang custom solid brass pendants and a quietly dramatic chandelier by Rich Brilliant Willing. “It’s a balance of some farmhouse, some really high design, and this very modern light,” Fennoy says. She adds, “If you’re walking down the street and look up at the apartment, it shines from the windows, which is really kind of incredible.”

Also pretty incredible: Both daughters were very involved in the design of their rooms, having meetings with Fennoy and choosing everything from fabrics to furniture (with Fennoy’s expert guidance, of course), resulting in spaces that reflect their true selves. One seems more eclectic—anchored by a wall of Flat Vernacular’s Fruit Doves wallpaper (Gesser’s “favorite thing in the apartment—it’s spectacular”), a space-age hanging chair, but also a collection of dolls; the other is more traditional and in sophisticated shades of pink, from the floral Anthropologie wallpaper to the draperies crafted from a Dedar fabric, which perhaps epitomizes Fennoy’s description of the project as a “really good mix of store bought and splurge.”

The couple’s bedroom is a study in deep aubergine hues—Farrow & Ball’s Brinjal paint on the walls, a custom bed with a headboard upholstered in a Romo print, and throw pillows crafted from Dedar fabric. A piece by the late artist Stan Brodsky hangs about the bed—he was a family friend, and three of his works hang in the apartment. “His pieces look like they were born in this apartment,” Gesser notes. “They are full of exuberant color and motion, the art equivalent of the feeling I wanted here.”

Despite being a newbie at the using-an-interior-designer situation, Gesser (with Fennoy’s guidance, of course) really did know what suited herself and her family, so choices were not torturous except for the wallpaper in the foyer. “The agony…it almost destroyed me,” she semi-jokes. “We went through lots and lots of different options. I’m so thrilled with the result and think we came up with something that’s really spectacular.”

Which could be said, foyer torture aside, of the entire space. “It works, but it doesn’t exactly make sense,” Fennoy admits. “My goal is never to necessarily make sense, because if that was the case, you could hire anyone!”

Sleep Apnea Can Lead to Heart Problems in Children

Kelly Ripa Cherishes Her Topless Photos From the ’90s