Inside Lea Michele’s Opening Night in Funny Girl on Broadway Share 0FacebookTwitterPinterestLinkedinRedditEmail
Lea Michele is the greatest star on her Funny Girl opening night.
The Glee alum wowed audiences on Sept. 6 as she stepped into the shoes Fanny Brice for the first time after replacing Beanie Feldstein, who left the broadway show sooner than expected in July.
Lots of big stars showed up to see Michele’s debut. An eyewitness tells E! News that Glee co-creator Ryan Murphy and Drew Barrymore were in attendance, and that Lea received four standing ovations during the first act.
The eyewitness added, “The applause and cheering have been nonstop since Lea first came on stage.”
Variety reporter Rebecca Rubin noted that Glee actor Jonathan Groff and Zachary Quinto were also in the crowd. The reporter shared a video on Twitter of Ryan and Jonathan hugging during the show’s intermission.
Rubin uploaded a snapshot of Lea’s bio on the show’s playbill, where it read that the Les Misérables performer “is thrilled to be returning to Broadway.”
E!’s eyewitness says that it was “phenomenal” to see Michele work her magic “in such an iconic and perfectly fitting role.”
Another eyewitness tells E! News the energy in the room “was crazy,” adding, “The audience was losing their minds at pretty much anything Lea did.” 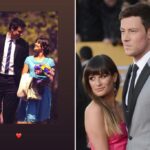 What Parents Need to Know About ‘Digital Self-Harm’