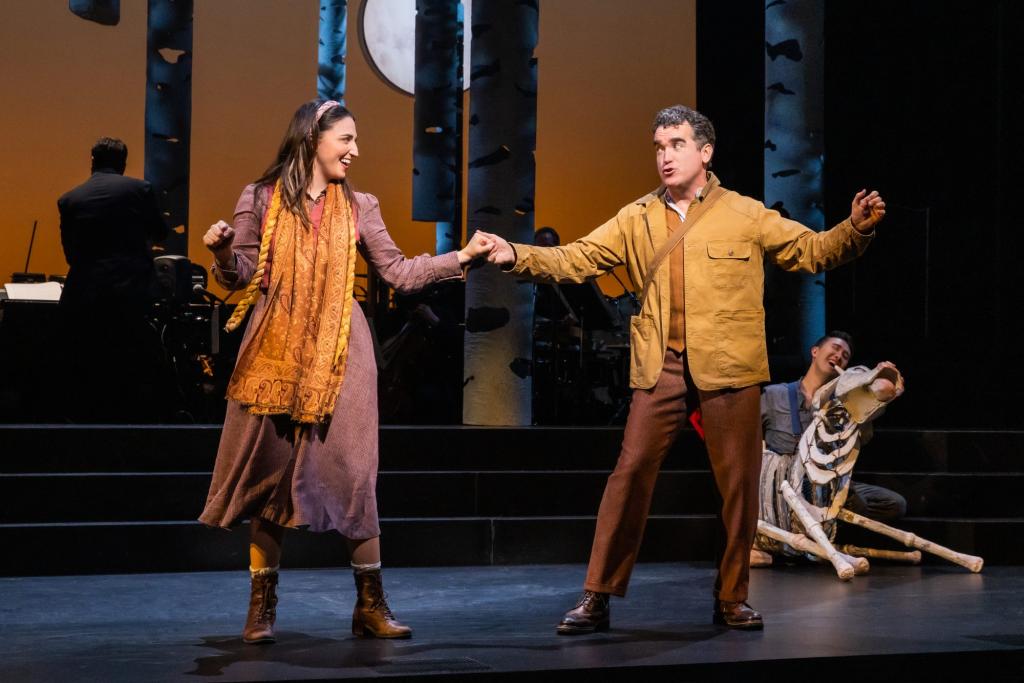 The sublime new revival of the musical “Into The Woods” that opened Sunday night on Broadway is radical.

Because there is absolutely nothing radical about it.

New York audiences in recent years have become accustomed — too accustomed, I say! — to the works of the late composer Stephen Sondheim being used as weighty canvases for the machinations of auteur directors.

Whether it’s John Doyle’s “Sweeney Todd” performed by actor-musicians on a bare stage in 2006 or last season’s excellent gender-swapped “Company” helmed by Marianne Elliott, Sondheim shows have gotta get a gimmick. The most recent Central Park revival of “Into The Woods” 10 years ago changed the old man narrator character to a little boy lost on a camping trip. Sure!

Not this latest “Into The Woods,” though. What we experience is the 1986 musical, plain and simple. (Granted, nothing Sondheim ever wrote was plain or simple.)

The new revival started as a popular, streamlined concert at City Center this spring and has been schlepped over the river and through the woods and across 7th Ave. to the St. James Theatre pretty much as is, save for some new cast members.

The costumes by Andrea Hood are basic storybook clothes; there is an actual orchestra onstage; David Rockwell’s set is a few birch tree trunks and some black steps. You do not leave thinking, “What was the director doing with all those lasers?”

The razor sharp focus here, instead, is on a divinely cast, crystal clear staging of the fairytale musical that intertwines the tales of Little Red Riding Hood, Cinderella, Jack and the Beanstalk and Rapunzel into a lesson about how adulthood has no happy ending.

You won’t soon forget Sara Bareilles’ perfect rendition of “Moments in the Woods,” a notoriously tricky song in which the Baker’s Wife tries to rationalize some taboo forest frolicking. The actress is so warm and thoughtful during the number, but also flies by the seat of her pants. I’ve never seen such a relatable interpretation — she’s the Baker’s Wife of Park Slope.

As her husband, a deep-feeling Brian D’Arcy James movingly wails “No More,” confronting the memory of his lost father. And Phillipa Soo, as a conflicted Cinderella, melts the audience with the ever-so-sad “No One Is Alone.”

There are two terrific Broadway debuts here – Cole Thompson as Jack and Julia Lester playing that peppy spitfire Little Red. Thompson is sweet and innocent as the beanstalk climber, and lifts our spirits with that goosebumps solo “Giants In The Sky.” And in Lester, we witness a major new comedic talent emerge. All her well-known jokes feel fresh, and she is unbelievably funny. My face was a lot red from laughing so hard.

Gavin Creel gets giggles, too, as the Big Bad Wolf and alongside Josh Henry as the dummy princes.

So, of all things, does Milky White the cow. The production uses an extremely expressive puppet that turns our bovine buddy into an adorable Golden Retriever. The night I attended, the role was played by understudy Cameron Johnson, who got as much applause as any singing part did.

Patina Miller’s Witch works best when the character is a cold realist — not unlike her “Cabaret” Emcee-like take on the Leading Player in “Pippin.” She’s less affecting when she painfully sings to her adopted daughter, Rapunzel, or croons that famous lesson-song “Children Will Listen.” Nevertheless, the actress is a vocal powerhouse.

“Into The Woods,” surprisingly, is turning into Sondheim’s best-remembered show over better ones like “Sweeney Todd,” “A Little Night Music” and “Company.” Act II has always been a heavy-handed thicket of rapid tragedies that doesn’t quite land, but nobody cares anymore. Thanks to the taped 1987 production and frequent high school stagings (there’s even a “junior” version for kids), the show has jammed itself into the minds and hearts of a generation of theatergoers.

Some Australian friends who didn’t know the material remarked that they felt like they were at a panto, a boisterous call-and-response type holiday show in Britain and Australia.

How wonderful it is to see a Sondheim musical inspire that sort of energy from a crowd decades later. Here’s hoping that trend sticks — ever after.