Lea Michele is one popular girl.

The “Glee” alum, 35, is stepping into the role of Fanny Brice in Broadway’s revival of “Funny Girl” following original star Beanie Feldstein’s departure.

Michele will be starring in the stage production starting Sept. 6, and tickets for her show have already skyrocketed.

According to ticket-selling company SeatGeek, seats to see the musical at New York City’s August Wilson theater are going for $570 to $2,500.

These prices also don’t include the hefty $500 service fee.

Feldstein, 29, announced that she was leaving the play earlier-than-expected on July 31 — rather than her original exit on Sept. 25.

Sources told Page Six on July 11 that she was “basically fired” before quitting the project. Her understudy Julie Benko will perform until Michele begins her run later this fall.

Stubs for July and August are going for $69, with weekday shows selling for just $49.

“A dream come true is an understatement. I’m so incredibly honored to join this amazing cast and production and return to the stage playing Fanny Brice on Broadway. See you September 6th,” Michele wrote in a statement on her Instagram earlier this week.

The “American Crime Story: Impeachment” star announced her reasoning for leaving “Funny Girl” in a candid post on Sunday.

“Playing Fanny Brice on Broadway has been a lifelong dream of mine, and doing so for the last few months has been a great joy and true honor,” Feldstein penned.

She continued: “Once the production decided to take the show in a different direction, I made the extremely difficult decision to step away sooner than anticipated.”

“I will never forget this experience and from the bottom of my heart, I want to thank every single person who came to the August Wilson for the love and support you have shown me and our amazing cast and crew,” the “Booksmart” actress went on.

Feldstein then gushed over her experience on the musical, noting: “The people I have had the great joy of bringing Funny Girl to life with every night, both on and off the stage, are all remarkably talented and exceptional humans and I hope you continue to join them on Henry Street after I depart on July 31st.”

Why Beanie Feldstein is quitting ‘Funny Girl’ even earlier than expected 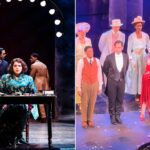 Woman sent to the doctor from having too much sex

Winter Wreath Making
27 mins ago
Don’t Make Cookies Without a Fish Spatula
31 mins ago
Germans Have Seen the Future, and It’s a Heat Pump
55 mins ago