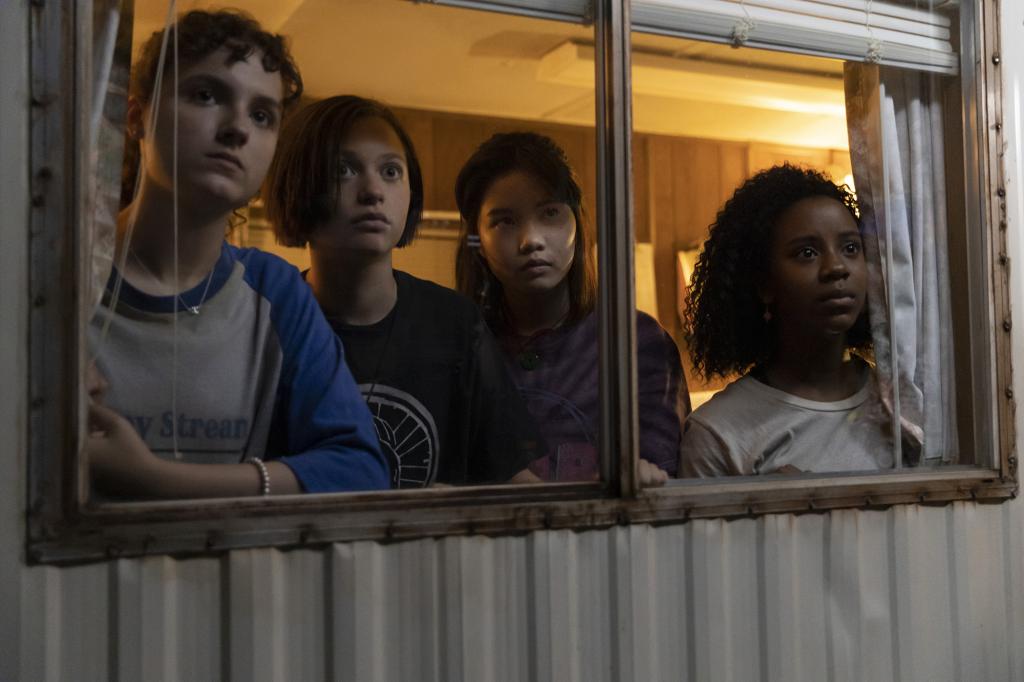 Four girls in the 1980s become caught in a time- traveling adventure in the new Prime Video series “Paper Girls.”

“I read the script before I started reading the comics, and I was immediately drawn to the depth of the dialogue,” co-star Fina Strazza, 16, told The Post. “As a young actor, we don’t get the opportunity to be trusted to play real human beings very often. So, I was immediately fascinated by the intelligence of the characters, and how they weren’t just one-dimensional.”

They’re out on their delivery route when they become caught in the crossfire between warring time-travelers and are transported to the future, where they encounter adult versions of themselves. While trying to get back to their own time, they’re also being hunted by a sinister faction of time travelers called the Old Watch.

“My parents have always taught me that the ’80s wasn’t a really great time for a lot of people, just like now there’s a lot of homophobia, racism, sexism,” Lai Nelet, 14, told The Post. “So, I really like that the show is a portrayal of the grittier and real side of that era.

“I feel like Erin is just such a jaded character from a young age, but she’s still very much a child. All of them are just kids. Erin especially tends to keep how she’s truly feeling to herself. She faces a lot of silent battles. So, I hope that her growth and struggles resonate with other people. At first it seems like she’s the wimp. She’s not as physical compared to the other girls. She has to learn to like herself and to trust herself.”

Strazzam, who is based in New York, said she prepared by reading the comics and watching coming-of-age movies such as “The Goonies” and “Stand By Me.” Although that decade, plus sci-fi elements, might invite comparisons to “Stranger Things,” she said she thinks the two shows are different.

“I’m lucky to even be considered in the same genre or field as that show,” she said. “I think our show has a different tone and message. I feel like so many ’80s shows are so nostalgic and they focused on the teased hair and fun music and loud patterns … we told this story that highlighted the bigotry that was present.”

Even though she’s a few years older than her character, since she’s also a teen, it made her easy to relate to, Lai Nelet said.

“KJ is incredibly emotionally perceptive. She has this ability to see people for who they really are. It’s funny, it’s a bit of a paradox that her biggest struggle is finding out who she herself is. I’m 16, I’m still growing up, so I have that same feeling of not knowing who I am. So, I sort of relate to all the girls. I think the show is great for anybody who feels like they may need it. It has these four girls who have such different arcs — each girl is so real and developed and genuine.”

“I notice a lot of times when kids have interactions with each other in shows, their personalities are kind of a blur,” she said. “But each character in this is so distinct and they have depth. I feel like this show is something the world needs right now — it’s so authentically beautiful.”