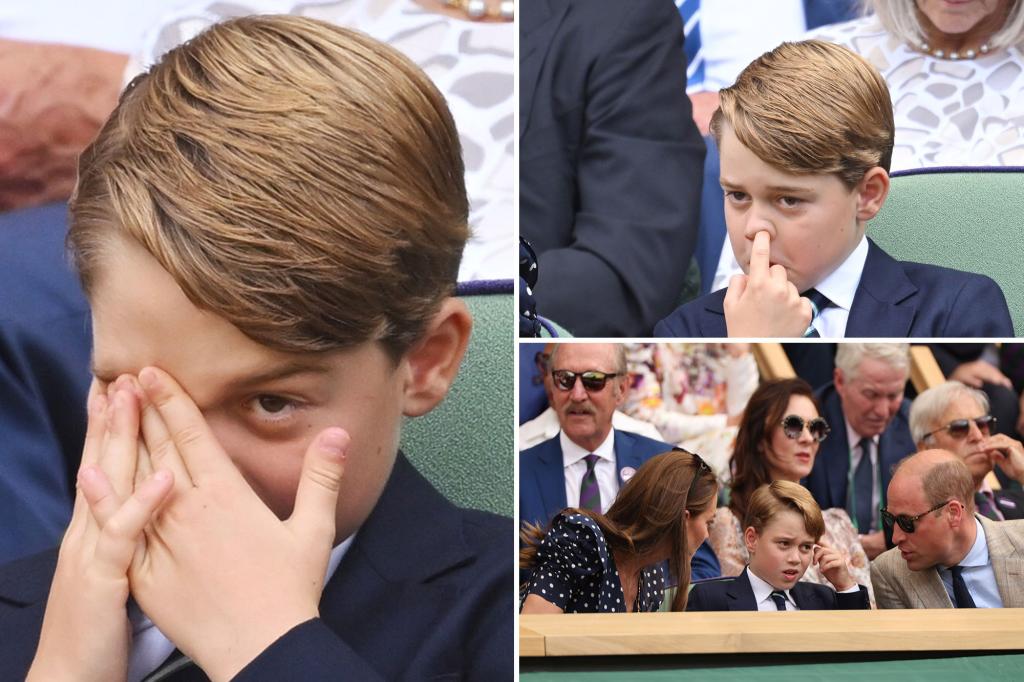 Prince George put on a spirited display during the Wimbledon men’s singles finals Sunday as he sat and watched between parents Prince William and Kate Middleton.

The 8-year-old, and oldest child of the royal couple, was animated but also appeared uncomfortable at times as temperatures reached the high 80s during the match between Novak Djokovic and Nick Kyrgios.

He could be seen rubbing his brow and eyes on occasion while sitting in a blue suit and tie. His parents leaned in to talk to George occasionally as they watched the action at Centre Court.

The youngster was also seen flashing smiles during the match in which Djokovic topped Kyrgios in four sets to take his fourth consecutive Wimbledon tourney.

It was George’s first ever Wimbledon final in the royal box, according to multiple reports. Younger siblings Charlotte, 7, and Louis, 4, were not in attendance.

George has an affinity for the sport, once training with all-time great Roger Federer, according to a report.

Federer, who called George a “cute boy” said about the young royal’s love of the sport, “I love to see that they’re into tennis or into sports,” according to UK’s Hello! Magazine.

“His mum has always enjoyed their tennis … I hope that he’ll still say the same in a few years’ time,” Federer said.

A Century Ago, This Triplex Housed Artists. Now It’s a Vertiginous Residence in the Sky

US woman killed when ‘rogue wave’ strikes Antarctic cruise ship
3 mins ago
Everywhere in Europe that travel strikes are planned in December
16 mins ago
How to Enable or Disable Dimmed Secure Desktop for UAC...
23 mins ago