Prince Harry Reacts to Not Being Allowed to Wear Military Uniform Share 0FacebookTwitterPinterestLinkedinRedditEmail
Prince Harry is hoping to keep the focus on his grandmother.
As the United Kingdom and the Commonwealth continues its mourning period following the death of Queen Elizabeth II, some may spot her grandson not wearing his military uniform during upcoming ceremonial events.
The Duke of Sussex, however, is more concerned about family than fashion.
“Prince Harry The Duke of Sussex will wear a morning suit throughout events honoring his grandmother,” his spokesperson said in a statement to E! News. “His decade of military service is not determined by the uniform he wears and we respectfully ask that focus remain on the life and legacy of Her Majesty Queen Elizabeth II.”
As a non-working member of the royal family, the 37-year-old will not be permitted to wear the garments at any of the five traditional events leading up to the late monarch’s funeral, including the final vigil which will take place in Westminster Hall. 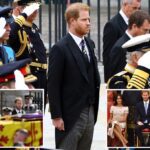