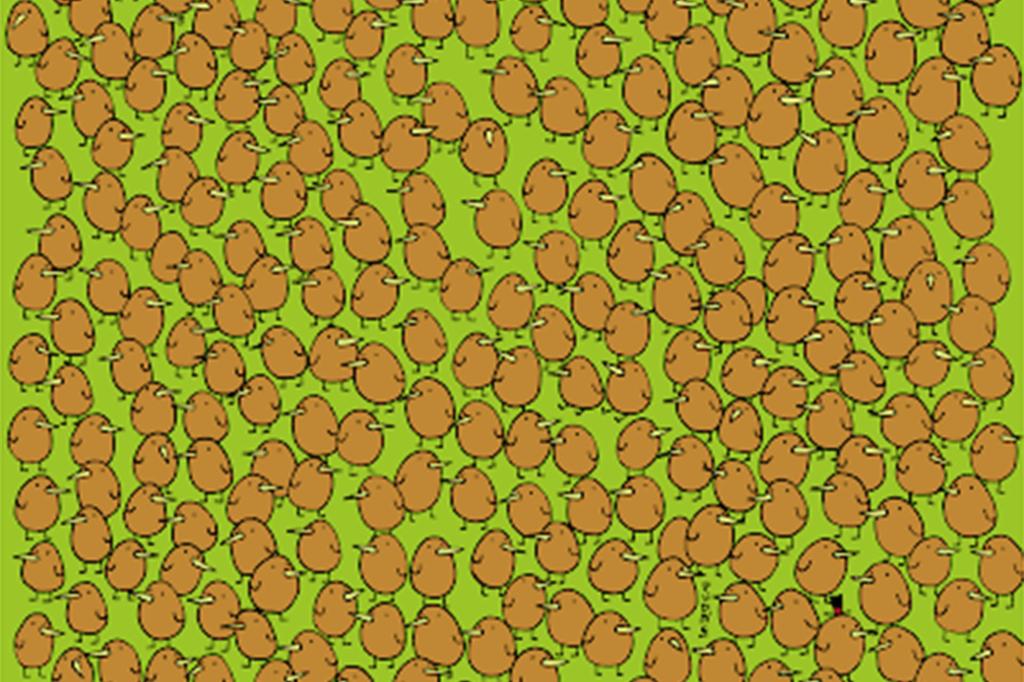 Can you separate the fruit from the flock?

Viewers are going cross-eyed trying to solve this tricky optical illusion, in which the object is to find the fruit camouflaged amongst the exotic birds.

The ornithological scavenger hunt, created by Hungarian illusion maven Gergely Dudás — aka The Dudolf — specifically challenges puzzle lovers to find four kiwis, the fuzzy fruit, hidden amongst a flock of kiwis, a species of large flightless birds with fur that hail from New Zealand.

Telling fruit from fowl might seem easy on its face. However, in this particular eye exam, the brown kiwis are nearly indistinguishable from the birds, which bear the same exact shape and coloration.

Fortunately for stumped puzzlers, Dudás has provided an answer key showing the locations of the sneaky kiwis, which we’ve included towards the end.

The kiwi quiz is one of many mind-melting illusions in the Hungarian puzzle whiz’s arsenal. In another animal-themed brain teaser last week, viewers were challenged to find the baby chicken hidden amongst the bunnies within 30 seconds. Meanwhile, anyone who can find the snake in this illusion within 15 seconds will apparently break a world record.

Optical illusions such as this are often just intended as a lighthearted diversion from the stresses of modern life — but they also hold actual scientific value for medical professionals. These brain teasers are credited with helping researchers shed light on the complex inner workings of the human mind and how it reacts to its surroundings.

Dr. Gustav Kuhn, a psychologist and human perception expert at Goldsmiths University in London, once declared to The Sun that illusions are important to our understanding of the brain: “We typically take perception for granted, and rarely think about the hard work that underpins everyday tasks, such as seeing a cup of coffee in front of you.”

Goji Berry Consumption Tied to Better Vision as You Age