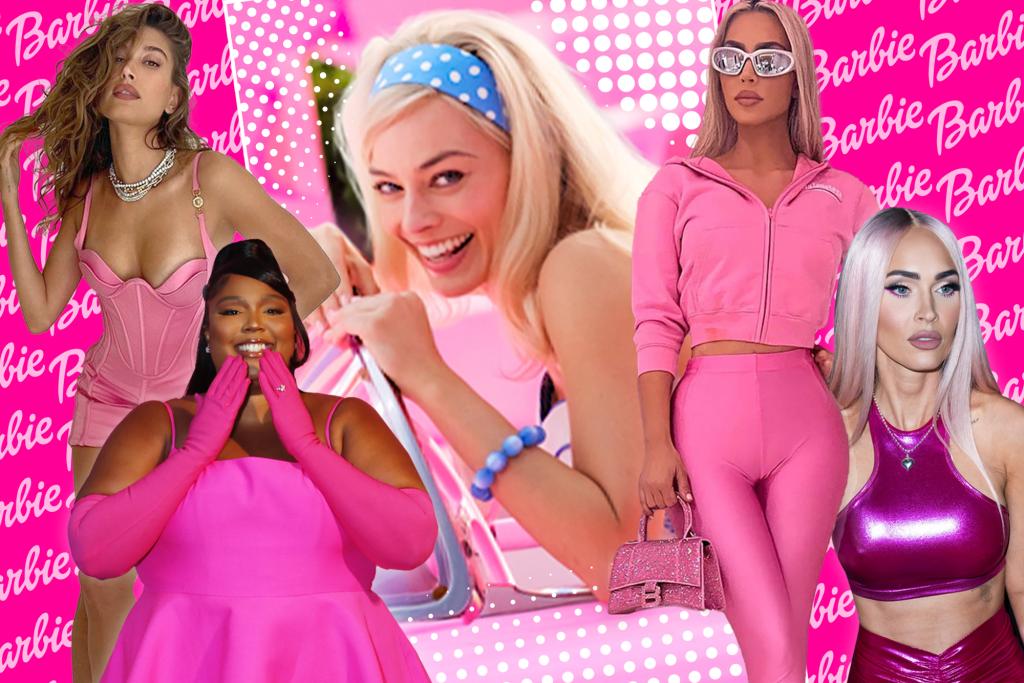 It’s a Barbie world; we’re just living in it.

Thanks to buzz generated by Greta Gerwig’s in-progress film, “Barbie,” being bleach blond and rocking hot pink ensembles is no longer limited to the iconic Mattel doll.

Plenty of Barbie girls, inspired by the movie’s star, Margot Robbie, and her parade of pretty pink outfits, have taken over TikTok, bringing the Barbiecore trend to life.

The hashtag #Barbiecore has more than 7 million views on TikTok and, according to Google Trends data, interest in Barbie has spiked to new heights as fans wait for the live-action movie, set to be released next year.

But it’s Robbie’s uncanny resemblance to the original blond Barbie that has hordes of people — and celebrities — thinking pink.

Photos of the 31-year-old Australian babe riding in a pink corvette and rollerblading at Venice Beach — with Robbie fashioned in all pink, of course — had fans reeling on TikTok, where the hashtag #MargotRobbieBarbie racked up 4.2 million views in a matter of days.

“I just wanna say that seeing these paparazzi photos of the filming of ‘Barbie’ makesme wanna see this movie so freakin’ bad,” TikToker Kirbie Johnson gushed in a clip with over 325,000 views.

And it’s not just women clamoring for Barbie, everyone’s favorite childhood toy who celebrated her 60th anniversary in 2019. Marvel’s “Shang-Chi” star, Simu Liu, signed onto the film after his agent called the “Barbie” script one of the best he’d ever read and convinced him to audition for a role.

“He literally said this verbatim,” Liu told GQ UK. “He was like, ‘If I could stake my career on any one script, it’s the “Barbie” script. I really think you should do it.’”

Director Gerwig, known for her Oscar-nominated “Lady Bird,” is putting a new spin on the plastic classic. While people might think they know what’s in store for a flick about Barbie, a doll created in 1959, Gerwig’s may not be the piece of cinema viewers are expecting.

“I wish I could just show you what we do day to day because it’s crazy,” Liu said of filming, describing the set as “wild” and “incredibly unique.”

While Gerwig is thinking of Barbie outside the doll box, Robbie’s costumes, designed by Gerwig’s “Little Women” collaborator Jacqueline Durran, for which she won an Oscar, are hitting the streets too. The toy’s aesthetic has entered the fashion zeitgeist, inspiring and A-listers and everyday dolls alike.

No strangers to being on top of trends, Khloé Kardashian was a Barbie girl for her birthday on Tuesday, while sister Kim, now a bleach blond, shared a snap on Instagram earlier in June of her wrapped in a skintight pink pants-and-heals combo, a matching cropped hoodie and, of course, a Balenciaga bag.

“I would say it’s definitely, like, future alien Barbie vibes,” the Skkn founder said of her style muse last week.

Hailey Bieber had her own bombshell Barbie moment, posing for a sexy Instagram snap on Wednesday in a bubblegum pink corseted minidress from Versace’s upcoming fall collection.

Even brunettes have been tickled pink. Lizzo donned a magenta peplum dress with matching Valentino gloves and tights, along with a sleek, doll-like high pony at an event for her reality show, “Watch Out for the Big Grrrls,” in early June.

Fellas are getting in on the trend too — and not just Robbie’s co-star Ryan Gosling, who has embodied Barbie’s beau Ken in photos from the set. Along with Machine Gun Kelly, Sebastian Stan rocked a Valentino number in a playful pink shade at the Met Gala.

Celebs and influencers aren’t the only ones passionate about pink, either.

“BarbieCore is the summer’s latest fashion trend influencing everything from clothing to home decor, and we are here for it,” Kim Culmone, senior vice president and global head of design Barbie & fashion dolls at Mattel Inc., told The Post. “Fashion is a form of self-expression and BarbieCore celebrates living boldly and authentically.

Even high fashion is heralding the hue, declaring pink the new black. Valentino designer Pierpaolo Piccioli debuted a perfectly pink collection in partnership with Pantone for his fall collection this year. At the catwalk, even the backdrop, floors, seats and runway were the same shade, letting the palette dazzle.

“Pinks are no doubt ‘having a moment.’ In fact, pink is having more than a moment,” Laurie Pressman, vice president of the Pantone Color Institute, told The Post. “It is a color family we have seen growing in popularity across the spectrum since 2013, one which sparked the intro of Millennial Pink and with the rise of the ‘gender blur’ became even more prominent. A time where we began doing away with all color rules and breaking down the boundaries.”

Pressman suggested that today’s pink explosion is about self-expression and, especially, release.

“The bright pinks and fuchsias we are seeing today are exultant and empowering. They are stand-out statements being worn with confidence,” Pressman continued. “Vibrant and high-energy. they help us to feel uninhibited and free.”

Or, as the Italian house Valentino told Forbes, it is “a liberation from the need for realism.”

“She represents ambition and female agency,” Daspin said, “and that can manifest in how someone dresses, or who they decide they want to become.”

And the answer to the latter may be fairly simple.

“Barbiecore is all about unapologetically having fun and being yourself, like Barbie,” said Mattel’s Culmone.

These are the groceries that have avoided inflation