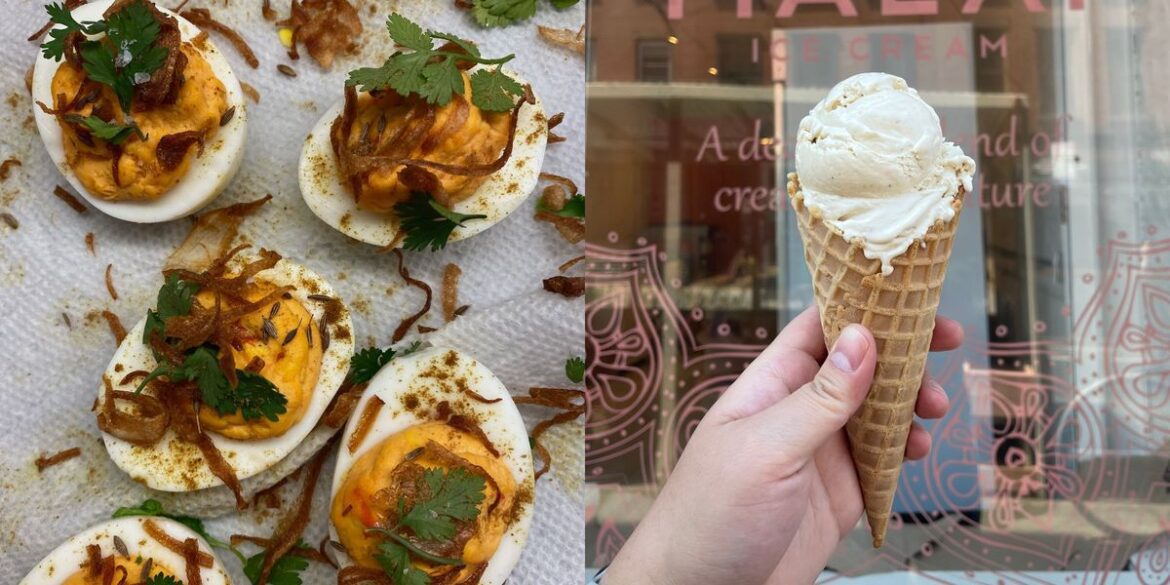 Team Delish spends all day cooking, tasting, and writing about food. While we love just about everything we try, there are always a few extra-special dishes that stand out. This month, our team sings the praises of the Delish recipes, noteworthy restaurant meals, and packaged snacks that really impressed us. Here are the best things we ate in June.

“I had the most delicious steamed mussels with coconut-milk Thai curry broth at Duck Press in Matunuck, Rhode Island, this month. I doubt anything will top it for the rest of the month, let alone the rest of the summer. When we asked for more bread (because, duh), they also gave us a side of duck butter which had small crunchy bits that tasted almost like toffee. Turns out, those bits were duck skin (normally gross, I never eat the skin on anything but… IT WAS PRETTY AMAZING).” -Jessica Musumeci, Creative Director

“I have a local spot in Norwalk, Connecticut, that I constantly visit called El Segundo. They serve a variety of food from all over the world, but specialize in their tacos which are just the best. My favorite that I ate this month was their Bulgogi! The meat is just cooked right, perfect amount of salt and seasoning and, to top it off, nice fresh scallions. They also have this soy mayo sauce which adds just a bit of spicy/tangy flavor to it.” – Carlos Dominguez, Art Director

“Justin Sullivan’s new Banana Split recipe features whipped cream with real banana puree folded into it. I have to admit, I was very skeptical when I read the recipe, but when I tasted the whipped cream, I was absolutely blown away. It was light, airy, and silky smooth, with real banana fruitiness coming through. I could have happily eaten a whole bowl of it, just by itself.” -Taylor Ann Spencer, Assistant Food Editor

“I had these Mushgarden Shiitake Mushroom Chips at the Fancy Food Show and holy cow, they are good! Crispy, crunchy, super-explosive umami flavors make for an ultra-satisfying bite.” -June Xie, Senior Food Producer

“Some of the best things I ate this month were at the Delish office: Lena’s harissa deviled eggs were my favorite thing to come out of the test kitchen. But tasting the internet-famous Tom Cruise cake was a special treat because I love all things coconut and seem to have a weakness for celebrity gifting secrets. The white chocolate bundt cake from Doan’s in California did NOT disappoint. I’m not usually a fan of white chocolate (period) but the chunks gave an extra sweetness and bit of heft to the cake’s fluffiness. Perfection.” -Cindy Augustine, Executive Editor

“I made homemade baked peach ice cream this month with my new ice cream maker! I took Lena’s baked peach recipe as inspiration and roasted them until they got jammy and a bit syrupy. Blended up with a vanilla and nutmeg-laced heavy cream, it was pretty insane. I just​ might add some crumbled snickerdoodles later, only time will tell. I highly recommend making ice cream if you’re feeling creatively blocked in the kitchen, it 100% helped to get me excited to create new recipes.” -Mackenzie Filson, Assistant Digital Food Producer

“I made the trek to the Upper East Side this month and had to stop by a New York City institution: J.G. Melon. This place has been open for half a century and they’ve barely renovated since. But don’t fix what isn’t broken, because their classic cheeseburger has become one of my favorites EVER. The patty is pretty thick (normally not my thing), but the deep brown sear on the outside adds a nice crunch. Add American cheese and some of their iconic cottage fries and I’m a happy camper.” -Gabby Romero, Editorial Assistant

“When a new location of 7th Street Burger opened in my neighborhood, I took it as my sign to visit. Their location in Greenwich Village has been on my food bucket list since I moved to New York. And it was so worth it. The Tik-Tok-favorite spot makes a killer smash burger. The patty is thin, yet juicy with crispy outer edges. The cheese is melty and messy in the best way possible—and the grilled onions and pickles are the perfect toppings. It’s simple, yet classically delicious.” -Felicia LaLomia, Food and Culture Editor

“I ate at this Trinidadian restaurant called Trinidad Golden Place in Crown Heights where the food is SUPER authentic. Tastes just like it would back home in Trinidad, which is rare.” -Marc Stauble, Video Producer

“The best thing I ate this month was the Fried Chicken Sandwich from Winner in Brooklyn. The sandwich was huge and filled with perfectly crispy chicken, fennel slaw, and mayo on sourdough bread. The best part was I was able to pick it up, take it to the park to eat it—and was the envy of everyone around. Plus it was so mighty that it still tasted good as leftovers the next day.” -Lindsay Ramsey, Director of Content Operations

“This month, I went to Malai Ice Cream in Brooklyn. I had the Masala Chai and Turkish Coffee ice cream in a waffle cone. The Masala Chai is deliciously spiced and flavorful, and the Turkish Coffee has crunchy little coffee bits which adds a subtle texture. The flavors together are the cold creamy opposite of their usual hot drink flavor inspiration. Perfect cool treat on a hot summer day!” -Allison Chin, Visuals Director

“The best thing I’ve eaten this month was the chef’s selection dinner at Traif in Williamsburg for my boyfriend’s 30th bday. We got 11 courses for only $55 🤯 The best course was a strawberry cinnamon glazed rib! It also had jalapeño and mint. It was warm but fruity and meaty and a little spicy. So weird and good!” -Brooke Caison, Food Editor

“I would be lying if I said I didn’t fall in love with everything I’ve ever eaten (and drank) from For All Things Good. The Mexican cafe and molino recently opened its second location and makes a breakfast gordita that may just outdo the classic New York BEC (bacon, egg, and cheese). That’s right, I said it. A fresh pocket of masa is stuffed with eggs, black beans, Chihuahua cheese, avocado, and habanero salsa. Pair it with a “lachata” featuring homemade horchata and espresso, and you’ll understand why I’m a regular.” -Allie Arnold, Associate SEO Editor

This content is created and maintained by a third party, and imported onto this page to help users provide their email addresses. You may be able to find more information about this and similar content at piano.io

How to Wash Silk Sheets If You Hate Wrinkles

Ice cream is better for you than granola