The term “allium” applies to a wide range of plants belonging to the Allium genus. They hail from the amaryllis family (Amaryllidaceae) but are best known for their use in the kitchen, especially garlic, onions, and chives.

Yet most alliums are incredibly ornamental in nature and are excellent companion plants.

Let’s take a moment to look at many different alliums and get an idea of how these wonderful plants can be used to spice up almost any garden.

There are many ways to categorize alliums, such as bloom time or hardiness zones, but to discuss their role in different garden settings, we’ll focus on different sizes.

That said, the topic of alliums is rather complicated, so we’ll have to begin by identifying alliums from imposters.

Is It An Allium?

There is no specific taxonomy for alliums, meaning this genus can have anywhere between 260 and 979 different species, depending on who you talk to.

However, the common thread tends to be the faint garlic smell produced by alliums, which may be obvious or only appear when the plant is bruised or damaged.

This scent allows them to repel many common garden pests, from harmful insects to deer while attracting pollinators.

This is also a crucial distinction, as many species out there resemble alliums in appearance but lack the specific smell.

Many alliums are somewhat toxic to dogs and often highly toxic to cats when consumed, but they are usually safe for humans (although we wouldn’t suggest trying to eat one that isn’t commonly used in cooking).

That said, these imposters ARE toxic to humans and lack the garden benefits of alliums, so it’s best to avoid them in favor of the real thing.

Remember, you can tell the difference between an allium and an allium imposter, such as the death camas (Toxicoscordion venenosum), simply by bruising the plant and taking a sniff (although there are a few notable exceptions to this rule).

Let’s begin by looking at the smaller alliums (i.e., those under 2’ feet tall)

These alliums are great for borders and mixing in with other small plants while providing the same companion benefits as bigger alliums.

This hybrid was created by Mark McDonough and produces clumps that are generally 1′ to 1.5′ feet tall and wide.

From June to August, 2″ inch spherical, rosy purple, globe-shaped umbels appear on stalks bringing the total height to 18″ to 20″ inches, while the foliage remains much lower, 6″ to 12″ inches high.

Reaching up to 20” inches tall when in bloom and found natively throughout much of Europe, Drumstick allium adds a lovely accent every July.

The blooms contain hundreds of reddish-purple flowers packed into a sphere to oval up to 2.3” inches across.

Note that other allium species are also nicknamed “drumstick allium” and have a similar size and shape to this one.

This tiny allium is among the most beloved due to its umbels of golden bell-shaped flowers, with as many as 60 flowers per stalk.

Despite this, the plant only grows to a minuscule 4″ to 12″ inches tall with a 2″ to 3″ inch spread and has a wide zone range of 4 to 10, making it especially popular in borders and as a container plant.

Some other notable alliums in this size ranges include:

Coming in at 2′ to 3′ feet tall, medium alliums are just the right height range to fit in both borders and backgrounds and between when making a tiered display.

This 2′ to 3′ foot tall cultivar grows in zones 4 to 8 and has won numerous awards.

The secrets to this success are the massive 10″ inch globes filled with purple flowers that last from late spring into early summer.

This award-winning cultivar can be grown in zones 4 to 9 and lives up to its name.

At 2′ to 3′ feet tall and up to 2′ feet wide, this plant will produce 3″ inch-wide, perfectly spherical inflorescences from late spring into early summer that consists of tiny violet-purple star-shaped flowers.

Add to that the 6 to 8 blue-green strap-shaped leaves, and it’s no wonder it’s so popular!

While its range is relatively small (zones 6 to 9), this 2′ to 3’ foot tall allium is worth the effort to grow in containers elsewhere.

But the prominent white stamens make these long-lived blooms stand apart, which gives them a snow-tipped appearance.

A few other great mid-sized alliums include:

If you’re looking for a show, we’ve saved some of the best for last.

Alliums that are more than 3’ feet tall can be real showstoppers with massive flowerheads, either integrated into a display of similarly tall flowers or left to tower above a smaller display of ornamental grasses or flowers.

When planted in zones 4 to 8, the blooms appear from late spring into early summer.

It’s not uncommon to see this one planted in groups along borders to provide a bold statement.

Towering above all others, Giant OnionGiant Onion has a 1″ to 2′ foot spread and can be grown in zones 6 to 10.

It bears bell-shaped flowers from May into early June, gently drooping from long pedicels, with cream petals marked by a single maroon streak down the middle of each, flared tips, and a greenish base.

The foliage is blue-gray and, despite the sweet-sounding name, can give off a strong musk when the plant is cut. 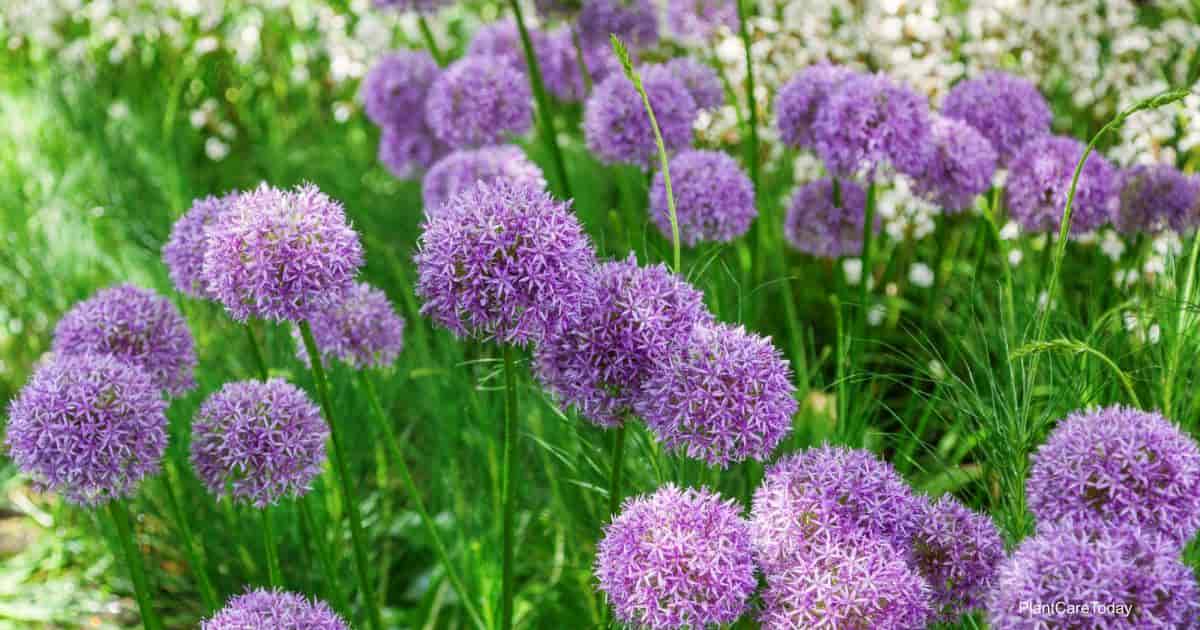 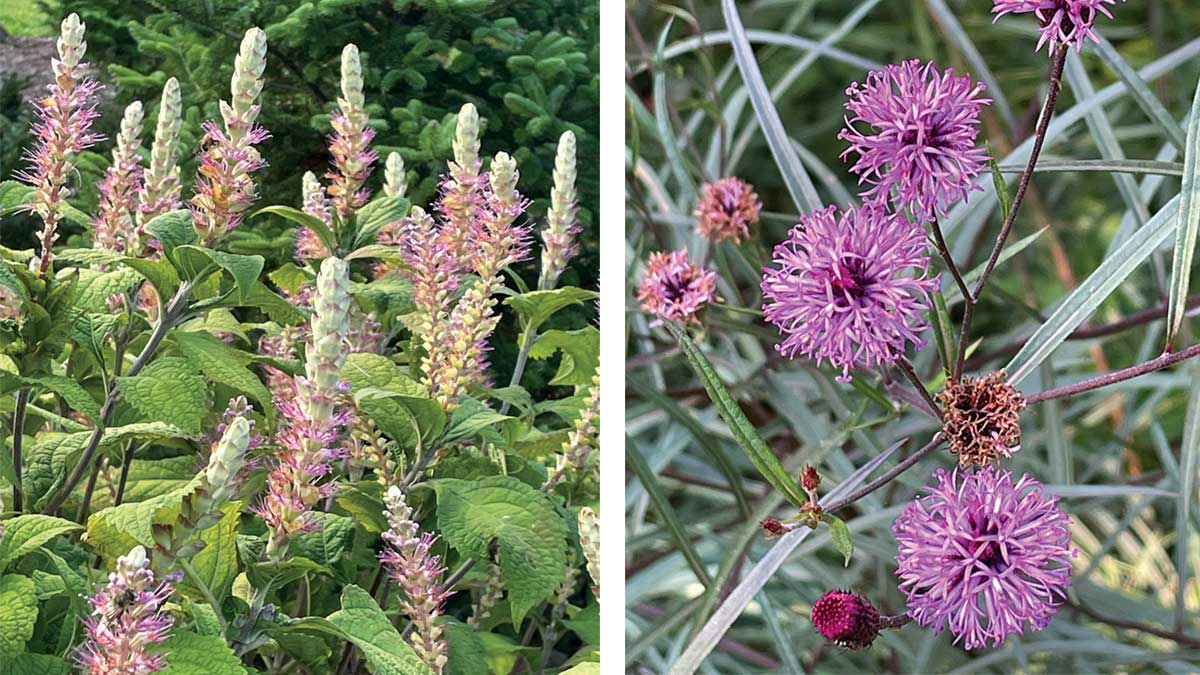 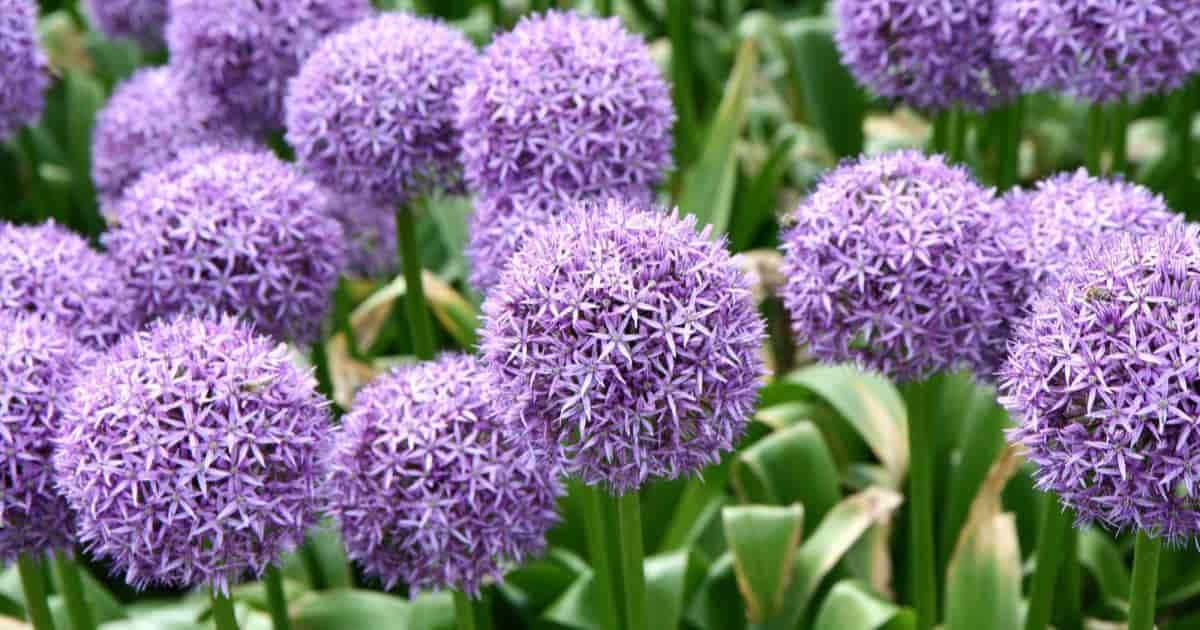 What Is A Giant Allium? Do Giant Alliums Spread?
Share 0 FacebookTwitterPinterestLinkedinRedditEmail