Home Garden Why Are My Calatheas Leaves Turning Yellow?
Garden

Why Are My Calatheas Leaves Turning Yellow?

Calatheas are stunning plants, but not because of any flowers or spectacular leaf patterns (although some species are variegated). Instead, the 60 existing Calathea plants are among the most famous exotic houseplants known as “prayer plants.”

Special nodes at the base of their leaves serve as joints, opening each leaf pair wide during the day, angling them to maintain just the right amount of sun, then folding up into a prayerlike pose at night.

These are very easy plants to care for, but they’re not without a few problems if you fail to maintain their basic care needs.

When this happens, the plant will get stressed and cry for help through one or more clear signs. Of these, perhaps the most common sign is yellow leaves.

Unless you have variegation that includes yellow, it’s never good to have yellow leaves on a Calathea.

This common warning sign can mean a lot of things, making it a little confusing to treat, but this can often be solved by examining other symptoms or through the process of elimination.

Here are some of the reasons your Calathea leaves are yellowing.

This one can catch people off guard if they’re not paying attention. As the older lower leaves reach the end of their lives, they’ll turn yellow.

This is perfectly normal, as the plant is recouping its resources to invest in younger leaves, and you can simply prune away these dying leaves.

Perhaps the most common cause of indoor plant problems is also the easiest to prevent.

Underwatering can be difficult to identify without sticking your finger in the soil, as it can produce watering but also shares symptoms with root rot.

The soak-and-dry method is perfect for any plant that doesn’t totally obscure the ground beneath it (such as groundcovers and grasses), and it ensures you won’t overwater or underwater your plants.

Begin by sticking your finger straight into the soil to check its dampness.

For Calathea plants, it’s best not to water until the soil feels dry 1″ to 2″ inches down (to the first or second knuckle, respectively).

Use distilled or natural rainwater and pour slowly and evenly, so the soil is soaking up at the same rate you’re pouring.

Work your way around the plant, but don’t get the Calathea itself wet.

Stop when you see moisture beginning to seep from the container’s drainage holes or the soil surface is no longer able to absorb all the water as fast as you’re pouring.

Calatheas need at least 8 hours of bright, indirect sunlight per day. When they’re not getting enough, they can turn yellow.

The leaves may scorch if exposed to direct sunlight, causing yellow leaves. Finally, sudden changes in lighting can also cause plant stress and yellowing.

The natural color of the leaves further exacerbates this.

Those with reddish leaves tend to fare better with a little less light, while green needs brighter light, and variegated leaves will lose their color if they don’t get enough sun.

Find a good east or west window to catch the sun when it’s less harsh.

Alternatively, you can place the plant beside a southern window where the sun[‘s rays won’t hit it directly or use a sheer curtain to filter the light.

These little vampires suck the sap right out of your plant’s leaves, causing the leaves to fade and turn yellow as they lose chlorophyll.

A neem soil soak can eliminate these infestations and help prevent them.

Meanwhile, fusarium wilt is a common fungal infection that can cause the leaves to wilt and turn yellow while making the stem veins brown.

Root Rot is another nasty which destroys your plant’s root system, leading to symptoms of underwatering and malnutrition.

You’ll need to uproot the plant and discard the old pot and soil in both cases.

Rinse all traces of soil from the plant (and prune away any diseased roots in the case of root rot, which will be brown or black and mushy), then repot in a new pot with fresh, sterile soil.

Finally, this is one of many plants susceptible to the cucumber mosaic virus, an incurable and highly contagious plant disease.

When this is the cause of yellowing, the only recourse is to carefully dispose of the plant, pot, and soil so the disease won’t spread.

Tropical plants are used to very high humidity levels, although they need a little less than indoor plants.

Of these, the most tolerant to low humidity is the rattlesnake plant (Calathea lancifolia), although not by much.

Symptoms can include browning or yellowed leaves and leaf curling.

For remedy, give your Calathea a pebble tray or humidifier, or group it with other plants.

Your prayer plant doesn’t need a lot of fertilizer, and the exact amounts and HPK ratios can vary a bit between species and cultivars.

When you give your plant too little fertilizer, it may become malnourished and suffer from some yellowing.

More seriously, giving it too much fertilizer can cause chemical burns to the roots and stem, leading to yellowing and other damage.

You’ll need to uproot the plant, rinse the roots well, and repot it in fresh soil.

Also, remember that you might need to flush the soil occasionally to remove any mineral salt buildup unless you’re repotting every 2 to 3 years with fresh soil.

Two different factors can cause this problem.

Ensure your plant’s container has adequate drainage holes so excess water can escape.

Secondly, the soil may be compacted and need to be amended.

Try mixing in perlite, vermiculite, or coarse sand so that up to 30% percent of your potting mix is an aggregate.

On a related note, if you see roots poking from the drainage holes or soil surface, your Calathea plant is rootbound.

This can cause the roots to become so compacted that they have trouble absorbing nutrients and moisture, leading to symptoms resembling underwatering while also causing the soil to retain excess water.

This can be solved by simply repotting the plant in a slightly larger container.

Calatheas do best in a temperature range of 62° to 81° degrees Fahrenheit.

Straying too far from this range or exposing the plant to sudden drafts or other quick temperature shifts can shock the plant, resulting in leaf yellowing.

The solution for this particular problem is simply keeping it in a room where the temperature stays within this range.

More On Growing and Caring For Calatheas 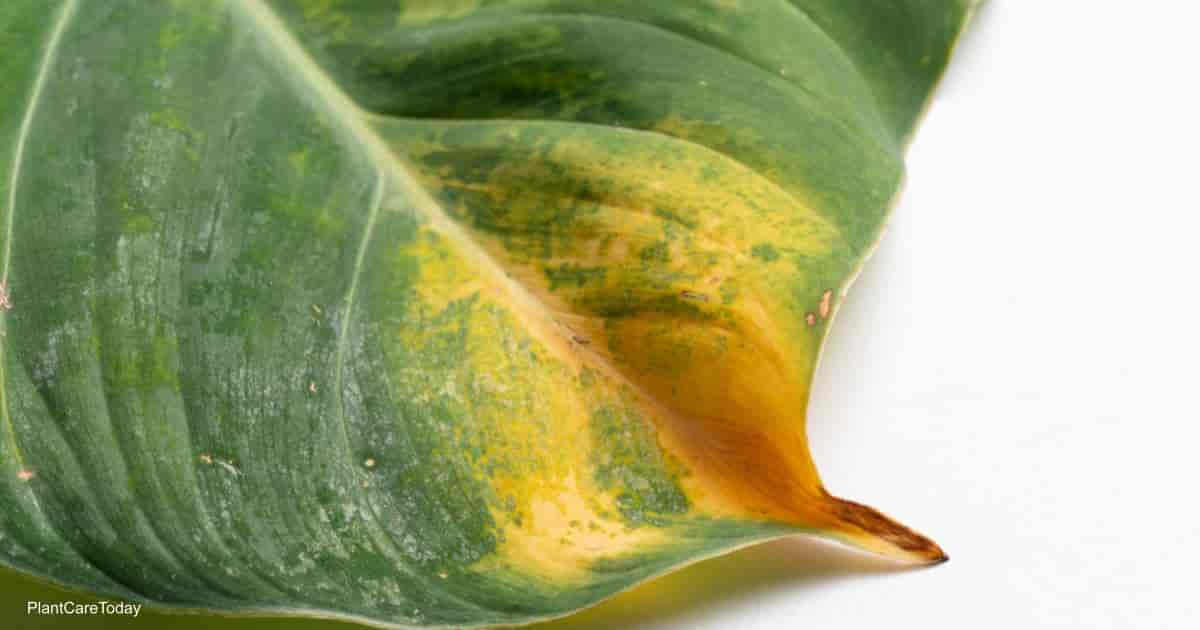 Why Are My Philodendron Leaves Turning Yellow? How to Add Shortcuts for Opening USB Drives to Windows 10

U.S. Sees Opportunity for Ukraine to Capitalize on Russian Weakness