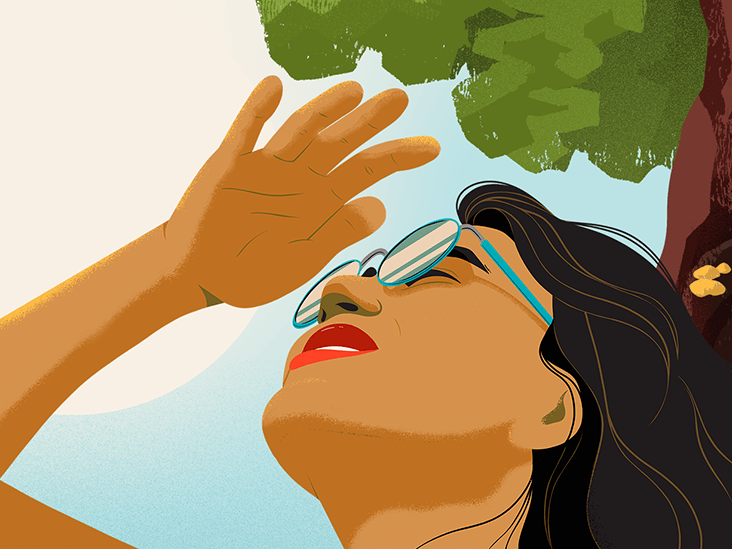 Climate change is becoming a part of everyday life.

From heat waves to early blossoms to unexpected snowfall, it’s making itself known.

While it’s important to do your part to care for the environment in light of this, it’s also important to take care of yourself.

After all, humans aren’t separate from nature.

This is particularly true when it comes to your skin. Read on to learn how.

The skin is the body’s largest organ and the part of the body that interacts most with the environment. That said, taking care of your skin shouldn’t be an afterthought.

While considering the impact of climate change on your skin may bring to mind sun protection and the threat of skin cancer, there are other ways your skin can be impacted.

“Extreme weather conditions can lead to all sorts of problems, from dehydration to sunburn,” says dermatologist and co-founder of Unity Skincare Allison Leer. “Air pollution and other environmental factors can also take their toll.”

The impacts of climate change that may affect the health of your skin include:

These factors may contribute to a number of skin and health issues, including:

Think of the ozone as Earth’s SPF. As it thins or dissipates, more and more UV radiation leaks through.

Older 2011 research estimates that a reduction of just 1 percent in the ozone layer’s thickness increases the incidence of squamous cell carcinoma by 3 to 4.6 percent, basal cell carcinoma by 1.7 to 2.7 percent, and melanoma by 1 to 2 percent.

Already the most common cancer in the U.S. according to , skin cancer rates continue to rise worldwide.

When fossil fuels burn, carbon dioxide and other pollutants like polyaromatic hydrocarbons release into the air.

According to a 2021 review, these nanoparticles, also known as PM2.5, penetrate the epidermis and may pass through the skin via follicles and glands. Exposure to traffic emissions demonstrated a 20 percent increase in pigmented facial lesions. A large fraction of PM2.5 is comprised of black carbon, a known carcinogen. The carcinogenicity of these particles is enhanced when it forms aerosols with toxic metals and polycyclic aromatic hydrocarbons.

Both atopic dermatitis and immunopressant medications can increase the risk of skin cancer.

According to the American Academy of Dermatology Association (AAD), rates of acne are increasing, affecting about 85 percent of Americans between the ages of 12 and 24.

Climate change can alter the pH balance of our skin. Increased sweating and oil production can also increase acne breakouts.

Climate change can lead to increased UV radiation and environmental pollutants that cause free radical damage, compounding the effects of sun exposure.

A 2019 study noted that air pollution increases oxidative stress in the skin and results in or worsens premature skin aging.

Higher temperatures and humidity can lead to more sweating, triggering flare-ups for individuals with eczema and psoriasis.

It can also lead to other skin conditions such as rashes, athlete’s foot, and hives.

According to older , there is some evidence indicating that people may be at higher risk for eczema in urban areas, suggesting pollution may play a role in triggering flare-ups.

Dermatologist and Scientific Advisory Board Member for the National Eczema Association Peter Lio agrees that inflammatory skin conditions will continue to get worse, especially eczema.

“Eczema has been around forever, but it’s skyrocketed in industrialized western societies as our lifestyles have become more sanitized and the bacteria in our skin and gut microbiomes have become less diverse,” says Lio. “A rapidly warming planet means this trend will continue—and likely increase.”

Lio also notes that eczema can be triggered by environmental factors like:

Climate change can impact your skin in ways you may not realize. Take flooding, for instance.

Flooding is the most frequent and deadly disaster worldwide, and a found that climate change is likely adding to the frequency and intensity of extreme river flood events.

shows that skin diseases due to contamination exposure are one of the most common health impacts of flooding.

These impacts include an increase in infectious diseases, like:

They may also increase the incidence of skin conditions, such as:

There are several types of infectious diseases, including vector-borne, viral, and fungal. All of these can be increased due to the effects of climate change.

These diseases are viruses, bacteria, or protozoa transmitted by living organisms.

A prime example is Lyme disease, which , according to dermatologist Caroline Nelson, MD, FAAD.

Lyme disease is often carried and transferred to people by parasites known as ticks. In general, warmer temperatures in winter mean more ticks are likely to survive and spread Lyme disease outside their typical geographic locations.

Increased contact between infected ticks and humans is another factor contributing to an increase in Lyme disease.

According to the Environmental Protection Agency, changes in land use, including farmland restoration and development in wooded areas, put humans closer to ticks and tick carriers such as deer and white-footed mice.

Lyme disease has several symptoms, many unrelated to skin health. However, it can trigger skin issues, including large rashes (erythema migrans) and skin infections ().

Other emerging diseases include the tick-borne disease anaplasmosis, dengue virus, and mosquito-borne togavirus.

According to Dirk Elston, MD, FAAD, climate change increases the spread of these diseases. The increase in temperatures is causing ticks usually found in the south to be more prevalent in the midwest and northern regions of the United States.

There are several examples of an increase in infectious diseases due to climate change.

One example is a that shows a weather-related relationship between the incidence and severity of hand, foot, and mouth disease.

Similar findings from have been shown for fungal skin disease as well.

In regards to our changing climate and your environment, following these practices will help you take care of your skin in the best way possible.

The single most important thing you can do for your skin against UV radiation is to apply sunscreen, even when you don’t think you need it.

Apply sunscreen with a 30 SPF or higher anytime you’re outdoors. The even applies on cloudy days and if you’re only outside for 10 minutes.

It’s essential to take care of your own skin first. If it’s possible, you can also use reef-friendly sunscreen.

A 2018 study done by the International Coral Reef Initiative and the Swedish government concluded that conventional sunscreen negatively impacts the world’s coral reefs.

Leer suggests people avoid being in the sun during the hottest part of the day, between 10 a.m. and 4 p.m.

If you can’t avoid these hours, consider wearing a higher SPF sunscreen and reapplying every 60-90 minutes.

You can check the air quality through various websites and apps, including the U.S. Environmental Protection Agency’s (EPA) app AirNow.

Using an air filtration system in your home is also an excellent measure to take.

This one is essential, climate change aside. Staying hydrated helps your skin maintain its elasticity.

If you can, use a reusable water bottle instead of buying bottled water to keep your hydration efforts sustainable.

A 2019 study shows the importance of vitamin E and vitamin C in skin health, especially in protecting against UV radiation.

To combat this, make sure to include plenty of antioxidant-rich foods in your diet, including:

Although taking oral supplements of vitamin E or vitamin C alone showed no benefits, studies reported a decrease in UV-induced inflammation when taken together.

According to 2019 research, a diet lacking in selenium can lead to damage from oxidative stress, resulting in premature aging.

The same study noted that taking an oral probiotic accelerated the recovery of skin immune function after UV radiation exposure.

The gut and skin are closely correlated, so taking a probiotic may help with both gut health and skin health.

Pollution and other environmental stressors can contribute to free radical damage. A topical application can help neutralize free radicals and prevent and treat skin changes.

While both vitamin E and vitamin C have shown some positive effects, many studies note that vitamin C used with vitamin E is more effective at protecting against outdoor stressors.

The two vitamins act together to inhibit:

It’s not just the heat and UV radiation that’s the problem. It’s also what we wear in that heat that can increase our sunburn and skin cancer risk.

Consider UPF (ultraviolet protection factor) clothing for considerable sun exposure. Fabric must have a UPF of 30 to qualify for The Skin Cancer Foundation’s Seal of Recommendation, but they prefer UPF 50+.

Wide-brim and tightly woven hats are the best types for sun protection.

No single person will reverse climate change, but we can all do our part. These changes can have a domino effect on the world around you.

If you’d like to do what you can to help the planet, here are some ideas and resources to consider.

These action-based suggestions can be practiced individually but still have a significant impact.

Going 100 percent plant-based is not something everyone wants to do, but the reality is that implementing these habits, if and when possible, does have a positive impact.

You may have heard “reduce, reuse, recycle,” but there are actually 5 R’s!

Vote with your wallet

As long as large corporations and mass consumerism have the most significant effect on the planet, not much will change due to supply and demand.

However, if you make changes and start “voting” with your dollars, corporations have no choice but to change if they want to survive.

Organic foods and products become more widely availability and in some cases, cheaper, as demand grows.

Ideas to vote with your wallet:

This practice isn’t perfect by any means, and the responsibility for climate change shouldn’t fall to the individual. However, small, beneficial changes are a step in the right direction.

You can also look for local and community organizations to support.

Access to sunscreen and sun protective clothing, air conditioning, and air filtration systems are luxuries not afforded to many, especially marginalized groups.

These groups not only have less access to proactive measures, but health care inequality compounds the effects.

Skin cancer can affect anyone regardless of skin color. People of color are often diagnosed in later stages when it’s more challenging to treat. According to , non-Caucasian patients are less likely to survive melanoma.

There’s a clear correlation between climate change and skin health, and this topic deserves more attention, including advocacy and access to prevetion.

Global action is also needed to mitigate the negative impacts of climate change on the environment and human health.

However, there are many ways we can make changes individually for our health, skin and otherwise, and the planet’s health.

Healthy People, Healthy Planet is a celebration of the connection between humanity and the environment in which we live, with a focus on the food that keeps us going. You’ll find practical ways to make an impact on an individual and global scale, starting with what you put on your plate and beyond. 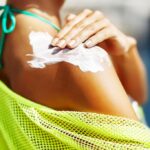 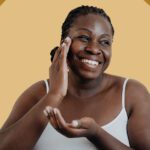 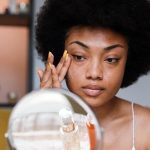 11 Vitamin C Serum Benefits and How to Use