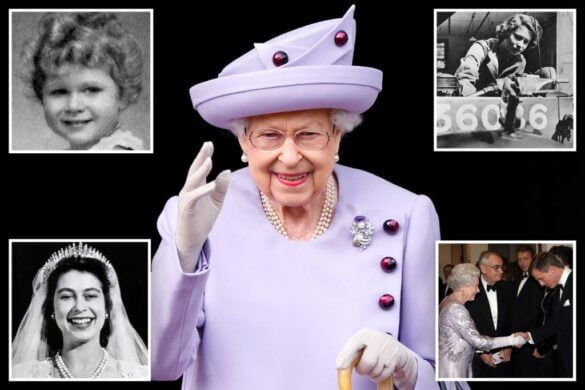 Her late royal highness lived life to the fullest.

And even before assuming the throne as Britain’s longest reigning monarch after her father, King George VI, died in 1952, Queen Elizabeth II’s existence abounded with regal adventure and excitement.

From first crossing paths with the love of her life, Prince Philip — who died at 99 in April 2021  — at age 8 to learning how to drive at 18 while serving in World War II and, thus, becoming the only citizen of the UK who was legally permitted to operate a vehicle without a driver’s license, the majestic nonagenarian enjoyed a drink (or two) while living the high life.

Here’s a list of the Top 10 most fascinating, little-known facts about the dearly departed queen, who died at the age of 96.

While her eminence was well-versed in foreign affairs, religion, constitutional history and law, she never attended school — nor did she hold a college degree. Rather than matriculating at an institution alongside kids her age, the queen, who during her formative years was known as Princess Elizabeth, and her younger sister Princess Margaret, who died in 2002 at age 71, were home-schooled by Britain’s best tutors — including Henry Marten, who went on to become provost of Eton College. The rising queen’s courses in religion were led by the archbishop of Canterbury, and she learned to speak fluent French from her various governesses.

She was riding dirty

Although the royal chauffeur was dutifully at her beck and call, the queen fancied tossing on a pair of chic sunglasses and a silk Hermès head scarf, and jumping behind the wheels of her beloved Jaguar or Range Rover for a joyride. However, she never held a driver’s license. In 1944, at the age of 18, a then-Princess Elizabeth insisted on joining the army and learned how to drive as a mechanic for the women’s Auxiliary Territorial Service during World War II. Her highness was not required to have a license, a license plate on her cars or a passport for international travel.

As it pertained to passports, specifically, the royal family’s official website explained: “As a British passport is issued in the name of Her Majesty, it is unnecessary for The Queen to possess one.” In fact, all other members of the queen’s bloodline, including her son Prince Charles, have passports.

Bridal ballin’ on a budget

All dressed in white for her betrothal to Prince Philip at Westminster Abbey on Nov. 20, 1947, the would-be Queen of England donned a dazzling fit-and-flare gown by Norman Hartnell, which she purchased with post-World War II rationing coupons. Owing to the country’s lingering financial crisis in the years after the war, the British government introduced rationing coupons to ensure that each citizen had access to “fair shares” of food, goods and materials — including the silks, tulle and chiffon used to create her majesty’s big day finery.

Women from across the UK were said to have gifted their clothing coupons to the future queen, in the hopes that she would be able to use the vouchers towards her dream dress; however, it was illegal to share the coupons at the time, and they were all returned. Adding to her radiance on her wedding day, the queen-to-be also wore her grandmother Queen Mary’s diamond tiara. But just two hours before the ceremony, the delicate crown snapped when Queen Elizabeth’s hairdresser tried to secure it to her 13-foot veil. Luckily, the tiara was transported, under police escort, to the royal jewelry workshop, where it was welded back together in time for the vow exchange.

She vegged out on love

While commoners beyond the walls of Buckingham Palace dared not address Elizabeth outside of her royal designations, inside her grandiose abode she was reportedly known as “Cabbage” during her 74-year marriage to Prince Philip. In 2006, British biographer and historical consultant on Netflix’s “The Crown,” Robert Lacey, confirmed that the prince often borrowed the name of the green, leafy vegetable to affectionately refer to his wife. And while some have speculated that the pet name originated from the French phrase “mon petit chou,” which loosely translates to “my little cabbage” or “my little sweetie,” it’s unclear why Prince Philip — her majesty’s third cousin from Corfu, Greece, who she first met at a royal family wedding in 1934 — chose the nutritious-sounding endearment. Nonetheless, it was a testament to their healthy love.

Queen Elizabeth rarely graced any scene sans one of her signature Launer black leather handbags. And while it was rumored that her majesty never carried cash in her purses, she reportedly always toted an ironed and folded bank note for church-service collections. Owing to the fact that her face is plastered on bills in at least 33 countries, money was never an issue for the queen — who, as the top executive of the royal family, was said to be valued at approximately $50 billion or $10 billion more than Coca Cola. In 2015, it was reported that she even dropped a cool $8 million on a sprawling three-bedroom apartment in Midtown Manhattan.

Her not-so-humble abode, with views overlooking the United Nations complex, was said to be inside a 43-story, gated building that featured architecture and interiors from lauded British creative Norman Foster.

Each morning, at 9 a.m., the royal bagpiper would play for 15 minutes outside of the monarch’s window, signifying that it was time to start the day. The tradition, first started by Elizabeth’s great-great-grandmother, Queen Victoria, in the mid-1800s, reportedly took place at the queen’s residences at Buckingham Palace, Windsor, Holyroodhouse and beloved vacation home in Balmoral, Scotland. Who needs an alarm clock when you’ve got talented musicians on staff?

Cheers to her grace

Whether day or night, the queen liked a drink. And as a salute to the sun, the monarch would knock back a smooth gin and Dubonnet cocktail with lemon and ice each morning, former royal chef Darren McGrady revealed in 2017. (It’s likely a drink hit the spot after being startled awake by the screeching clamor of bagpipes.) As the day progressed, her royal highness washed down her lean-protein lunch — a meal during which grilled fish, chicken or dove was the main delectable — with a glass of wine or Champagne. And before resting her crown after a long day of reigning and ruling, Queen Elizabeth would top off her evenings with a dry martini and another bubbly splash of Champagne. And while the libations were her daily go-to treats, her majesty was also said to have an occasional taste for Bacardi rum, Gordon’s gin, Bulmers cider and Pimm’s liqueur.

Her word was ‘Bond’

The silver-haired sovereign made a cameo opposite actor Daniel Craig as James Bond in the opening visuals of the 2012 London Olympics. When the director of the 007-centric skit requested the queen’s permission to use her likeness, her majesty countered the inquiry with an offer to not only appear in the clip, but to also take on a speaking role, royal dresser Angela Kelly revealed in her 2019 memoir, “The Other Side of the Coin: The Queen, The Dresser and the Wardrobe.” For the production, the queen masterfully recited her line, “Good evening, Mr. Bond,” before she and the debonair spy boarded a helicopter. (A couple of Elizabeth’s beloved corgi pups managed to make their way into the short film, too.)

The queen of the pack

With an enormous heart for animals, Queen Elizabeth owned well over 30 corgis, and even bred them herself. She initially fell in love with the four-legged darlings after her father, King George VI, acquired the royal family’s first corgi, Dookie, in 1933. Later, when her sister Princess Margaret’s dachshund Pipkin mated with one of the queen’s corgis, her majesty was credited with helping to create “the dorgi” hybrid.

In addition to her affinity for pups, a passion that earned her the role as Patron of the Dogs Trust canine-welfare organization in the UK, Queen Elizabeth also owned every variety of mute swan, whale and dolphin within her territory. Since the 12th century, the crown has claimed ownership of all mute swans in the country because the birds were “highly valued as a delicacy at banquets and feasts,” per Reader’s Digest. And a prevailing legal statute, dating back to 1324, permits that England’s ruler “shall have whales and sturgeons taken in the sea or elsewhere within the realm.” Under this law, whales and dolphins are revered as “fishes royal.”

Hats off to her style

A fashionista with flair, Queen Elizabeth was known to punctuate her boldly colored ensembles with an equally eye-catching hat. And royal milliner Rachel Trevor-Morgan, based in St. James’s, London, was responsible for crafting each headpiece. But Elizabeth’s penchant for vibrantly ornate caps wasn’t solely rooted in her zest for haute couture — the hats were for the people. “She needs to stand out for people to say . . . they saw a bit of The Queen’s hat as she went past,” said the monarch’s daughter-in-law Sophie, Countess of Wessex, in the documentary “The Queen at 90.” However, according to her royal dresser, Elizabeth didn’t want Chatty Cathys in and around Buckingham Palace to know what color outfit or accessories she planned to wear to an important event; thus, she planted an array of “decoy” hats throughout her estate in order to keep key details of her forthcoming looks a mystery. 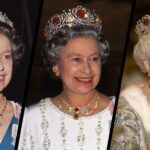 The Queen’s Trademark Hairstyle Demonstrated Steadfast Dedication To A Look

No quidding: Charles III to be featured on bank notes and coins

Hear what Louis Tomlinson Thinks of a One Direction Reunion