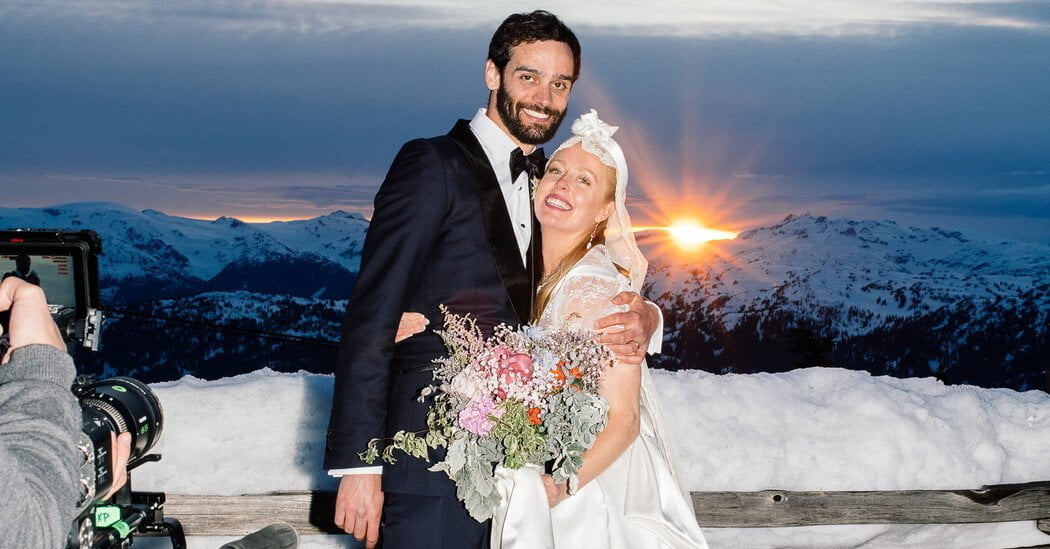 Reggie Clark and Jamie MoCrazy were immediately drawn to each other after meeting through a mutual friend in June 2017 at a Bar Named Sue near Salt Lake City, where he lived. They bonded over a shared love for the outdoors.

“We quickly made a lot of plans for trips,” Mr. Clark said, which, he noted, wasn’t unusual for him and his friends. The difference this time? “We followed through on just about all of them.” This included group excursions like camping, ski touring and mountain biking.

“We watched the solar eclipse on the top of the tallest mountain in Idaho,” said Ms. MoCrazy, who last November legally changed her surname from Crane-Mauzy to her longtime nickname.

But romance wasn’t on her mind at first. “I immediately put him in the friend zone,” she said.

As their friendship progressed, Ms. MoCrazy, a former professional freestyle skier in slopestyle and halfpipe, shared more about herself, including details of a traumatic brain injury she suffered as a result of a ski accident during a competition on April 11, 2015.

As fate would have it, April 11 also happens to be Mr. Clark’s birthday.

“It was incredible to hear what happened to her,” Mr. Clark, 30, said, “and I was in awe that the person I was having a normal conversation with had gone through everything involved with the T.B.I.”

Ms. MoCrazy, 29, had been competing in the World Tour Finals at the World Ski & Snowboard Festival in Whistler, Canada. She was in fourth place after her first run. “I had been ranked first or second over all in slopestyle and halfpipe skiing,” she said.

On her second run, she attempted an off-axis double flip. “I didn’t flip quite enough,” Ms. MoCrazy said. “On landing, I caught the edge of my ski, which whiplashed my head onto the snow, causing my brain to start bleeding in eight spots. I damaged my right brain stem, which paralyzed my right side.”

She was intubated on the mountain before being airlifted to Vancouver General Hospital, where she was hooked up to a lifesaving brain monitoring device, known as a brain bolt. She remained in a natural coma for 10 days, and was hospitalized for a month and a half. Afterward, she received outpatient therapy five days a week.

She had to relearn everything from swallowing to walking. She credits her family — especially her mother, Grace Mauzy — for her recovery.

Beyond the physical challenges, she has also dealt with emotional changes. “I would cry multiple times a day,” she said. “That was way harder than the physical stuff. People don’t recognize the cognitive challenges because they are invisible.”

Mr. Clark said it took him some time to understand that the occasional mood swings he had witnessed were largely attributed to her brain injury. “But I did understand that it’s very human to sometimes have emotional downturns,” he said.

About a year into their friendship, in April 2018, Ms. MoCrazy said her feelings for Mr. Clark were beginning to change, and she wondered whether he felt the same way, too. So she decided to test the waters while visiting Mr. Clark at his Salt Lake City home.

“He was eating breakfast,” she said, “and I point-blank asked him if he ever thought about kissing me. He responded with a kiss, mouth still full of Frosted Mini-Wheats.”

Their romantic relationship developed quickly. “We already liked each other so much that our friends actually had a bet on how long it would take us to start dating,” Ms. MoCrazy said. And before they officially moved out of the friend zone, she added, “My mom was sure we were in love after we returned from a camping trip with friends with starry eyes.”

Mr. Clark said Ms. MoCrazy’s “positive attitude, willingness to learn, adventurous spirit and genuine kindness are what lured me in and then made me fall in love with her.” He also called her “super goofy.”

Ms. MoCrazy, who grew up in Westport, Conn., works as a motivational speaker and the communications director for MoCrazy Strong, the nonprofit group she founded with her mother and her sister Jeanee Crane-Mauzy. The group provides peer-to-peer guidance to T.B.I. survivors and family caregivers. She graduated from Westminster College in Salt Lake City with a degree in communications.

Mr. Clark, who grew up in Glastonbury, Conn., is an operations supervisor, based in Salt Lake City, for the Curtiss-Wright Corporation, a company with headquarters in Davidson, N.C., that makes components for the defense, aerospace and energy industries. He has a bachelor’s degree in physics from Westminster College and a bachelor’s degree in mechanical engineering from Washington University in St. Louis.

The couple has learned to navigate Ms. MoCrazy’s cognitive challenges together.

To help calm her down, Ms. MoCrazy said that Mr. Clark would sometimes quote her back to herself, saying, “‘A great motivational speaker once said, ‘Look at the view,’” referencing a story from her recovery that she now invokes whenever they feel overwhelmed and need to slow down.

Ms. MoCrazy said she now only cries at what she calls “a regular level.” “I’m the most content I’ve ever been,” she said.

She has also found her way back to the slopes. “I had to completely relearn how to ski,” Ms. MoCrazy said. Several months after her accident she worked with an instructor at the National Ability Center in Park City, Utah. The center “allows individuals with cognitive and physical disabilities to enjoy the outdoors,” she said.

They have named April 11 their “Alive to Thrive Day,” always doing something to celebrate life — including, for many years, returning to Whistler. So it was fitting that the couple became engaged April 11, 2021, the sixth anniversary of Ms. MoCrazy’s ski accident and Mr. Clark’s 29th birthday.

After ascending the top of a mountain in Big Cottonwood Canyons, right outside of Salt Lake City, Mr. Clark proposed. “We had gone ski touring with a photographer to document the day and our ability to climb peaks together,” Ms. MoCrazy said.

The couple were legally married May 26 at her family’s home in Park City, with her mother and her two siblings, Jeanee Crane-Mauzy and Jillian Crane-Mauzy, in attendance. Jillian, her youngest sibling, officiated, having been designated to solemnize the marriage by the clerk of Salt Lake County.

They had another ceremony in Whistler, Canada, on May 28, atop the mountain that nearly took her life. In attendance were 80 vaccinated guests, including the groom’s parents, Gregory Clark and Laurinda Santos, as well as the bride’s mother, Ms. Mauzy, and father, Jeffrey Crane. The ceremony, also led by Jillian, took place just before sunset at Whistler Blackcomb resort.

“I have been dreaming of getting married on the mountain my whole life,” the bride said, adding that the physician who attended to her injuries after the skiing accident, Dr. Mypinder Sekhon, was seated in the front row.

“It was amazing looking at him,” she said, “and at the view.”

Where The bride’s family home in Park City, Utah. The couple had a second ceremony on May 28 atop Whistler Mountain.

A Gift From Beyond Ms. MoCrazy’s sister, Dr. Amy Crane, died from leukemia two months before the wedding. At the Whistler ceremony, the couple propped an enlarged photo of her in a blue dress, the color she had planned on wearing as a bridesmaid to the wedding, on a stand so she could be in the wedding photos. Before she died, Dr. Crane had said to her sister, “I’m sorry I won’t make it to your wedding,” but she did give the wedding couple a gift that day on the mountain, Ms. MoCrazy said: “A beautiful day that turned into snow.”

Made With Love Ms. MoCrazy’s mother, Grace Mauzy, made the bride’s wedding gown. “The dress has a four-foot train and includes separate top and bottom pieces,” Ms. MoCrazy said. “So when Reggie and I were doing our first dance, halfway through after a long dip, Reggie could unzip the skirt and I stepped out of it and began the second half which is a more ‘Dancing with the Stars’ routine with a partnered back flip and aerial.”

Through the Years The handmade lace veil that Ms. MoCrazy wore is more than a century old, having been first worn by her great-grandmother, Janet Nicolson Eaton Macomber. “My mom and aunt both wore the veil as well,” Ms. MoCrazy said.