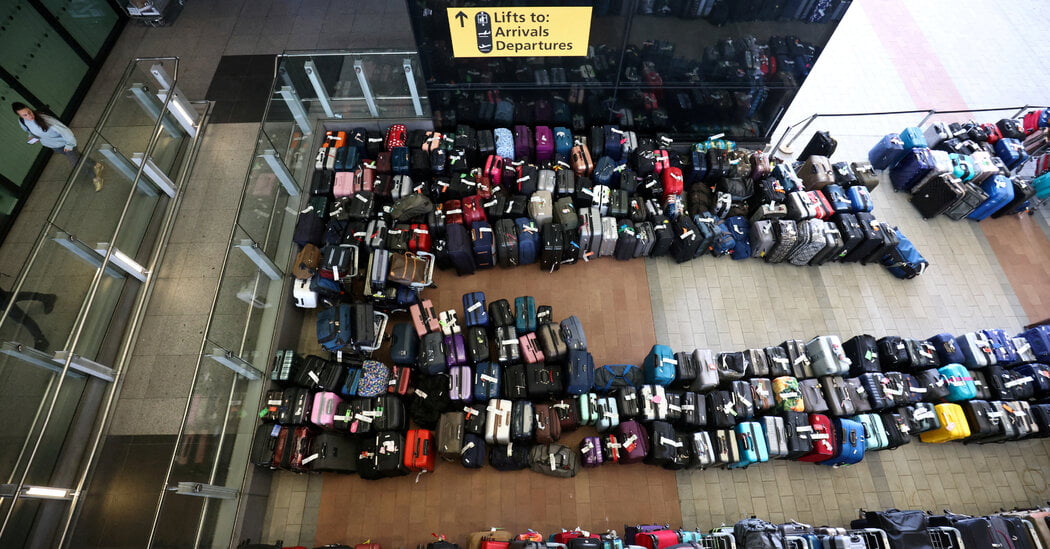 The Apple AirTag tracking device that Lily Datta had placed in her luggage before leaving Cleveland on June 27 showed the suitcase had arrived in Paris the following day. That perplexed Ms. Datta because she and her family had no plans to go to Paris. Their destination was Vienna, with stops in Washington, D.C. and Barcelona to get there, but not Paris. It was the family’s first foray abroad since the start of the pandemic, a trip to celebrate her son Dev’s high school graduation.

Ms. Datta filed a lost luggage claim at the airport, but when the suitcase was not delivered to their hotel in Vienna the next morning as promised, she began emailing the airline, sharing the bag’s location (according to the AirTag) daily. She received no response. Even more frustrating, she said, was that when she called the customer service number she had been given, she “just got a recording — no one ever picked up and there was no way to leave a message.”

Surging air travel demand and airport staffing shortages have made this a bedeviling summer when it comes to lost and delayed checked luggage. Incidents like the recent baggage system malfunction at London’s Heathrow Airport, which caused such big backups that flights were canceled to give workers a chance to sort out the mess, have only added to the misery.

While the number of mishandled bags had been decreasing over the past decade, partly because of new technology, the last few years have changed that trajectory. The number of delayed or lost bags rose to 6 out of 1,000 bags this February, from 5 out of 1,000 in February 2020, according to the most recent report from the Department of Transportation.

The system is now operating beyond its capacity, said William McGee, the senior fellow for aviation at the American Economic Liberties Project, a nonpartisan organization that promotes equal access to economic markets. “This is the worst summer meltdown for airline customer service in the 37 years I’ve spent working in, writing about and advocating about the airlines,” he said.

After a few days with no word from the airline, Ms. Datta and her husband, Alan Peyrat, began emailing various executives at United Airlines and Austrian Airlines, which had both handled the luggage. They also reached out via social media, and enlisted the help of their hotel concierge. Seven days after they arrived in Europe, Ms. Datta received an email response from Austrian Airlines. A representative wrote, with apologies, that her bag was one of many thousands that were missing and “the reality right now doesn’t allow me to give you any concrete information.”

The lost luggage problems have been exacerbated by a reduction in airline investment in baggage handling during the pandemic, said Danny Cox, the vice president of guest experience at Breeze Airways, a new airline that launched last year. “The airlines have been in survival mode,” he said, “There hasn’t been an overabundance of funds to improve baggage systems.” Current staffing deficiencies have a ripple effect, he added. “If you’re looking for a mechanic to fix something, you’re pulling from the same people who are servicing other ground operations.”

To better the odds that your luggage won’t get lost — and that you and your bag will be reunited if it does — follow these tips. Much of the trouble is beyond your control so a Zen mind-set of patience can help as well.

Identify your luggage. The most important thing you can do to help the airline reunite you with lost luggage is to label its exterior with your initials and phone number, and put more complete contact information like a business card inside. Take photos of the luggage and note the brand name and dimensions. Keep your baggage claim check and know your ticket and flight number.

To reduce mishandling, tuck in loose straps that can get tangled with machinery or another bag and veer off course. Remove any bar code stickers or checked luggage tags from previous trips.

Luggage that may seem lost might have been taken accidentally by someone with a similar bag, especially if it’s a black, wheeled carry-on, the most common bag, said Kevin Larson, the Alaska Airlines manager of central baggage services. The luggage also may just be on another carousel. Mr. Larson advises passengers to put something unique, like a colorful ribbon, on the outside of their bag. A bright luggage tag, stickers or reflective tape also can make a suitcase stand out.

Act immediately. If your luggage does not arrive when you do, notify the airline before you leave the airport. Getting in touch by phone has been challenging. The recorded notice on a phone call on June 30 to Delta Air Lines predicted a wait time of 80 minutes and offered no option to leave a number to receive a call back rather than stay on hold.

Pack smart. The Department of Transportation recommends passengers avoid packing items in their checked bags that are valuable, fragile, perishable or irreplaceable, and allows airlines to specify types of items they won’t cover if they are lost like cash, jewelry, computers, art objects, antiques and collectibles. Keep those with you or leave them at home. Put important medications in your carry-on.

Keep a virtual eye on it. Placing a small tracking device like a Tile or Apple AirTag inside your luggage lets you monitor the bag’s whereabouts via a phone app. “It’s about the same cost as checking one bag,” said Mr. Cox at Breeze Airways. Trackers are especially useful for discovering if someone mistakenly took your bag off the carousel instead of their own.

Some airlines, including United, American and Delta Air Lines, offer baggage tracking capabilities for passengers via the carrier’s website or mobile app.

Know the rules for compensation. The Department of Transportation lists the rules that airlines must follow when luggage is delayed or lost. The most that an airline can owe a passenger is $3,800 per bag. Flights with an international leg fall under different rules and the most a passenger will receive is about $1,800.

Each airline has its own policies within the government’s rules, so passengers need to check their carrier’s website for details. United Airlines passengers, for example, need to have receipts for lost items if they claim the contents of their luggage are worth more than $1,500. United will consider the bag “lost” after five days, but other airlines may specify a longer time before declaring a bag “lost.”

Restock while a bag is missing. When luggage goes missing, airlines will reimburse passengers for toiletries, clothing and other incidental items that they buy to tide them over while the company tries to locate their bag. Airline websites can be vague about what will be covered and the United States government does not allow the airlines to impose a daily spending limit, so travelers may feel unsure about what’s allowed. Travelers should fill out a claim form available at the airline’s customer service desk or website and submit receipts for the items they buy. They should also have an explanation for anything unusual as to why the purchase was necessary.

Use protection. Premium credit cards may offer lost luggage coverage, but can make passengers jump through some hoops to get it. More than 25 types of Chase credit cards offer up to $3,000 in compensation for lost luggage to make up the difference between the reimbursement from the airline and the value of the luggage and items in their luggage, according to Pablo Rodriguez, a spokesman for J.P. Morgan Chase. Customers must furnish copies of receipts for each item valued at $25 or more that they are asking to replace, and the payout they receive could be lowered depending on the age of the items.

Travel insurance purchased separately can include compensation for lost or delayed luggage, but as always with travel insurance, read the fine print.

Don’t check the bag. The most obvious advice, but still the best way to make sure your bags aren’t lost by the airlines, is to travel with carry-on only. Pack ruthlessly — what do you really need? What can you buy at the destination? Can you wash out your socks in the sink? If you do check your luggage, try to book a nonstop flight. A transfer is one more chance for something to go wrong.

What We Know About the Protests in Sri Lanka