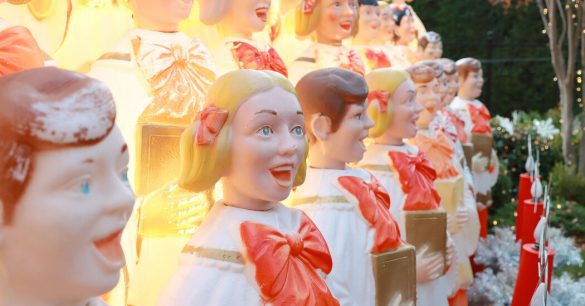 Move over blow-up snowmen. This year, hollow plastic light-up figures are making a comeback and giving those inflatable fabric ornaments — the type with the fan inside — a run for their money.

The vintage-looking plastic lawn ornaments called blow molds are made by inflating melted plastic inside a die, in much the same way water bottles are created, then trimmed and painted. Shaped like reindeer, toy soldiers, Santa Claus, gingerbread men and even Arctic locomotives, the decorations have been around since at least the 1950s, having arrived around the same time as the plastic pink flamingo.

Although two of the leading manufacturers of classic blow molds, General Foam Plastics and Union Products, went out of business in 2018 and 2006, respectively, other companies such as Cado, which acquired Union’s molds, the Twillery Co. and Mr. Christmas are turning out new models and reproductions of old ones. Shoppers now can find blow-mold Nativity sets and giant holiday candles at Wayfair, Rudolphs and Grinches on Amazon, sincere snowmen at Home Depot, ornamental Olafs of “Frozen” fame at Walmart and saddle-wearing reindeer at Target.

“Guests are responding even more to blow mold decorations than in past years,” said Sarah A. White, a spokesperson for Target.

For collectors, though, original vintage models are still the most exciting to find. Those in good condition can sell for top dollar.

“Vintage holiday blow molds have skyrocketed in demand and price over the last four years,” said Megan Morrison, a Homer Glen, Ill.-based antique dealer specializing in holiday décor. A 36-inch light-up “Giant Santa Face,” manufactured by Empire in the early ’70s, which she recently featured on her Moxie Vintage Instagram account, for instance, would have cost $65 in 2018. “The asking price this year is more in the $300 to $400 range,” she said.

Such inflation has led some collectors to mix both old and new.

“It was getting hard to find decently priced vintage stuff,” said Karen Ellis, a San Diego collector of Christmas kitsch. “But Target, Big Lots, Michaels and a bunch of other places are all selling really good reproductions.” Nostalgic Christmas decorations are always collectible, she said, “but blow molds are especially having a moment.” Ms. Ellis added three new ones and a vintage model to her collection of light-up plastic this year.

Social media, Ms. Morrison explained, has fueled this retro trend, the same way it did a revival of light-up ceramic Christmas trees a few years back. “There is a large and very active group of people on Instagram who share photos of their vintage Christmas collections, which often include blow molds. This inspires others to look for similar items to add to their own décor.”

If blow mold collectors have a king — at least in Los Angeles — it is the producer Glenn Geller.

The former president of CBS Entertainment, Mr. Geller has amassed an overabundance of these decorations, including 120 light-up toy soldiers, each almost three feet tall. In all, he has collected more than 500 blow mold figures for both Halloween and Christmas.

For each of those holidays, Mr. Geller decorates his residence — a Tudor Revival home in the Toluca Lake neighborhood of Los Angeles that was built in 1927 — with his collection of plastic figures. There are so many on his lawn that neighbors refer to the place as “the blow mold house.” It’s known as Lilley Hall, after the composer Joseph J. Lilley, who did the vocal arrangements for the 1942 Christmas movie “Holiday Inn,” and lived there from 1954 to 1971.

Mr. Geller began collecting blow molds, often via eBay, in earnest about seven years ago, a span in which he described as “not nearly as long as it should take for someone to own 500 blow molds.” He began by buying light-up plastic pumpkins to bewitch trick-or-treaters on his block, which can number in the thousands every Halloween. Christmas, though, has always been his true holiday love. He started that collection with light-up choir members, each 40 inches tall. “I bought 10 and then it became 20 and then it became a lot,” Mr. Geller said. “I ended up with 52 of them.”

His passion for this type of decoration began in the ’70s when blow molds were at the height of their popularity. “When I was a kid growing up in northwest Indiana, my dad and mom would take my sisters and me and drive around on New Year’s Eve and look at Christmas lights. On one lawn, there was a Santa Claus with nine reindeer, and it looked like they were flying. It was the most magical thing. I remember thinking, When I’m old enough to have a house, I want a Santa and nine flying reindeer.”

He has far surpassed that goal. Each year, Mr. Geller’s home is adorned with his extensive blow mold collection and more than 100,000 lights. They’re mostly LED bulbs, he noted, so the whole season bumps his electric bill by only $600. The display has made his home, if not a tourist attraction, a seasonal draw for locals who marvel at the multitude of figures. “The more you have of them, the more magic,” Mr. Geller said.

Although such blow mold figures were intended for outdoor display, some collectors have welcomed at least the smaller ones inside their holiday homes in recent years. “For lack of a fireplace in my New York City apartment, I place as many as will fit in my window wells,” said Chuck Hettinger, an East Village-based artist and decorative painter who has dozens of blow mold Santas. “They come in all shapes and sizes and any color, as long as it’s red. The glow is beautiful and, as a midcentury child, they can bring a tear to my eye.”

And as for those inflatable fabric decorations that have become so popular in the last decade or so? Those who prefer blow molds aren’t fans. “I just don’t like them,” Ms. Morrison said.

“Everyone should just take them out of their yards,” Mr. Geller said. “I hate them.”

Mr. Hettinger agreed. He remembered spending a recent Christmas in Ocean County, N.J., with friends whose neighbor’s home happened to be decorated with a lawn full of inflatables. No matter how expansive the collection or well-intentioned, the display didn’t hold the same allure that a blow-mold front-lawn extravaganza like Mr. Geller’s would.

“Honestly,” Mr. Hettinger said, “it was a like a bad drug trip.” 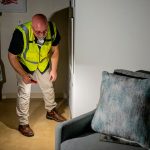 After the Storm, the Mold: Warming Is Worsening Another Costly Disaster 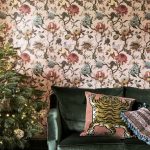