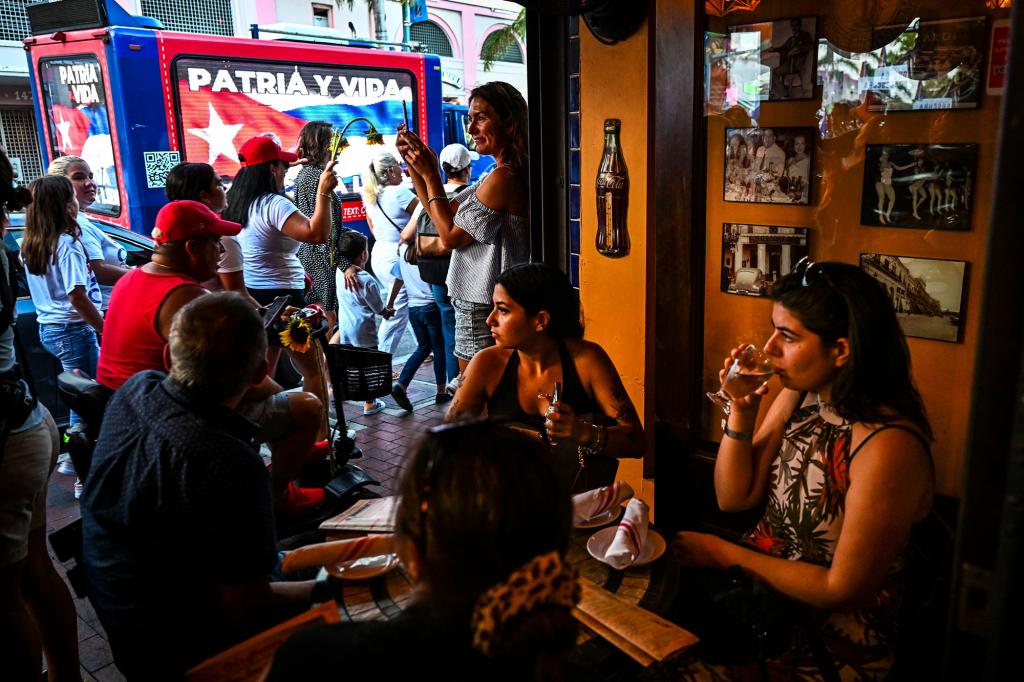 Establishments in deep-blue cities that faced both excessive COVID-19 restrictions plus violent protests in 2020 are starved for diners, according to global data.

The same source shows that Sun Belt boomtowns in Florida, Texas and Arizona are busier than ever and enjoying a massive surge in restaurant business this year.

The divide between the two is startling.

The number of daily diners in the city of Minneapolis was down an average of 54.3% in July — so the city had less than half the number of people eating out, compared with July 2019, according to OpenTable.

It’s the worst recovery of any city in the world tracked by the restaurant reservation service.

The state of Florida, meanwhile, has four of the top six surging cities in America, with the average number of people dining out in Miami, Fort Lauderdale, Naples and Tampa up nearly 30% from July 2019 to July 2022.

The mandates included two statewide periods of extended take-out-only options for restaurants in the spring of 2020 and again in the winter of 2020-21.

The city also enacted a vaccine mandate for restaurants in January 2022 that it lifted in February after facing a lawsuit from local businesses; it nearly voted to defund its police last year; and it’s in the midst of a massive crime surge.

By contrast, many cities around the nation are thriving, especially in Florida, which is blowing well past the number of people who ate out in 2019.

Las Vegas topped the list in July, with the daily number of diners up an average of 35.7% compared with July 2019.

“The data set is based on a sample of approximately 20,000 restaurants that provide OpenTable with information on all of their inventory in states or metros with 50+ restaurants on the OpenTable network,” the reservation services told Fox News Digital.

“We’re off to the races in Florida,” said saloon owner Urban.

His own experiences mirror the data shown by OpenTable.

Business at his two Sunshine State hotspots is up about 30% over the pre-pandemic year of 2019, while down “in excess of” 50% in Minneapolis.

He opened Austin in 2021, so has no pre-pandemic data with which to compare.

Florida, he said, “is totally the place to be. The whole country flocked to Florida, and to a lesser extent to Texas to escape the lockdowns.”

“Even the Democrat politicians went to Florida,” he added.

Rep. Alexandria Ocasio-Cortez, D-NY, was photographed partying maskless in Miami in January 2022 while advocating lockdown policies and mask and jab mandates in her home state — and elsewhere around the country.

Also, 50,000 fewer people are employed in NYC restaurants today than they were at the start of the pandemic, Andrew Rigie of the New York City Hospitality Alliance told Fox News Digital.

“There were certainly some [COVID] policies that made sense and others that didn’t make sense or went on way too long,” said Rigie.

“There was a lot of frustration with constantly changing city, state and federal regulations. It was an impossible situation,” he said.

Not in the Sunshine State.

“Florida quickly returned to normal and avoided the draconian lockdowns you saw in other parts of the country,” Florida Restaurant and Lodging Association spokesman Geoff Luebkemann told Fox News Digital.

“The public policies that Gov. [Ron] DeSantis enacted and in some cases led on attracted a lot of people and a lot of business here. It created buoyancy in the market, a sense that you could love your life normally in Florida.”

The state’s dining scene has been boosted not only by the influx of new residents and new businesses relocating to the Sunshine State, but by an increased desire of local residents to enjoy the state’s thriving dining scene.

Celebrated New York City eateries such as Carbone and ZZ Sushi Bar from the Major Food Group opened Florida locations for each brand in 2021 during the height of pandemic restrictions elsewhere.

Chicago casual-eats outpost Portillo’s Hot Dogs are among many others that made the move as well.

The average Seattle restaurant to survive the pandemic “is, on average, $160,000 in debt, equal to three years of profit,” reported the Washington Hospitality Alliance.

The numbers are even in worse in Minnesota.

“About two-thirds of restaurants took on debt during COVID and the average amount was $500,000,” Hospitality Minnesota spokesman Ben Wogsland told Fox News Digital.

He said he’s “not surprised” by the slow recovery in Minneapolis.

Business travelers have still not returned to the city, he noted, while concerns over public safety linger.

The Biden administration offered a $26.8 billon Restaurant Revitalization Fund in 2021. But 72 percent of applicants got $0 from the program — while the biggest dollars often went to the most high-profile chefs and businesses, according to the Small Business Administration.

Maria Morillo, an immigrant entrepreneur who operates a pizza shop in a Manhattan housing project, received just $1,816.38 from the fund, the lowest amount of any eatery in the borough among the few that received funds.

“I’m disappointed,” Morillo told The Post at the time.

“We’re trying to run a small business here. But they’re not concerned about us at all.”

North West and Siblings Join Kanye West at Balenciaga Fashion...
40 mins ago
Indonesian cops broke FIFA rules against tear gas, set off...
43 mins ago
George and Amal Clooney on Importance of the Albie Awards...
1 hour ago