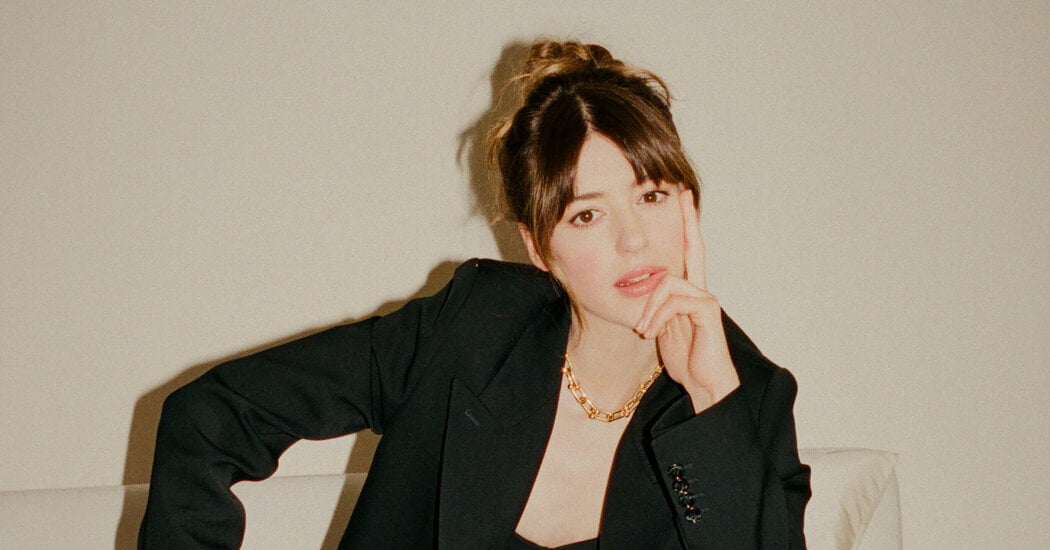 Daisy Edgar-Jones bravely walked onstage, her face a ghastly white. Under her arm, a human head.

“How could you do this to me!” she bellowed at Henry VIII.

As the ghost of Anne Boleyn, Edgar-Jones, the hitherto quiet child, now slathered in face paint and clutching a homemade severed body part, found herself suddenly enamored with the spotlight.

“That was the first time I remember being aware of the joy of departing from yourself,” Edgar-Jones said.

She recounted this pivotal school-play memory on a breezy June afternoon, perched on a cream-colored couch in a cream-colored luxury hotel suite in West Hollywood. The cream-colored dress she’d been wearing for a series of engagements earlier that day had begun to unravel, prompting a change into an oversize black blazer, T-shirt, shorts and chunky G.H. Bass loafers, all of which now stood in cool contrast to the generic palette around her.

During her audition for the part via video, in 2020, Edgar-Jones brought the director Olivia Newman to tears and hooked one of the producers, Reese Witherspoon.

“From her first screen test, she felt every moment of abandonment and loneliness that was written on the page,” Witherspoon wrote in an email. “Her work is so honest, it breaks my heart every time I watch it.”

The film, shot in Louisiana, required Edgar-Jones to take boating and drawing lessons, and work with a dialect coach to hone a Carolina drawl. Her own accent is a soft-spoken mash-up of vernaculars, thanks to her Northern Irish mother and Scottish father.

She was raised in the north London suburb of Muswell Hill, the only child of Wendy, a film and TV editor, and Philip, the head of entertainment at Sky, the British TV broadcaster. A few years after her Boleyn awakening, Edgar-Jones auditioned at age 15 for the National Youth Theater with a monologue from “Romeo and Juliet” — a loving tribute to Claire Danes’s performance in the Baz Luhrmann iteration.

A perk of the prestigious program, which counts Helen Mirren and Daniel Day-Lewis among its alumni, was the members-only open casting calls, including one for Sofia Coppola’s planned adaptation of “The Little Mermaid.” While the project fizzled before Edgar-Jones got very far, the casting director introduced her to the talent agent Christopher Farrar, thus giving her representation and the confidence to continue. She considered college but ultimately turned down several universities, instead taking odd jobs as a barista and a waiter while she soldiered on with auditions.

“I had some income and some semblance of hope,” she said. “It was, at first, a gap year, and then it became a gap life.”

After a string of smaller roles in British productions, her big break came playing Marianne opposite Paul Mescal’s Connell in “Normal People.” When the series premiered in April 2020, it was the early days of the pandemic, and the Sally Rooney adaptation provided an intimate escape for viewers muddling their way through a shutdown world. Mescal’s chain necklace and Edgar-Jones’s bangs — an impulsive salon decision after a string of failed auditions — became overnight sensations.

“I watched Daisy in ‘Normal People’ and was blown away by the subtlety of her performance and the impact of her choices,” Witherspoon wrote, praising “the most utterly honest performance that made me lean in and say, ‘Who is that?’”

But as enthralled as viewers were with the actors playing the show’s laconic lovers, the fanfare was kept at a literal distance from Edgar-Jones, locked down in London.

“I was being told that things were significant or changing, but I was just in my bedroom,” she said. “I was having this odd experience of being on Zoom the whole time having interviews, and then I’d go on my once-daily walk and someone would stare at me, but I didn’t know if it was just because they hadn’t seen another human being or if they had seen me in a show. It was really strange.”

She garnered Critics Choice and Golden Globe nominations while spending the next year and a half isolated on sets in Calgary, Vancouver and New Orleans. Then, this past spring, she went through what she terms a “baptism of fire,” bouncing from her first red-carpet premiere (for “Fresh”) to her first Vanity Fair Oscar party and her first Met Gala in quick succession.

“You know how a swan, when they’re on the river, they’re floating along really gracefully but underneath their legs are ——” she mimicked paddling furiously. Her crescendo on the Met steps wearing Oscar de la Renta “was like that,” she said. “Perhaps I looked calm, but I was terrified.”

Her de facto societal debut coincided with the release of “Under the Banner of Heaven,” a true-crime drama series in which she played Brenda Lafferty, a Mormon woman who, along with her 15-month-old baby, was brutally murdered by religious extremists in 1984.

In flashbacks, we see Brenda perform “The Rose,” pursue a broadcast journalism career and embolden other Mormon wives. But despite the heinous crimes at the show’s center, we never see Brenda’s actual killing or her lifeless visage onscreen. Compare that with, say, “The Staircase,” which took every opportunity to show Toni Collette meeting a graphic end.

“That was something I felt was really important,” Edgar-Jones said of the omission. “Why would you want to capture the worst thing that could happen to somebody? Instead, you let their life be what’s defining.”

She took the responsibility of playing a real person “incredibly seriously,” her co-star Andrew Garfield said, noting a certain “brilliance and joy” that he sees emanating from Edgar-Jones, onscreen and off.

“There’s something unnameable that certain people have,” he said. “And, yeah, it’s talent. But it’s also a charisma and the kind of instant identification that you feel as an audience member where you go, Oh, I know this person, and I love this person. Even without them saying anything, you can feel their soul moving in a certain way and you want to follow whatever journey they’re on.”

The two actors became fast friends while shooting in Canada. Off the clock, Edgar-Jones took a particular liking to electric bike and scooter rentals. “She would ride those scooters into the bitter winter months in Calgary until her hair started to freeze,” Garfield said. “She’s all about fun.”

That includes routinely importing her own DJ equipment to spin house and disco tracks for her co-stars after work. Edgar-Jones is blissfully passionate about music in general: She often makes playlists for her characters (Kya’s involved a lot of Bat for Lashes and Blood Orange’s “Coastal Grooves” album) and plays guitar. She’s also developed a bond with the singer Phoebe Bridgers, who is in a relationship with Mescal of “Normal People.”

Despite having, as Bridgers put it, “every opportunity to have the world’s craziest ego,” Edgar-Jones exudes wide-eyed enthusiasm. She is exceedingly polite — and perhaps a gentle liar — cheerfully telling the waiter who brought her a Pepsi instead of her requested Coke during our talk, “That’s fine. They taste the same.” And although she describes herself as shy, those who know her say she can also be uproariously off-color.

In the past, her fair skin and brunette bangs have led some to describe her as the love child of Anne Hathaway and Dakota Johnson. More recently, “Stranger Things” fans have delighted in her perceived resemblance to Eddie Munson, the beloved Season 4 character played by Joseph Quinn. “I do see it,” she said, adding that she and Quinn once met by chance at a “Soul Train”-themed club night in London. “I think I now know what I’m wearing for Halloween.”

But career-wise, she hopes to emulate Jamie Lee Curtis, Tilda Swinton or Frances McDormand: women who have forged careers in Hollywood built on longevity and who found some of their greatest successes once they’d shed any trace of the ingénue.

“These women are able to really transform,” she said, “and also play characters that are funny and complicated and, at times, the unconventional idea of what a lead female should be.”

Sebastian Stan, who co-starred with Edgar-Jones in the twisty comedy-thriller “Fresh,” sees echoes of another screen legend in her work.

“I give Daisy a hell of a lot more credit than I’d give myself at 24. There’s an awareness to her that, I think at that age, is hard to find,” he said and compared her to a young Meryl Streep. “I’d like to think that as she gets older, her performances are only going to get more and more rich.”

Edgar-Jones has a plan to make that happen. Her bucket list includes working with Wes Anderson, Barry Jenkins, the Coen brothers, the Daniels and Greta Gerwig. And she hopes to stretch herself into the unexpected, perhaps by playing “someone really evil,” doing more comedy or directing.