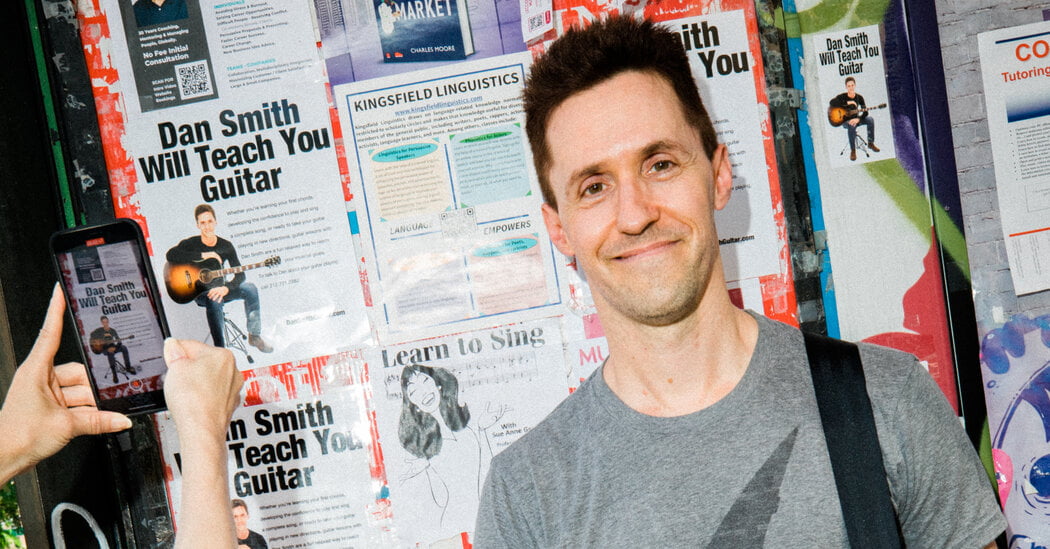 For three decades, Dan Smith has been making a solemn promise to New Yorkers. He has posted his flier — “Dan Smith Will Teach You Guitar” — thousands of times in the city’s bodegas, coffee shops, pizza parlors, delis and laundromats. Parodied by Jon Stewart and the guitar god John Mayer, Mr. Smith has reached local legend status alongside the likes of Cellino & Barnes, Dr. Zizmor and Keano.

There have been at least 60 versions of the sign, and most have included a photo of a seemingly ageless, sinewy and smiley Mr. Smith posing with his instrument. But spotting one in the urban wild may soon become a rarity, because New York’s go-to guitar teacher is doing less of his vintage style of promotion and embracing a more 2022 approach.

Three months ago, Mr. Smith, 51, started a YouTube channel, where he has posted short instructional videos to help aspiring guitarists navigate “Should I Stay or Should I Go” (by the Clash), “I’ll Be Your Man” (the Black Keys) and more songs. Others have had success as YouTube guitar instructors: “Marty Music” has 3.3 million followers, and “Andy Guitar” has 2.2 million. Mr. Smith, a newcomer to the world of online tutorials, had 144 followers as of this week.

While reporting this story, I took my old guitar from its case, where a family of cockroaches had taken up residence a few months before, and tried to play along with a couple of his videos, only to get frustrated. I quickly gave up, as I had many times before when trying to learn instruments.

My can’t-do attitude makes me exactly the kind of person Dan Smith does not want to teach. In fact, when I asked him if he would give me lessons, he said no. In other words, Dan Smith will not teach me guitar. At one point, he even threatened to cancel an interview.

After we had re-established the traditional journalist-subject relationship, I asked him why he had soured on me. “You didn’t really want to learn how to play guitar,” he said.

“I understand why I’m perceived as just an amazing promoter,” he said. “Of course, that’s how people perceive me, because, in many ways, that’s all they’ve known of me so far.”

Mr. Smith, who lives in Manhattan with his wife, Melissa, a photographer, charges $150 for a one-hour private session. He also offers group workshops and lessons in songwriting and solo performance. He said he has supported himself by teaching guitar since the mid-1990s.

He started giving lessons at age 16 in his hometown, Newton, Mass. A few years later, after doing some experimental theater, busking outside Le Centre Pompidou in Paris and putting in some time at New York University, he decided to pursue a career in music and theater. He started teaching again to make money, and it soon became a calling.

“I’m trying to help people connect to themselves,” he said.

He has stipulations about whom he’ll teach and how, pedagogical rules he said he had come up with after thousands of lessons.

Students must see him at least one hour a week, as a sign of their commitment. And they should not go to him with the idea that his lessons are all about learning to pick and strum or play solos like a guitar hero.

“Music is a lot more than just putting your fingers on the strings,” he said. “It’s telling a story, it’s creating a mood, it’s evoking an emotion.”

He does not take on students under 21. “Everybody pays as they go,” he said, “because I want everybody to think about it every time they have a guitar lesson: ‘I’m paying for this. What am I bringing to the table?’ The person who’s doing it needs to pay for it, because that’s what makes it real for them.”

There are yet more stipulations: Mr. Smith does not offer gift certificates; he does not teach people who have signed up for lessons at someone else’s behest, like singers or actors whose managers want them to learn guitar; and he does not take notes for his students or permit them to take notes.

“It doesn’t work,” he said. “I’ve tested everything that I know for a fact. That’s another thing that separates me from other teachers: I’ve done the research.”

For those who meet the criteria, the experience can be transformative.

“It’s not just about learning an instrument but expanding my feelings about myself, about what I’m about,” said David A. Paterson, the former governor of New York, who has been studying with Mr. Smith since 2020.

Mr. Paterson, who takes a two-hour lesson each week, said that he and Mr. Smith frequently spend half a session just talking. “I think that’s his meditation technique,” he said. “That’s how he gets you in the mood to play.”

Mr. Paterson, who is legally blind, added that he appreciated his teacher’s patience and an approach that goes beyond technique. “He’s a psychologist,” he said. “I’ve always been someone who thinks that, to make up the difference, that I have to hurry.”

“When you do a song,” Mr. Paterson continued, “it’s almost like you’re shoveling snow: You just drive through. You have a lot of energy and you work hard, but it’s not an intellectual pursuit; it’s getting the feel of things. The great musicians call it ‘Make room for Jesus.’ In other words, you play — and then you just stop. That little space is as much a part as the music. I’m still struggling with just stopping.”

Mr. Smith said that the time spent in conversation serves a purpose: “If a student arrives and they are tense or distracted — everybody needs time to, in my opinion, clear the runway for themselves before they can really make music.”

In 2020, six months into his studies with Mr. Smith, Mr. Paterson and his teacher took the stage of Bar Nine in Manhattan, where they performed “Stand By Me” by Ben E. King and “I Heard It Through the Grapevine” by Marvin Gaye.

Mr. Smith sometimes plays solo at Paddy Reilly’s Music Bar and other Manhattan clubs. His original songs include the city-centric “Sixth Avenue” and “New York Forever.” During our time together, he mentioned that he was about to perform in front of a large audience at an outdoor show in Battery Park. In the days leading up to the gig, he texted me to make sure I would be there. Mr. Smith’s wife echoed the gravity of the moment, telling me how excited they were for the occasion.

It was billed as “a talent show” featuring the city’s “most notable and iconic characters.” The lineup was put together by Nicholas Heller, a filmmaker and social media personality known as New York Nico. It was timed to the Tribeca Film Festival premiere of Mr. Heller’s documentary film short, “Out of Order.”

“There’s a BuzzFeed list of people who are super-famous in New York, and Dan Smith is on it,” Mr. Heller said. “To me, he’s more important than a worldwide celebrity.”

With his trusty Gibson Hummingbird guitar, Mr. Smith took the stage at dusk. He looked serious, earnest. It was clear that, unlike some others on the bill, he did not view his performance as a stunt, but as a chance to show New York what he is made of.

He started playing “New York Forever,” which he had written in the early part of the pandemic as a tribute to the city’s resilience. In the middle of the song, another New York character appeared onstage, on stilts. It was the one-name street performer Bobby, who regularly walks the city towering over crowds.

As Bobby loomed over the stage, Mr. Smith seemed unfazed. He has, after all, had decades of practice in teaching others about what it means to take your time and seize the moment. And when his song was over, the crowd cheered not for the man from the flier but for the performer who was trying to realize a New York dream like the rest of us.