Home » Dressing for the Age of Anxiety
Life

Dressing for the Age of Anxiety 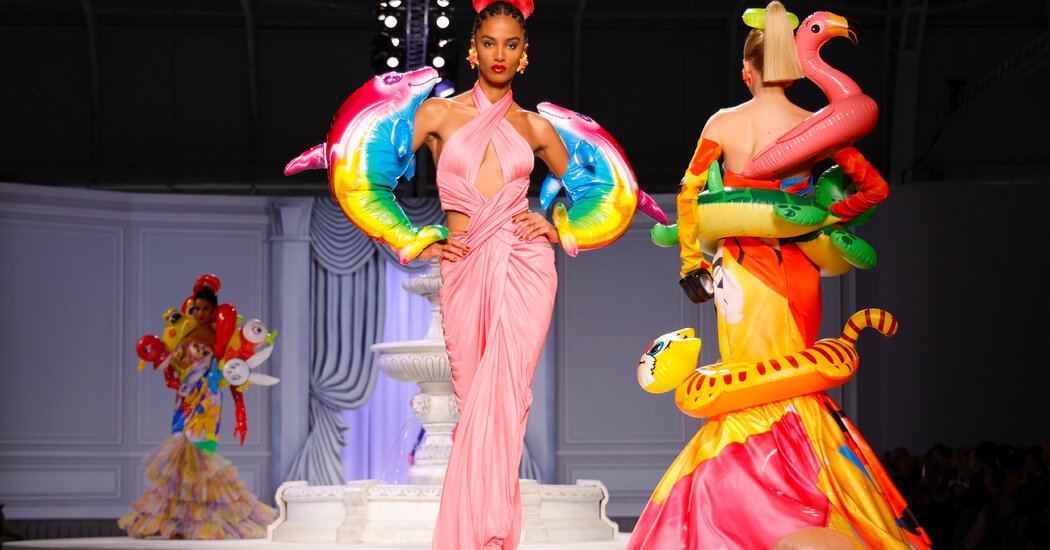 MILAN — What is it with inflation? Of all the crises currently roiling the globe that might capture the minds of designers, this is the pain point that is turning into a trend? Apparently so, judging from the opening days of the Milan shows.

First, Glenn Martens of Diesel set his show around a quartet of gigantic inflatable dolls and then Jeremy Scott of Moschino turned the whole thing into a pun in 63 looks.

“Globally, everyone’s been talking about inflation — in housing, food, gas — so I brought inflation to the runway,” Mr. Scott said backstage. Perhaps it’s understandable. Rising prices could, after all, change consumption patterns. And that could hit fashion where it hurts. Mr. Scott was just reframing the issue.

Specifically, he transformed life preservers into trompe l’oeil peplums on little technicolor skirt suits; used them to pad out lapels to form a puffy bright-red heart around the neck or otherwise decorate 1980s little black dresses and power-lunch suits; swapped them in like feather boas to swathe the shoulders; and otherwise employed plastic flotation devices (often in the shape of duckies, bunnies, turtles and other childhood cartoon friends) to buoy, literally, the mood.

“You have to save space for joy,” he said. Joy that was “unabashed, but” — he qualified — “not unaware.”

And not unprecedented — Franco Moschino himself riffed on the life-vest-as-jacket in a long-ago collection — and undeniably clever. Mr. Scott is a dab hand with a visual joke. It was hard not to let loose a giggle or two when faced with a white goddess gown, like something from an Erté Art Deco sketch, with two enormous swan floaties curving up behind. Or smile at an iridescent blue tulle ball gown with water wing dolphins padding the hips like panniers.

But it’s also true that Mr. Scott has a tendency to become enchanted with his own wit, and that this particular piece of frockplay veered awfully close to the line of let-them-eat-cake (another idea Mr. Scott has bent to his own ends). For many, inflation and its implications for the cost of living are no laughing matter.

There is value in bringing levity to the moment, and in defanging fear by making it funny — in offering a life raft of sorts. But whether it’s a good look to sell it in the form of a wearable one-liner is less clear.

Still, there’s a sink-or-swim vibe running through the collections. At MaxMara, Ian Griffiths also went down to the seaside, with an array of wide-leg sailor pants, midriff-baring cropped tops and easy-tailored jackets in rough linen, sun-bleached pastels and the whiff of the old Riviera. At Emporio Armani, Giorgio Armani juxtaposed his aquatic silks and beaded dresses against the backdrop of an endlessly running stream.

It’s one way to self-soothe with dress in the age of anxiety; at Prada, Miuccia Prada and Raf Simons offered another. Enlisting Nicolas Winding Refn, director of the 2011 action film “Drive,” as a sort of cineaste collaborator to create not a joke, but a mood.

Thus, Mr. Refn built a nameless house in a nameless place that became their set, covered in black craft paper with holes ripped out for doorways and windows through which glimpses of different scenes in different rooms could be seen. A foot here, an empty chair there — lives lived just out of reach.

Then they sent out a Prada wardrobe with the flaws built in, like the clothes already had been beaten down by experience and come out the other side.

First, there was an institutional gray onesie that combined leggings and a button-up shirt. Onto this were layered boxy jackets and coats in lighter gray. Later came two-tone shifts in colors like oily black and lipstick-orange red, the tints not quite reaching the unfinished edges, creases silk-screened on. Also chunky knit sweaters and skirts slit to mid-thigh, layered over ragged white silk slips and snagged in different places, looking like the fabric had been caught on the edge of a desk as the wearer rushed by; apron minidresses pre-scrunched into folds at the hips and waist; and beautiful papery silks printed with giant flowers and then torn upward at the hem (like the paper walls), to reveal the black slip beneath.

In their imperfections lay their power. Like Mr. Scott’s life preservers, they suggest survival, albeit in a more narratively abstract and emotionally layered way.

At the end, a series of black dresses and coats came, each with a bow stuck on randomly at the back like a migrating form of decoration, tails streaming out behind to suggest a train, or a windsock. Just in case you need to test which way the zeitgeist is blowing.

Dear Abby: My husband is choosing marijuana over our marriage