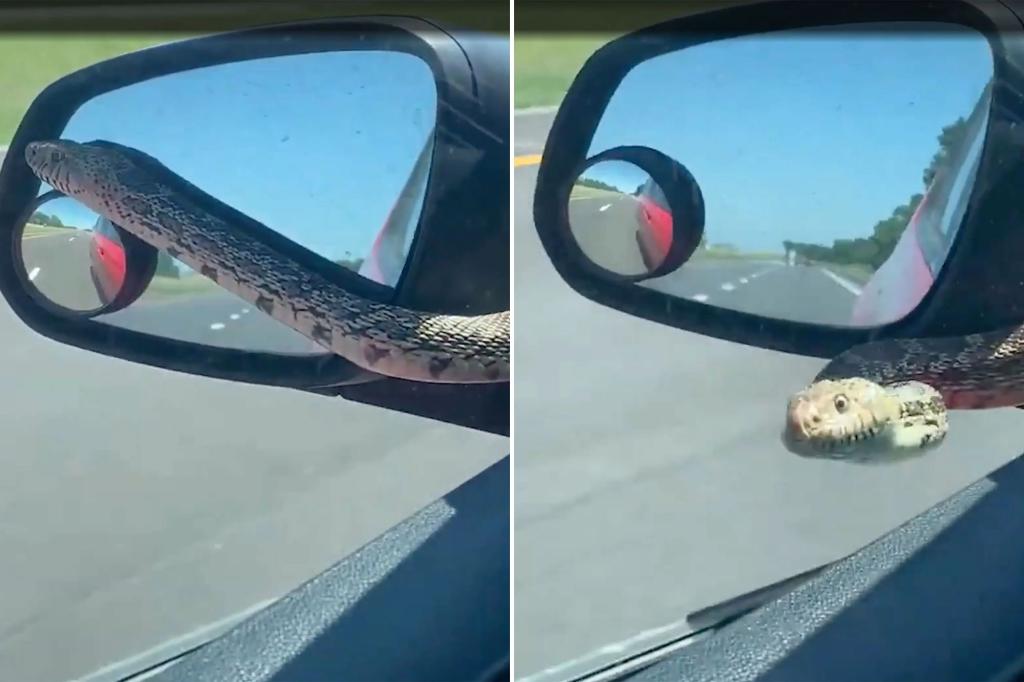 Driving 70 mph down a Kansas highway, Vicki Ruhl found a snake staring at her through the windshield.

“It is my worst nightmare come true,” Ruhl told Tulsa’s FOX 23. “In that moment, it is so surreal.”

For an hour, Ruhl drove as the serpent wound itself around her rearview mirror, slithered across the windshield and into and out of the engine compartment. Not only unnerved by the curious snake, she also videoed the ordeal making driving a challenge. She said she just focused on not crashing and actually missed her exit because she was so distracted.

“Sheer panic, just frightened, just terrified,” Ruhl said. “In some of the videos you can hear those rumble grids where I’m trying to keep the car on the road.”

She was afraid to pull off the road and park on the narrow shoulder to shoo the critter off her car, “It was almost 100 degrees out. Where am I going to go? And I’m probably going to get hit.”

Ruhl suspects the snake climbed aboard while she was parked at her friend’s farm.

“It was probably just looking for food,” said Bob Cross of Critter Capture Services. “Snakes just crawl and look for food. That’s pretty much their life. But there’s nothing in a car or on a hood or in an engine — there is no rhyme or reason for it. Maybe it didn’t want to pay Uber.”

Cross identified the hitchhiker as a young, non-venomous bull snake. He has only gotten one call to remove a snake from a car.

“I got a boa constrictor, about three-foot long out from an engine of a car… a lot of years ago,” he said. “He worked his way up on top of the engine. The fan blade of the engine was hitting the snake, making a clicking noise. The driver stops, gets out, raises the hood to find out what’s clicking, and here’s this snake on top of the engine.”

Ruhl did call 911, but the dispatcher told her to call a reptile rescue group.

Once she got off the highway and parked, the snake wasted no time getting off the car and quickly slithered away into the grass.

I’m proud of my sexy makeover — even if haters say I...