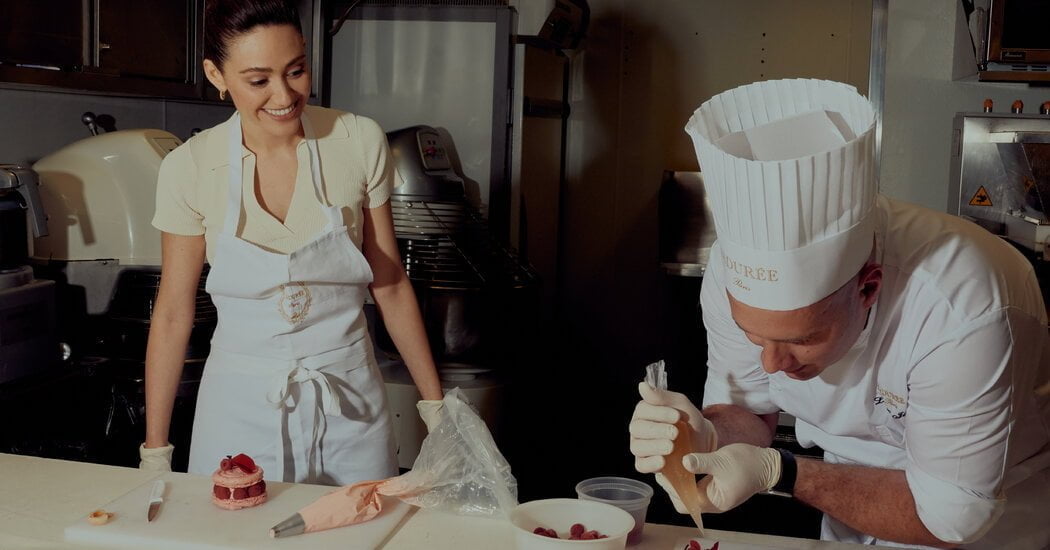 “Look,” Emmy Rossum said, squeezing an excess of rose buttercream onto a waiting meringue. “We can’t all be perfect the first time.”

Ms. Rossum, 35, a star and executive producer of “Angelyne,” the limited series about the mysterious blonde bombshell featured on Los Angeles billboards in the 1980s, had come to Ladurée, the restaurant and patisserie in the SoHo section of Manhattan, on a stormy Monday afternoon.

Diagnosed with celiac disease as a child, she has long been a fan of Ladurée’s specialty: the macaron, a wheat-free confection of almond and egg white. When she met with the real Angelyne for the first time, in the fall of 2018, she brought, as tribute, a box of Ladurée macarons in hot pink, Angelyne’s signature color. (The tribute worked: That first meeting lasted four hours.)

A few years before, she had learned to make that confection at Ladurée. On this visit, she would attempt the store’s best-selling signature dessert, a raspberry and rose extravagance called the Ispahan.

A classically trained singer and a onetime student of the elite girls’ school Spence, Ms. Rossum has a reputation for precision, if not perfectionism — all of which might seem to make her a natural at baking. But while she loves to cook (“It’s just totally relaxing and actually something that I do to relieve anxiety”), she doesn’t bake much.

“With baking, you have to be so specific,” she said. “It’s much more like math. Cooking is more like jazz.”

Ms. Rossum arrived at Ladurée between rain showers. For “Angelyne,” she had spent months in caked makeup, three pounds of enhanced bosom and a series of blond bouffants. But as she descended the stairs to the freshly mopped basement on wedges paired with high-waisted pants and a ribbed, short-sleeved sweater, she appeared poised, streamlined and decidedly brunette.

Jimmy Leclerc, the executive pastry chef, immaculate in a monogrammed jacket, greeted her warmly and offered her a white apron, which she accepted, and a matching toque, which she declined. Her curls were tidily piled atop her head like a pastry topper. Why hide them?

She washed her hands, then surveyed the ingredients, signaling her appreciation with a very Angelyne-like “Oooh!” At Mr. Leclerc’s urging, she poured sliced almonds and icing sugar into a food processor and set them to combine into a coarsegrained mix. Then she whipped egg whites into soft peaks before asking Mr. Leclerc to add the simmering sugar water.

“I’m going to let you do anything that could create another scar on my body,” she said.

After folding the egg whites into the almond mixture and adding pink coloring, Ms. Rossum piped the mixture onto a baking sheet in tidy spirals about the size of a powder puff. One meringue she freestyled into the shape of a heart. Jazz!

A splotch of blush-colored batter landed on her forearm. “My life is very pink right now,” she said. Then she licked the splotch away. “No sugar left behind,” she said.

“Angelyne” is a funny sort of passion project for an actress who broke through in the 2004 film adaptation of “The Phantom of the Opera,” in which she wore Pre-Raphaelite ringlets and virginal white gowns. But Ms. Rossum was obsessed with Angelyne, after seeing the billboards as a teenager. (“I remember being struck by the audaciousness of the image,” she recalled.)

Angelyne could be dismissed as a bimbo, a fame chaser, an influencer without discernible influence. But Ms. Rossum prefers to see her as a performance artist and an exemplar of third-wave feminism.

“She did that all herself,” Ms. Rossum said, sipping an almond-milk cappuccino as the meringues baked. “There was no man behind her calling the shots. It was always her.”

The secrecy that Angelyne maintains also appealed to Ms. Rossum, who remains discreet about her marriage to the director Sam Esmail and their baby daughter.

“She has always been shrouded in mystery, which is an interesting thing for somebody who is so provocative and noisy in every other way,” Ms. Rossum said.

While The Hollywood Reporter claimed in 2017 to have solved the riddle of Angelyne’s identity, an identity that includes some early tragedy, Angelyne has never acknowledged it.

“People are not mysteries meant to be solved,” Ms. Rossum said. “If there was a desire to escape from a sorrow or pain, it’s that very intense fight away from that toward pink, toward positivity, toward lightness.” Pink, as Ms. Rossum sees it, is a radical choice.

With the meringues out of the oven and mostly cool, Ms. Rossum continued her own journey toward pink. After watching Mr. Leclerc prepare a sample pastry, Ms. Rossum began to assemble her own. On the bottom meringue, she piped the buttercream, flavored with rosewater, rose syrup and a few drops from an $800 bottle of rose extract, then squashed it down with a raspberry, placing a few more raspberries and some lychee slices around the side.

“If you’re an O.C.D. Virgo, this is for you,” Ms. Rossum, a Virgo, said, as she aligned the slices just right.

She topped it with a second meringue, then added a few more daubs of pastry cream (the better to attach a decorative raspberry), a chocolate L and a perfect fuchsia rose petal. At Mr. Leclerc’s urging, she added a few drops of sugar and pectin, which made the rose appear to shine with dew.

“I want to make sure I’m doing the House of Ladurée justice,” she said.

Ms. Rossum admired her irrefutably pink creation, which could be eaten that night, after a few hours’ refrigeration to crisp the meringue.

“She’s so pretty,” Ms. Rossum cooed. “I mean, look at the little dew drops. So shiny. I couldn’t be prouder. I feel very accomplished. Really.”