Home » For Two College Students, Finally a Place (and a Person) to Call Home
Life

For Two College Students, Finally a Place (and a Person) to Call Home 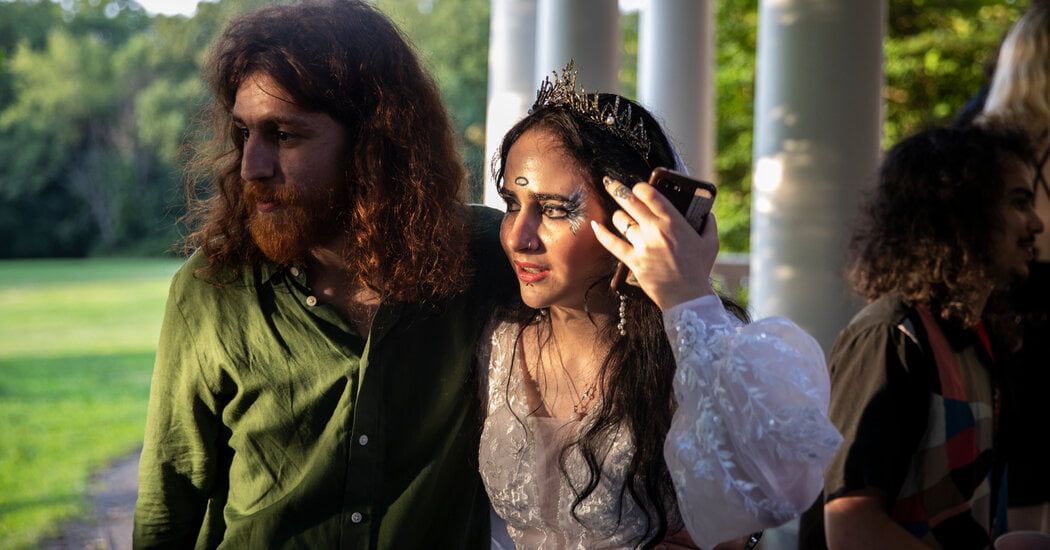 For Yolka Gessen and Mohamad Eisa, the concept of home is complicated.

Mr. Eisa, 24, is a native of Syria. In 2013, when the Syrian war escalated, the neighborhood in Homs where he lived with his mother and extended family fell under attack. Electricity was cut off; food and water were scarce. In July of that year, Mr. Eisa and his mother escaped to Turkey via Lebanon.

The two settled in Istanbul where Mr. Eisa attended high school and perfected his English by working at a traveler’s hostel. Within the year, with financial backing from the Ad.Dar Center, a community group which supports Syrians and Palestinians, he secured a scholarship to complete his final two years of high school at Friends Select School in Philadelphia.

His first experience of the country was sobering. “After the immigration officer read the name in my passport, I was searched and everything was inspected, including my phone and all my photos,” he said. “Then the officer told me, ‘Be careful, they know and see everything here.’ ”

Mr. Eisa landed with a kind host family, one of three with whom he lived for over two years. Alison Boden, his host mother, described the young refugee as “intellectually gifted, a principled person who was both honest with himself and others.” Though he made many friends, he never truly felt at home.

After graduating high school in 2018, Mr. Eisa accepted a scholarship to Bard College, where he is majoring in written arts and religious studies.

At Bard, he enrolled in a class called “Fact, Fiction and the Truth,” taught by the Russian American author and activist Masha Gessen, a staff writer at The New Yorker magazine and winner of the 2017 National Book Award in nonfiction for “The Future is History: How Totalitarianism Reclaimed Russia.” In Mr. Eisa, Mx. Gessen recognized a kindred spirit.

In 1981, a 14-year-old Mx. Gessen, who uses they/them pronouns, emigrated from Moscow to Brookline, Mass. with their family of Soviet Jews. Ten years later, they returned to Russia to work as a journalist, but in 2013, fled the country with their three children and partner at the time after multiple threats by the Russian government to remove children from L.G.B.T.Q. parents.

For Mx. Gessen’s class, Mr. Eisa wrote eloquently about his challenging experiences living in exile, and Mx. Gessen thought he might be a fine friend for their daughter, Yolka, now 20, also a student at Bard, a sophomore majoring in film and electronic arts. But before Mx. Gessen had the chance to make a formal introduction, the two students met on Tinder.

At their first meeting in November 2020, Ms. Gessen shared the story of her own arrival in the United States. Born in the U.S. but raised in Moscow, Ms. Gessen’s childhood was joyful but also fraught with uncertainty; arrests and beatings of family members and those in their L.G.B.T.Q. community were commonplace. “Moscow was my home, but it stopped being welcoming,” Ms. Gessen said.

Ms. Gessen’s family departed Russia in December 2013, when she was 12, and settled in New York City.

Like Mr. Eisa, Ms. Gessen found life in her new homeland didn’t square with her expectations. At school she was bullied and taunted for having queer parents. “I wrongly thought the U.S. would be a perfect place where we would be accepted and that there would be no racism or prejudice,” she said.

After struggling to fit in at a traditional high school, Ms. Gessen eventually studied with private tutors and by attending continuing education courses or auditing college classes at Columbia, Barnard and New York University. She also threw herself into political activism, participating in Black Lives Matter protests and joining organizations such as P.A.I.N. Sackler, which protests pharmaceutical companies profiting on the opioid crisis.

Mr. Eisa found Ms. Gessen cheerful, fun to talk with and a deep thinker, and Ms. Gessen was taken with Mr. Eisa’s calm intelligence. Through sharing stories, a connection formed but for some time, neither was certain if that bond was platonic or romantic.

Yet their friendship grew more intimate, and a few months later make-out sessions began to occur spontaneously. In August 2021, Ms. Gessen traveled to Russia for the first time since emigrating. Throughout her trip, the two texted constantly with Ms. Gessen sharing the details of her adventure: the smell of Moscow’s subways; the street food she was thrilled to return to; and the taste of kompot, a sweet juice made of boiled fruit that she loved as a child.

Upon Ms. Gessen’s return, she was fully smitten with Mr. Eisa. “Yolka fell in love first. It took a while before I could admit how much I loved her,” Mr. Eisa said. But by early 2022, he was on board and the two became an official couple. By then, Ms. Gessen had written 23 pages of poetry about Mr. Eisa.

“Yolka is the one who will get everyone dancing in the rain,” Mr. Eisa said. “She’s an amazing poet who really knows how to be present for the people she loves.”

But when Russia invaded Ukraine in February, it was Mr. Eisa who was the rock for Ms. Gessen. “I couldn’t handle seeing my people killing my neighbors,” said Ms. Gessen, who was bereft. “Refugees don’t have a premium on mental health issues,” said Mr. Eisa.

Once Ms. Gessen regained her emotional footing, the couple began loosely speaking of marriage. In spring, when Ms. Gessen traveled to Georgia with Mx. Gessen and her younger brother, the family stopped in Istanbul to meet Mr. Eisa’s mother, Suheir Yaghi, 49, who works with a Syrian women’s knitting collective, Knitstanbul. The visit fell over Ramadan and the group met at sunset to share a meal and exchange gifts. Tears were shed by all.

“Some were from love, others were about the pain of the separation of Mohamad and his mother,” Ms. Gessen said.

Not long after her return, on May 22, Ms. Gessen got down on one knee to propose marriage, presenting a silver ring to a surprised Mr. Eisa, who immediately slipped it on his finger. Two days later, Mr. Eisa summoned Ms. Gessen and their friends to Bard’s community garden where he dropped to both knees offering up a seashell which held a vintage engagement ring.

“Mohamad is my soul mate, both here and in heaven when we get there,” said Ms. Gessen who, though raised culturally Jewish, now identifies as Muslim. “Mohamad never pushed me to embrace the Islamic religion, but the way he talks of God seems right to me,” she said. For Mr. Eisa, acceptance of his religion further fueled his ardor and confirmed his commitment to Ms. Gessen.

“I would not be alive today if it weren’t for my faith,” Mr. Eisa said. “We have always both spoken with Allah, only now we are using the same terms.”

Mx. Gessen added, “It has been an active search for Yolka to find spirituality and that she landed with a religion that speaks to her is very beautiful.”

This past July, Ms. Gessen returned to Istanbul for a monthlong visit with Mr. Eisa’s mother. The women bonded in the kitchen where they cooked traditional Arabic specialties, including stuffed grape leaves, shakriya and lentil soup. “I feel I have a daughter now,” said Ms. Yaghi, tearfully, by phone from Turkey.

Mx. Gessen is also “thrilled” by the addition of Mohamad to their family: “They are in love, they have a mutually supportive, truly intimate partnership, and they are incredibly comfortable in each other’s presence — that’s all that matters.”

On Sept. 10, in the Blithewood Garden on the Bard campus in Annandale on Hudson, the couple were married by Lyle Bicking, a friend of theirs who was ordained by the Universal Life church for the occasion. Traditional Syrian wedding music played as nearly 100 friends and family gathered outdoors in the hot afternoon with the Hudson River and the Catskill Mountains as a backdrop.

After several delays, the bride’s little brother, Senya, now 10, and four younger cousins kicked off the ceremony carrying toy guns that spewed bubbles which floated gently in the warm air.

As the music shifted to a Russian ballad sung by Alla Pugacheva, Mr. Eisa entered the garden in a gray suit paired with a green open collared shirt, escorted by Svenya Generalova, Ms. Gessen’s mother. The bride, wearing a long-sleeved gown with a four-foot train, then arrived on the arm of Mx. Gessen. She had also drawn a halo on her forehead and angel wings around her eyes “to look angelic,” she said.

The couple traded heartfelt vows which included Mr. Eisa’s promise to “share in every enduring hardship” faced by his wife; to kiss her nose “whenever the opportunity presents itself”; and to “end every prayer” with her name.

Ms. Gessen vowed to “share everything, including all gossip”; to protect Mr. Eisa from cockroaches; and to let him know “when things need to change.”

“I vow to make everywhere we go feel like home,” Ms. Gessen said.

After the breaking of the glass, guests feasted on Palestinian food and tres leches cake, a favorite of the couple. Before the evening wound down, the bride had changed into a white tutu, fishnet stockings and fuzzy leg warmers, allowing her the freedom to dance to a variety of musical styles, which included Russian, Ukrainian and Arabic artists, D.J.’d by her older brother, Vladimir Gessen, 24.

Earlier in the day, Mr. Eisa connected with family members in Syria and Turkey by video chat. “This was the happiest day of my life, but the only thing that could have made it more perfect was my family’s presence,” he said. A cousin from Los Angeles, the first family member Mr. Eisa had seen in over six years, attended.

Unable to secure family housing at Bard, the couple have kept both their campus residences but have made Mr. Eisa’s single dorm room their martial home base.

“The only home I know is with Mohamad,” Ms. Gessen said. “Now the home is settled.”

Fashion is Fluid The officiant, Mx. Bicking, wore a dress, as did many guests of all genders. The bride identifies as gender fluid and the wedding party included those from across the gender spectrum.

War and Peace In their toast, Mx. Gessen referenced Ukraine’s recent victories, which they hoped portended a positive future for the union. Mx. Gessen wore a T-shirt printed with a quote from Ukrainian poet Serhiy Zhadan: “The worst is behind us and the most important lies ahead.”

Love is Catching Ms. Gessen previously agreed to throw her bouquet to her maid of honor, Carissa Schilke, but her aim was off. Instead, the bouquet was caught by Ms. Schilke’s boyfriend, Jasper Oltmanns, who stands 6’5” and who was equally thrilled about the prospect of marriage.

Poetry of the Heart In her vows, the bride vowed to translate 1,000 Russian love songs for Mr. Eisa who responded, “Same, but, like, Arabic.” While deaths are rare at soccer games, aggressive policing can...
13 mins ago
Intel’s self-driving company Mobileye files for an IPO
23 mins ago
Natural Remedies To Get Rid Of Aphids
1 hour ago