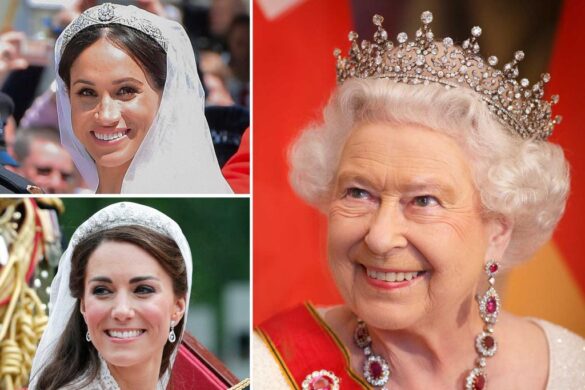 Queen Elizabeth — who died Thursday at age 96 — had one of the largest and most expensive private collections of jewels in the world, and at the heart of it are around 50 stunning tiaras. What will happen to these tiaras, and who will inherit them, depends on which jewelry collection they come from.

Some of the pieces — her crowns and brooches, as well as ceremonial maces and rings — form part of the Crown Jewels, which are displayed at the Tower of London and are gawked at by around 2.5 million tourists a year. This priceless collection of mainly ceremonial items, some of them going back 800 years, belongs not to a person but to the Crown and whoever is the monarch.

Similarly, there is the Royal Collection, which contains most of the royal family’s extensive artworks —the largest private collection in the world — and their jewels. All together, it makes up more than 1 million objects, some of them going back to the time of Henry VIII.

The Royal Collection is in itself divided into two portions. The bulk of the items are held in trust by the monarch of the time. And then there is the queen’s personal collection. This is mainly made up of items she inherited or was gifted by family members (her grandmother Queen Mary was famous for her love of jewels and was a particular fan of tiaras) or bought herself. Many of Queen Elizabeth’s recognizable tiaras are believed to be in her personal collection so, in theory, she could give them to who she wanted.

“It is likely that she would want to pass on items from her private collection to her loved ones,” royal commentator Josh Rom told The Post. “The bulk of the collection will pass to Charles — with Camilla as his queen consort — and then Kate, so they may not be left anything big [in the will].”

Over the years, Queen Elizabeth loaned many of them to family members for special events. In 2011 Kate Middleton wore the Cartier Halo tiara, which contains nearly 1,000 diamonds, at her wedding to Prince William, while Meghan Markle donned Queen Mary’s stunning Art Deco-style Diamond Bandeau for her 2018 wedding to Prince Harry. It was a tiara that hadn’t previously been spotted in public since the 1940s.

At Princess Eugenie’s wedding, also in 2018, the queen’s granddaughter wore the Greville Emerald Kokoshnik tiara, containing rose-cut pave diamonds and six large emeralds, which was inherited by the Queen Mother in 1942 but had never been worn in public by a royal woman before. Two years later, Eugenie’s sister, Beatrice, wore the famous Queen Mary’s Fringe Tiara for her wedding. It contains 47 delicate bars of diamonds and was originally loaned to then-Princess Elizabeth by Queen Mary for her wedding to Prince Philip in 1947.

So will the queen gift each of these young women the tiaras they wed in?

“She would have things she would want to gift to her loved ones and it makes sense to give them something she knows they will like,” he said. “There is one thing worth noting, though. If they are left these things in her will they will have to pay inheritance tax on what she has left them.”

As the tax is up to 40% of the value of the inheritance — and some of these tiaras are worth millions — the queen will have had to consider whether it is simply better for the
tiaras to remain in the Royal Collection and be borrowed for special occasions.