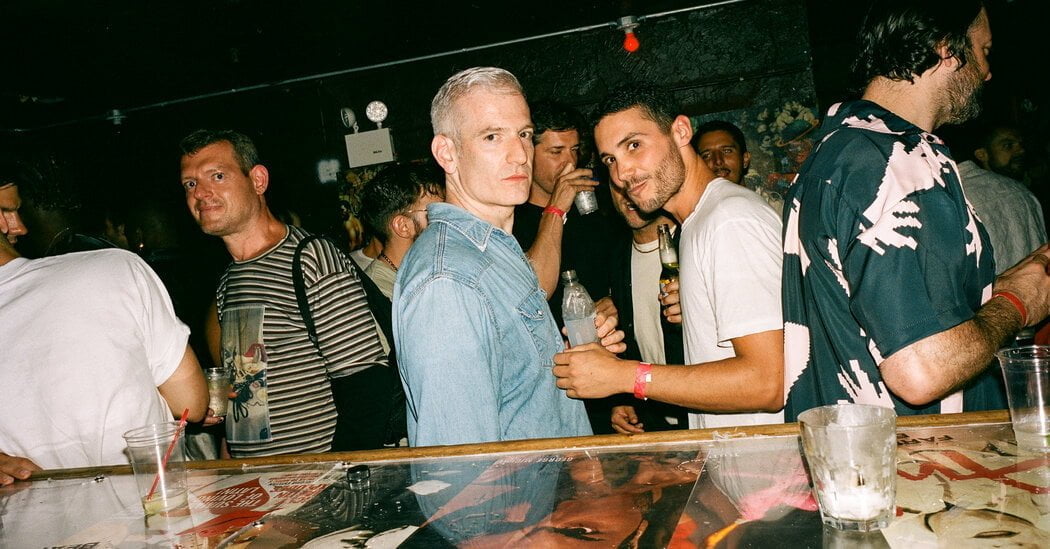 The Cock is a low-ceilinged, pitch-dark East Village dive that has been described by one website as “the last filthy gay bar in New York.” It shuns publicity, having been frequently raided by police back in the 1990s during the Giuliani administration, and is infamous for its cruisy sex scene. For those reasons, it seems an unlikely site for party hosted by a luxury fashion company.

But last month, Farfetch, the online fashion retailer based in London, held a party there to celebrate Pride. The artist Stephen Tashjian, better known as Tabboo!, covered the facade with original artwork. And the artist Narcissister, dressed as Marilyn Monroe’s character in “The Seven Year Itch,” performed a reverse striptease for the crowd, which included Emily Ratajkowski, Julia Fox and Jeremy O. Harris.

“These days, don’t assume that because it’s a corporate brand, they want it to be a rainbow flag, dumb-dumb idea that is too digestible,” said Mel Ottenberg, the editor in chief of Interview magazine, which was a host of the party. “Farfetch let us do something cool as opposed to something boring.”

Indeed, some global brands have found that it is more authentic to give a party at a gritty hangout than at, say, a generic event space or a shiny boutique.

A few weeks before the Farfetch event, Coach kicked off Pride month at the Monster, a venerable Greenwich Village gay bar near the Stonewall Inn that has been around since 1981. Staff from Vogue mingled in a club known for drawing older men and their much younger pursuers.

Before that, Burberry took over Lucien, a sceney East Village bistro (and celebrity hangout), for 10 days in May. The British fashion house replaced the restaurant’s awning with its signature Burberry Check pattern, redecorated the interior and created limited-edition T-shirts to celebrate what it called “heritage, legacy and community.”

And when Opening Ceremony celebrated its recent collaboration with the designer Peter Do, it did so at Nam Son, a restaurant on the Lower East Side that serves inexpensive Vietnamese food in a no-frills space with a drop ceiling and brown-tile floor.

The choice of venue for Opening Ceremony was a nod to the cultural heritage of Mr. Do, who is Vietnamese. But in other cases, fashion brands may be reflecting the trend of taking the culture of the streets and making it luxury. When Balenciaga is selling a pair of ratty, “extra destroyed” sneakers for $1,850, it hardly makes sense to have that party at the Carlyle Hotel.

As New York — and especially Manhattan — has become gentrified and wealthy, old-school establishments feel fresh and genuine, precisely because they feel out of time.

“You can’t recreate the patina and energy of a space like the Monster in a white-box venue space,” Stuart Vevers, the creative director of Coach, wrote in an email. “There’s a feeling of freedom and possibility that’s unique to spaces like the Monster in New York that I wanted to celebrate.”

Perhaps that’s the same reason the old-fashioned red sauce joint Forlini’s became an unlikely cool-kid hangout. But as the closing of Forlini’s showed, places that seem to be there year after year, miraculously untouched by rent pressures or other changes, are endangered.

“It’s legit, it’s small, it still exists,” said Mr. Ottenberg, explaining why he suggested the Cock for the Farfetch event. “We’re so lucky that it’s not some cleaned-up, new New York version of what it once was.” He might have chosen the Monster, he added, but Coach got there first.

Debate: What Europe’s cost of living crisis means and how we got here