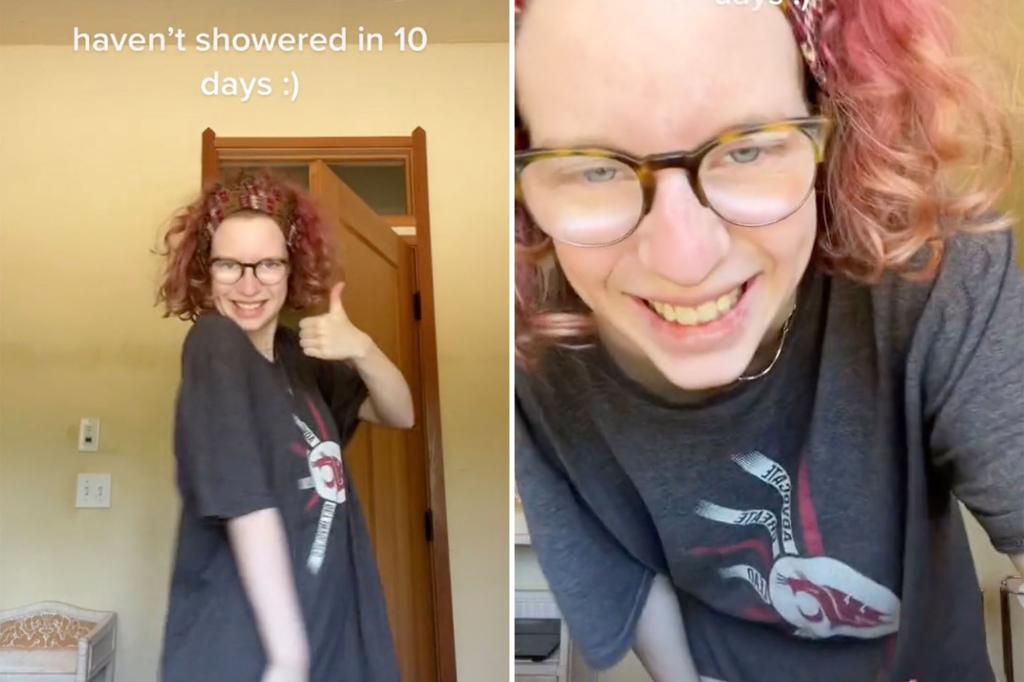 Showering is something most partake in daily, but one woman is claiming she regularly goes over a week without bathing — and she has never felt better.

Aydan Jane, 23, has both intrigued and disgusted people after posting a TikTok revealing she showers once every 10 days.

“I am living proof that you don’t have to bathe often to look and feel good,” she said in the video that’s been viewed 2.9 million times.

Aydan — who calls herself ”the girl who doesn’t shower & shows her period online” — claimed the only noticeable difference is her hair would be curlier if she washed her hair more regularly.

She also responded to people’s queries of the odor situation, saying she doesn’t smell — despite skeptics urging her to shower more.

“I would argue it’s better for the environment if we shower less because water’s a precious resource,” Jane said in another clip.

The TikTokker said her shower schedule doesn’t change when she has her period, either.

“Your period does not make you dirty. Periods are not dirty,” she said, responding to a comment.

”Also important to note that the vagina is self-cleaning, so you don’t have to clean it — cause it cleans itself,” she said.

However, most commenters were not on board with her once-every-10-days bathing schedule.

The lack of regular showering was embraced by Hollywood last year, with celebrities like Jake Gyllenhaal, Matthew McConaughey and Cameron Diaz admitting to not showering daily.

Although Dr. Julie Russak, a private practice dermatologist in Manhattan, previously told The Post there’s no harm in leaving a day or two between showers, she said not showering actually can harm the skin.

“You also have to still think about all the bacteria and [toxins] that accumulate on the skin,” Russak said. “When the body sweats … it’s all a natural way of removing toxins. Still, you don’t want to leave that sitting on top of your skin too long, encouraging pimples, folliculitis and other skin infections.”

Russak also said exercising regularly should follow with a quick rinse, although “only in the areas that have higher concentrations of sweat accumulation.”

“When you smell, it’s time to take a shower,” she said, adding that the bacteria that causes body odor occurs alongside the same ones that can cause infections.