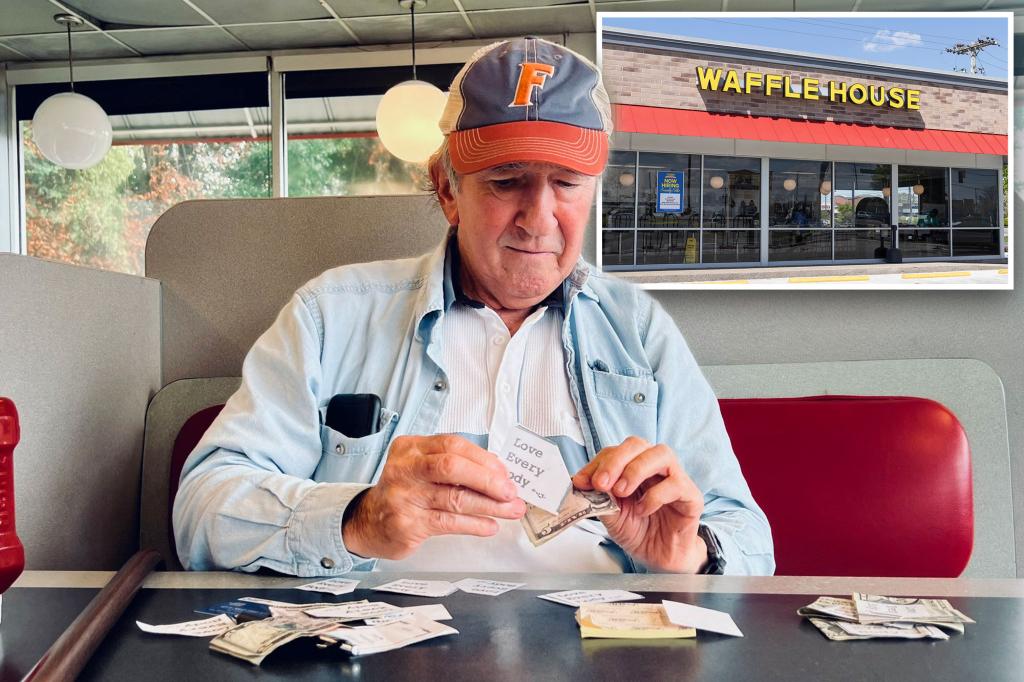 He’s the Robin Hood of the Waffle House.

Former Barack Obama campaign spokesman Kevin Cate tweeted the touching interaction he had with a man who was giving away money with a message at a Florida Waffle House.

Cate was dining at the chain in Midway when he spotted a man in a booth attaching notes to $1 and $5 bills. He approached the unnamed man and asked what he was doing.

The patron revealed that he gives cash to adults and kids at Waffle Houses and other businesses. In fact, according to Cate, the anonymous good Samaritan has given away $13,000 since 2014.

He also attached a note with the phrase “Love everybody,” because those were his late mother’s final words to him.

“She didn’t say ‘I love you,’ she said ‘love everybody.’ So that’s what I’m doing. Loving everybody,” the man told Cate.

His tweets have gone viral, with the picture of the man receiving over 63,400 likes and 10,200 retweets.

Many users thanked Cate for sharing the conversation to put some good back into the world.

“I just needed to tell you thank you for posting this. Ever since my sister was killed in the Boise mall shooting, it feels as though a snowball effect has taken all of the light from the world. This thread helped me remember the lights still here,” one user wrote.

Another said, “Wow you have no idea how much I needed to read this. So much time spent doom scrolling on Twitter and feeling so sad and helpless about life. I forget the joy I have felt from helping those in need. This is what I need to be putting my energy into, spreading love and kindness.”

While Cate has not provided any more details about the generous mystery man, he did say the response from Twitter users has been overwhelming.

“If you have time, read the replies. People are sharing their own stories of ‘love everybody,’” he wrote. “While he was alone, clearly his mom’s love is still with him and now all of us.”