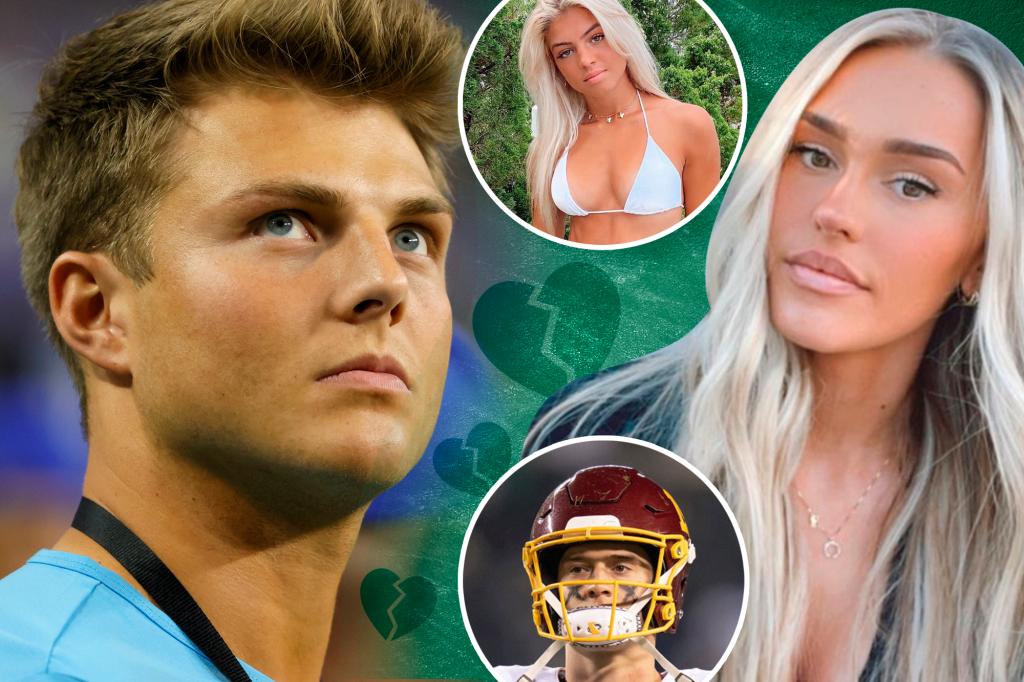 It’s the off-season, but New York Jets quarterback Zach Wilson is still getting plenty of action.

The 22-year-old has found himself starring in a real-life soap opera after ex-girlfriend Abbey Gile, also 22, accused the Brigham Young University phenom of sleeping with his mom’s close friend. Adding to the drama is the fact that Gile is now reportedly dating Wilson’s former college roommate, Washington Commanders wide receiver Dax Milne.

Those allegations are just the latest in what’s been a full lineup of spectacles surrounding the young QB — once thought to be a wholesome, handsome Mormon boy who loved his mama and would eventually marry his beautiful longtime sweetheart Gile after she’d cheered him on for years.

In a since deleted Instagram post, Gile accused her ex of “sleeping with his mom’s best friend,” calling the QB a “homie hopper.”

Her comments came only a few short weeks after Wilson — who silently scrubbed Gile from his social media in early 2022 and reportedly did the same to Milne — was spotted in the Bronx at a Yankees game with New Jersey-based Instagram model Nicolette Dellanno, 20, in June.

Meanwhile, Wilson’s mother Lisa brings plenty of her own Instagram drama — recently calling out “Satan” for lurking on social media. She first gained attention in April 2021 after she posted photos with her son when he was drafted second overall.

The cameras couldn’t keep off the stunning 49-year-old mom that night — who was initially thought by many fans to be his sister because of her youthful looks. Lisa began trending on Twitter shortly after and has become a loud and proud voice for the team on social media.

But, not everyone is a fan. This time last year Lisa revealed that her son offered to buy her off Instagram with his new salary because he couldn’t “stand these people treating my mom like crap.”

Supposedly scrimmaging with his mom’s bestie isn’t the first time Wilson has played for the Cougars. In 2018, he took not one but two older women — beautiful BYU cheerleaders Breanna Penrod and Brynn Hiatt — to his high school prom.

Jets fans have been supportive of Wilson’s unexpected plays.

Some of Wilson’s teammates were also quick to have fun with the fumbling rumors.

What do the leaked Uber Files reveal about revolving doors in Europe?

Who is Lisa Wilson, mom of Jets quarterback Zach? 5 things you didn’t know