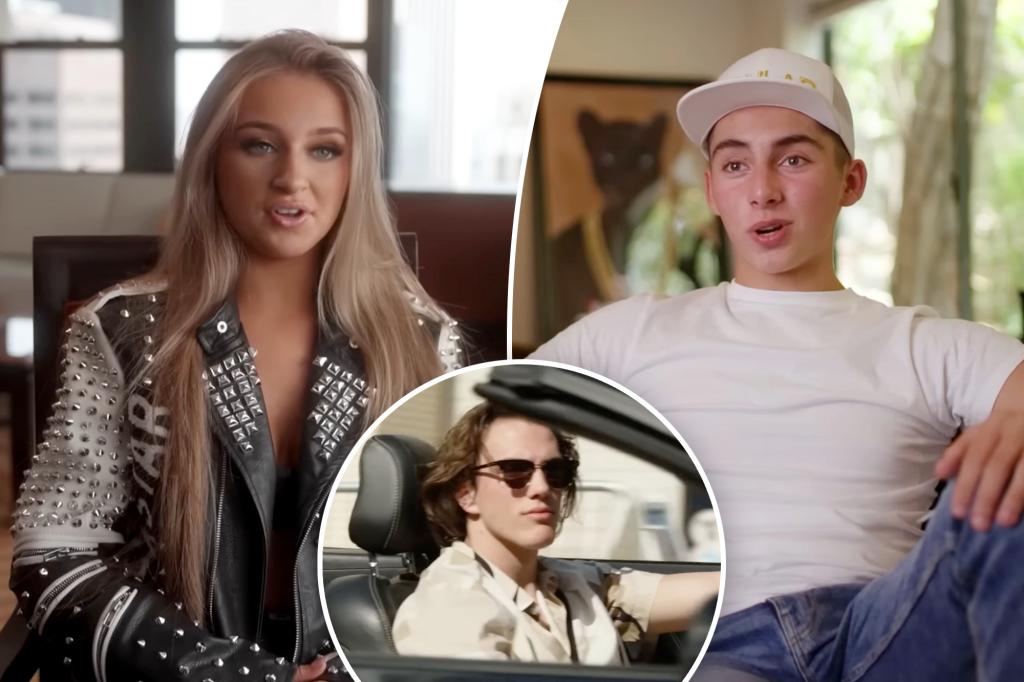 Three of the country’s richest “self-made” teenagers are giving viewers an inside peek into their luxurious lives in the latest episode of “Bling Life.”

The show recently introduced a trio of millionaires cashing in on their “bougie” lifestyles, all before even breaking out of their teens: YouTube influencer Donald “Donlad” Dougher, 15; designer Isabella Barrett, 15; and TikTok star Pierce Woodward, 19.

Dougher jumped on the YouTube train a little later than most but he sure didn’t miss it.

The 15-year-old launched his YouTube channel in 2019 and now has more than 597,000 subscribers watching his videos.

He’s given himself an aspirational nickname —calling himself “The Richest Kid in America” — but is estimated to be worth between $900,000 and $1.2 million.

Dougher explained that he began filming videos with fellow YouTubers including FaZe Rug and Tanner Fox and then joined the Piper Squad before branching out on his own.

“It just slowly keeps growing,” he said. His channel mainly consists of day-in-the-life videos as he takes his viewers along when he gets his first car and goes to Ikea for the first time.

His mother, Yvonne, is “always supportive” of her son and his work ethic.

During the show, Dougher showed off his new home overlooking downtown Los Angeles, where he lives with his parents and sister — and his expensive shoe collection.

His favorite is a pair of high-tech Nike sneakers that lace themselves up when you push buttons on them. Dougher also displayed a few other pairs that he estimated cost around $2,000 to $3,000 each, including a pair of reflective Yeezys.

“I have a luxury taste. I’m kind of bougie,” he admitted. “I like the nice things in life.”

That bougie-ness might just run in the family. The show captured the moment Dougher surprised his supportive mom with a $10,000 makeover of her 2019 McLaren 570S, which cost an estimated $230,000.

“I’ve heard her talking about wanting to wrap it, but she’s been saying that ever since we bought it, for three years,” he explained. “So I decided that maybe I should put some action into it.”

His mother was so ecstatic to see her sports car wrapped in her favorite color — purple — that Dougher joked his mother had “never hugged me so tight.”

After quickly earning riches and fame before even graduating from high school, Dougher reflected on what’s in store for him.

“In the future, the main thing I want to do is grow my channel,” he shared. “All my money I either save or funnel back into the channel because I want to help it grow to get the biggest audience possible, the most subscribers, the most views.”

Teenage fashion designer Isabella Barrett also hasn’t finished high school yet, but she’s been in the spotlight for as long as she can remember. The blonde influencer first shot to fame when she was cast in TLC’s popular reality show “Toddlers & Tiaras.”

She claimed she was an obvious choice for casting because she “loves attention” and “being on camera.”

Capitalizing on her reality TV stardom, Barrett and her mother started their jewelry line Glitzy Girl, which reportedly made Barrett her first million.

“At the age of 6 years old, I became named one of the youngest self-made millionaires in the US,” she claimed.

After a failed gift-sending company, Bear in the Box, she turned to fashion and created her first clothing brand, House of Barretti, which features a collection of suits for teens costing from $210 to $599.

“I really saw no one making them,” she explained.

The cameras were rolling when Barrett debuted her collection at New York Fashion Week with 65 models and two costume changes for herself.

“This is a pretty big day because this is a really big collection for me, and there’s going to be a lot of media,” she said before the show.

Barrett then welcomed guests to an afterparty, where she had six more costume changes and signed a $85,000 check for the lavish event.

“Having my own name on a checkbook is definitely scary for my parents, but great for me because I don’t have to wait for my mom at the bank anymore,” she explained.

While the young entrepreneur has been bringing in the big bucks since she was toddling around, Barrett is just having a good time.

“Right now, I feel like my goal is just to keep doing what I’m doing because I’m having a really great time,” she said. “As long as I’m having fun, that’s all that matters.”

Pierce Woodward, who was 17 years old at the time of filming, also reportedly made his first million without graduating from high school.

The TikTok star and jewelry designer dropped out of school at 17 when his social media and accessory business took off — and he isn’t looking back.

Woodward started his career by posting modeling photos on Instagram before he shot to TikTok fame and amassed more than 1.6 million followers.

As he was growing his following, he also started his company, Brand Pierre, out of his parents’ garage. The line features collections of rings made out of vintage spoons, and he capitalized on his TikTok fame and expanded his brand by making rings for fellow famous TikTok influencers including Noah Beck and Dixie D’Amelio.

“I remember when Pierce came to us and talked that he wanted to sell rings online I thought, ‘You know what? You got to start somewhere,’” his father, Woody, said. “I didn’t know it would turn into what it turned into.”

The first Brand Pierre drop of 23 rings allegedly sold out in just four days. He claimed he now sells anywhere from 1,000 to 1,500 rings per drop, in addition to earning $100,000 a month from TikTok.

“I’ve had a goal since I was a little kid to save up six figures by the time I was 18, and I’ve finally been able to accomplish that,” he said.

Woodward admitted that dropping out of high school was a “terrifying experience just because all the odds are against you.”

His mother, Shaylene, was also terrified and said she “had a heart attack” when her son first broke the news, but she still has “a lot of faith in what he was doing.”

At one point, the family took advantage of Woodward’s new free time and decided to sell all their belongings to travel around the world, but then the COVID-19 pandemic hit.

“We were completely destitute, had nowhere to go, and had to just start from scratch,” Woody recalled, though his wife was sure to clarify that they were “not quite destitute.”

To thank his mother for her unwavering encouragement, Woodward surprised her with a rented white convertible Corvette — the same model car she sold years ago to support the family — and shockingly filled the trunk with $50,000 in cash.

He explained that the money was for Shaylene to choose whatever dream car she wanted.

Since his travel plans were canceled due to the pandemic, Woodward will be leaving the luxury sports car behind and plans to adventure.