Home » Let Them Have Couture
Life 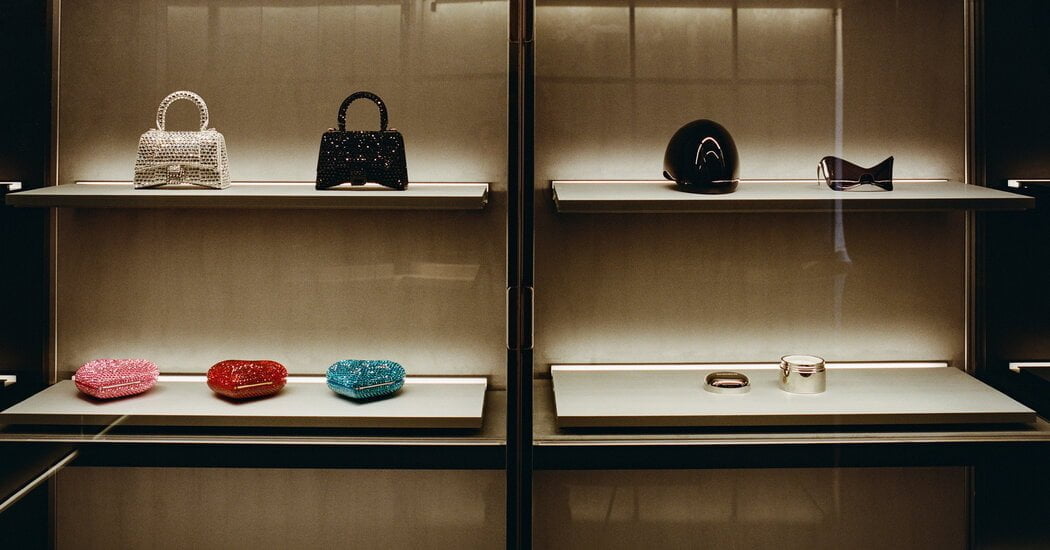 PARIS — I spent quite a long time sniffing the candle, twisting the mirrored jar around in my hands and tilting my head, as if inhaling from different angles might yield new discoveries.

I was probing for smells I’d read about earlier that day, in a news release from Balenciaga about the candle. The list included “hints of burnt incense, tobacco smoke, warm skin, old paper, tanned leather, aged wool, delicate silk, exotic fur, oak and even the oiled metal of sewing machines” — all scents that had apparently been extracted from the walls of the Balenciaga couture house in Paris, its archive and the belongings of its founder, Cristóbal Balenciaga. Together they were meant to evoke “a place of historical importance.”

I can’t say whether the candle smelled like the warm skin of Mr. Balenciaga, who died in 1972. A store employee was standing by, watching my nostrils flare as I tried to reach some conclusion beyond “leathery,” “kind of spicy” and “pleasant.”

I put the candle back on its shelf. She slid the tinted glass door shut in front of it.

The store had been open only a day, and this candle was the first piece of inventory I touched. The scent was originally created to diffuse during last summer’s couture show, Balenciaga’s first in 53 years. To follow its second couture 2.0 show, the house decided to open a couture store. That was a thing which, until now, didn’t strictly exist.

In Paris, only a small number of fashion houses are officially designated to make haute couture collections — made-to-order clothing for a select group of clients. There is nothing in fashion more exclusive than couture. These pieces take hundreds or thousands of hours to produce, largely by hand, and cost five or six figures to buy.

But shopping for couture is an experience shrouded in mystery, held in salons behind closed doors for the privacy of those with enough wealth and power to expect it.

Balenciaga, the disrupter of high fashion — now a conduit to pop culture with its cartoons and Crocs, led by creative director Demna — wanted to try something new. It wanted a store with walk-in hours, where garments from its couture shows could be tried on, altered and purchased on-site.

“Right now, even if people can afford couture, they can’t find it,” said Cédric Charbit, the chief executive of Balenciaga, adding that couture was a “meaningful part of the business” without disclosing exactly how meaningful.

“It is a gateway to access couture, the missing link between reality and the dreams of couture,” Mr. Charbit said of the new store. “The idea it is only for an elite is no longer valid. We need something transparent, something inclusive” — a staggering concept in the context of clothing that can cost as much as a down payment on a house.

As with any disruption, there were some hiccups to overcome. According to the brand, the store was open by appointment on Mondays and Saturdays, welcoming walk-in shoppers the rest of the week.

I tried to walk in without an appointment on a late Thursday afternoon and was initially turned away, told the store wasn’t free at the time. (Twenty minutes later, I was allowed inside accompanied by a member of the Balenciaga public relations team.)

The store has separate entrances for women’s wear and for men’s, a distinction that seemed archaic given the gender fluidity now common in fashion, and which Balenciaga has otherwise championed. During last week’s show, an androgynous model wore the penultimate, hyper-femme look: a taffy-pink taffeta gown with a skirt so large it couldn’t fit through the doorways where the show was held.

That space, upstairs from the new couture store, was a replica of Cristóbal Balenciaga’s all-white salon — a tribute to the house’s past. But downstairs, the new store is coolly futuristic: all dark-hued glass, ashy curtains and concrete, with black leather ottomans that seem sculpted with wrinkles. The architecture design was conceived by Sub, a studio founded by Niklas Bildstein Zaar and Andrea Faraguna, in a longtime collaboration with Demna.

About a dozen couture pieces of clothing hung in each gendered store, along with a few that hadn’t appeared on the runway (including a crystal-encrusted blazer on the women’s side). There was a selection of shoes and bags (super-tall tough-guy boots, sparkling heart-shaped clutches) and limited-edition objects sold only at this store. Like two porcelain sculptures modeled after looks from the first couture show — the Balenciaga versions of Precious Moments figurines, though standing more than a foot tall and costing 15,000 euros (currently about the same in U.S. dollars).

Two prominent accessories from last week’s runway show were also for sale: the aluminum Bluetooth speaker handbags (surprisingly heavy, 8,500 euros) and the reflective face shields (surprisingly light, 5,500 euros). By the store’s second day in business, it had already sold out of the alien-esque masks in size medium (a quantity of five, according to a salesperson).

In the cavernous dressing room — almost as big as the stores — I tried on two pieces from the recent show. The first was an oversize red T-shirt layered over a pink T-shirt. It had a crushed effect, like hardened papier-mâché but embedded with bendy metal allowing the wearer to sculpt the hem into different shapes. It was a strange sensation, wearing something that I was meant to shape and transform, rather than something meant to shape or transform me.

I looked at the price tag, which had no logo or bar codes, just the style handwritten in calligraphy: “crinkled aluminum T-shirt,” 7,500 euros. (I was told Demna had worn a similar style earlier that day.)

The other piece was a long trench coat upcycled from belts. Thousands had been collected from Parisian vintage stores to make the coat, plus a leather dress, pants and jacket in the collection. I’d learned the price of the coat before I dared to wrap myself in it: 50,000 euros.

This was more than one year of median rent in Manhattan. It was much more than I made in my first year working in journalism. I pointed that out to the lovely, energetic salesman who was helping me. He chalked it up to different scales of living.

And to play the game of justifying a big purchase using a cost-per-wear calculation — with couture? “You are ruining it because it’s about the idea,” he said. “It’s more than a garment.”

It occurred to me that was why I picked up the candle when I walked into the store, before I reached for anything else. At 350 euro (or 200 for a travel size), it was among the few items in the store I would or could reasonably take home.

It, too, was mostly an idea.

At Yad Vashem, Israel’s Holocaust memorial, a reaffirmation of life.