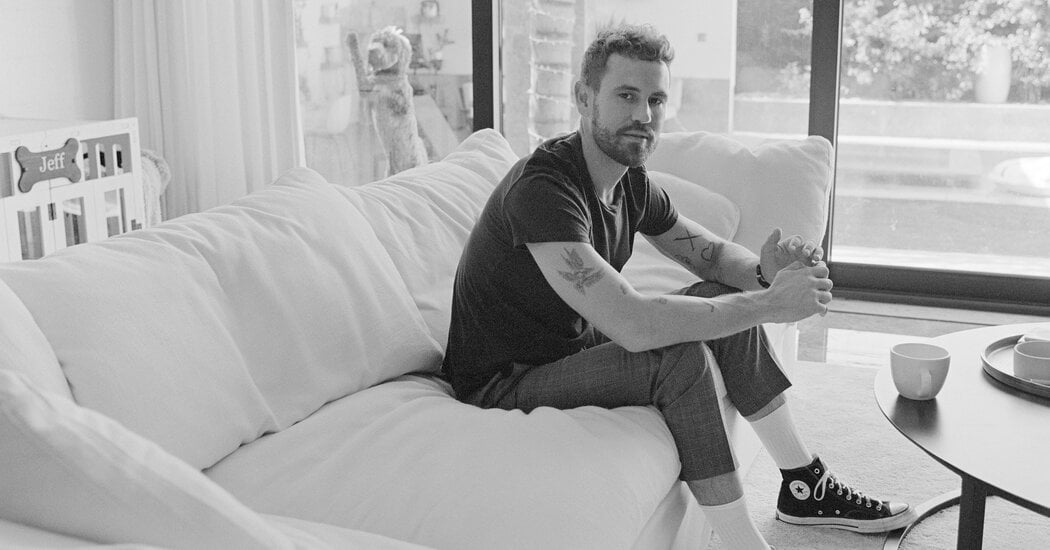 LOS ANGELES — In 2014, during “After the Final Rose,” a live TV special that followed “The Bachelorette” finale, the season’s runner-up Nick Viall turned to the bachelorette, Andi Dorfman, and said: “If you weren’t in love with me, I’m just not sure why you made love with me?”

The backlash was immediate. “I definitely wish I didn’t say it,” Mr. Viall said in an interview in June. “I’ve learned to accept that I said it, owned that I said it and learned from saying it.”

“It’s definitely a butterfly effect,” he said. He’s not proud of that moment of forthrightness, but if it hadn’t happened, he may not have appeared on three additional seasons of “Bachelor” franchises: the Kaitlyn Bristowe-led “Bachelorette,” “Bachelor in Paradise” and, finally, as, actually, “The Bachelor”

Would he have starred in a redemption arc in which he introduced meta-commentary about the shows within the shows themselves, and then on his relationship podcast, “The Viall Files?” “He’s very honest, which is something that you don’t see,” said his friend Rachel Lindsay, contrasting him with others in the world of “The Bachelor.” “People are so often trying to be like another lead.”

Mr. Viall said that he prided himself “on being self-aware.” “I don’t want to be the butt of a joke or whatever,” he said. “The good news from me, from a reality TV standpoint, I can’t not be myself.” Without that inability to not be himself, would Mr. Viall be publishing “Don’t Text Your Ex Happy Birthday,” a book of dating advice that comes out Oct. 4?

When we talked in his modern home in Los Angeles, Mr. Viall, 41, expressed very few regrets aside from his confrontation with Ms. Dorfman. One is having the “Viall” in the title of “The Viall Files” rhyme with “file,” rather than how his surname is actually pronounced: Vy-AHL.

Mr. Viall’s home is filled with art, some of which he is more knowledgeable about than others; he chose many of the modern pieces himself, but when I asked about a reproduction print of a painting by Gustav Klimt, Mr. Viall said, “Pardon me?” It emerged the more classic works were furnished by his girlfriend, Natalie Joy, a 24-year-old model and surgical tech who works for a plastic surgeon who specializes in eye lifts.

Mr. Viall lives in the Valley Village neighborhood, where a surprising number of reality television alumni have settled, including many cast members of the Bravo reality show “Vanderpump Rules.”

Another neighbor is Ms. Lindsay, who was cast on Mr. Viall’s season before becoming the first Black Bachelorette,” and later a correspondent on “Extra.” Ms. Lindsay was one of Mr. Viall’s finalists because of their friendship, he said, and because he was attempting to make sure the top four were a compelling cast. “By the time I was the Bachelor,” he said, “I wanted to meet someone, and I also wanted to make a good TV show.”

Ms. Lindsay said Mr. Viall supported her when she was criticized by fans after, among other things, an interview she did with the host Chris Harrison in which Mr. Harrison defended a contestant’s racist Instagram posts.

Mr. Harrison subsequently left “The Bachelor.” Mr. Viall gave Ms. Lindsay his podcast “to speak about something that was so important to me,” she said, adding, “so many other people weren’t giving that space to me in the ‘Bachelor’ world,” she said. Others, she said, expressed empathy privately but were unwilling to do so publicly for fear of damaging their relationships with ABC, which distributes “The Bachelor,” or Warner Brothers, which produces it.

But Mr. Viall’s persona isn’t fully benevolent. He possesses both a borderline self-destructive frankness and the savvy to know how to use it to his advantage.

“He is opportunistic,” said Ben Higgins, who also appeared on Ms. Dorfman’s season before becoming a “Bachelor” lead. “He will make sure that people know what he wants and what he’s thinking. It’s not a bad thing. He’s willing to do the things that other people maybe aren’t willing to do so that his foot’s in the door.”

For a year after Mr. Viall’s debut season was broadcast in 2014, he kept his job at Salesforce in Chicago, while being recognized at bars. But “I was not the same person,” Mr. Viall said. “You’re trying to manage two worlds in your brain, in a way.”

It was around this time that social media made it possible for former contestants to earn money from their appearances on the show, so he capitalized on that.

But he realized, he said, that he couldn’t make a living from Instagram posts. Mr. Viall said he thought, “I definitely have a window to make something that’s mine, and I’ve just got to figure out what that is.’”

That window was the opening for his podcast, “The Viall Files,” which he started in 2019. “I had the guts to say how I really felt without editing myself too much, where it would just be boring,” he said.

Mr. Viall’s confidence eventually inspired him to nominate himself as a replacement for Mr. Harrison. Mr. Viall said that though he didn’t expect to get the job, he pitched himself as an empathic mentor-host hybrid who could relate to contestants: “I’d love to be between the cast and the audience and create conversations that are happening anyways that you guys don’t want to be a part of,” Mr. Viall said he told an executive.

The Viall paradox — that the thing that made him famous keeps him from both ever fully leaving that world but also from ascending to the top of it — is present in his book. He was introduced to his editor Samantha Weiner by Elon Gale, a former “Bachelor” producer who now produces the less chaste HBO Max dating reality series “FBoy Island.”

Ms. Weiner said Mr. Viall initially envisioned a collection of “Ask Nick” questions his followers had written to him, along with his responses. With Rachel Wharton, a book doctor, they settled on aspiring to an updated version of “He’s Just Not That Into You,” with a format roughly based on the beats of a relationship: meeting, deciding whether you like someone, establishing and enforcing boundaries, being honest about whether that’s happening, and getting out of the situation if it’s not.

Mr. Viall is dyslexic and was nervous about writing a manuscript from scratch, so he landed on a work process to make him feel more comfortable. In addition to the “Ask Nick” questions, the team at Abrams Books would submit Mr. Viall romantic issues they had made up, some of which he was not entirely comfortable with.

There are chapters in the book that he was reluctant about, he said. “I’m talking about sliding into someone’s DM,” he said.

Though Mr. Viall is more comfortable relaying insights gleaned from personal experience — the best chapter in the book is an accounting of his first two relationships and his own culpability in their failures — he does get into what he calls “basics.”

“When I’m giving advice about how to approach someone in public,” he said, “I imagine some people reading it being like, ‘Duh.’ But I will say — talking to a lot of people about dating — I’m sometimes shocked to see how people engage with people.”

Putting It All Together

During much of his interview with The Times, Mr. Viall expertly constructed an elaborate pizza, which he has been making since college but now includes a tomato sauce recipe he learned from his former fiancée Vanessa Grimaldi.

When his publicist expressed hesitation that I wanted to go to Mr. Viall’s home for the interview, I mentioned other celebrity houses I’d gone to for articles, including Ryan Reynolds’s.

Then, right before I met with Mr. Viall, Mr. Reynolds appeared on the Netflix series “My Next Guest Needs No Introduction” and made pizza for David Letterman. Was the choice to cook the same thing for me a coincidence? “I watched that one,” Mr. Viall said, noting that he’s been compared to Mr. Reynolds before. “I don’t know if that makes me narcissistic, but I just think he’s really funny and talented.”

According to a screen shot of data from Kast, Mr. Viall’s said podcast was downloaded about 5.1 million times in March. His stated goal is to create common understanding, “because it seems like the genders are getting further apart. I think it’s a product of technology and the world we’re in.” Mr. Viall said he believes all The internet “does is reinforce ideas.”

As the number of weekly episodes rises (he started with one a week and said he just had a meeting about increasing from three to four), Mr. Viall will be forced to expand his purview beyond a show he’s intimate with and the dating lives of people who call in.

Recently, Mr. Viall covered the Amber Heard and Johnny Depp trial and found himself grappling with material that performed well but on which he is not an expert.

The professionals he brought on had to be toned down in postproduction. “We had a therapist,” Mr. Viall said, “She said, ‘I have no empathy for people who don’t get therapy.’ And I’m like, I think I’m just going to go ahead and edit that out.” He also decided to excise provocative material from a body language expert who was staunchly anti-Heard.

“I sometimes think, will this be OK in five years?” Mr. Viall said. He cited Joe Rogan, who presents guests as, ‘I’m just having people on, letting people talk.’ It’s like, OK, well, to a certain degree, I guess, but you are responsible for who’s on your show.

We eat the pizza, which is exceptional, and Mr. Viall games out his press tour for “Don’t Text Your Ex Happy Birthday.” He’s been invited to go on “Live With Ryan and Kelly,” but he’s wary. “I don’t think Kelly Ripa is going to respond well to a guy from “The Bachelor” writing an advice book that women read,” he said. “So I don’t know if we should do that.”

He explained the calculation with typical candor. “Last time I went on there, she just was pretty harsh,” he said. “She wasn’t, like, terrible. She just wasn’t as warm as she would be, say, with Ryan Reynolds.”

‘This is America’s fight’: Europe largely stays out of the fray on Pelosi’s trip.