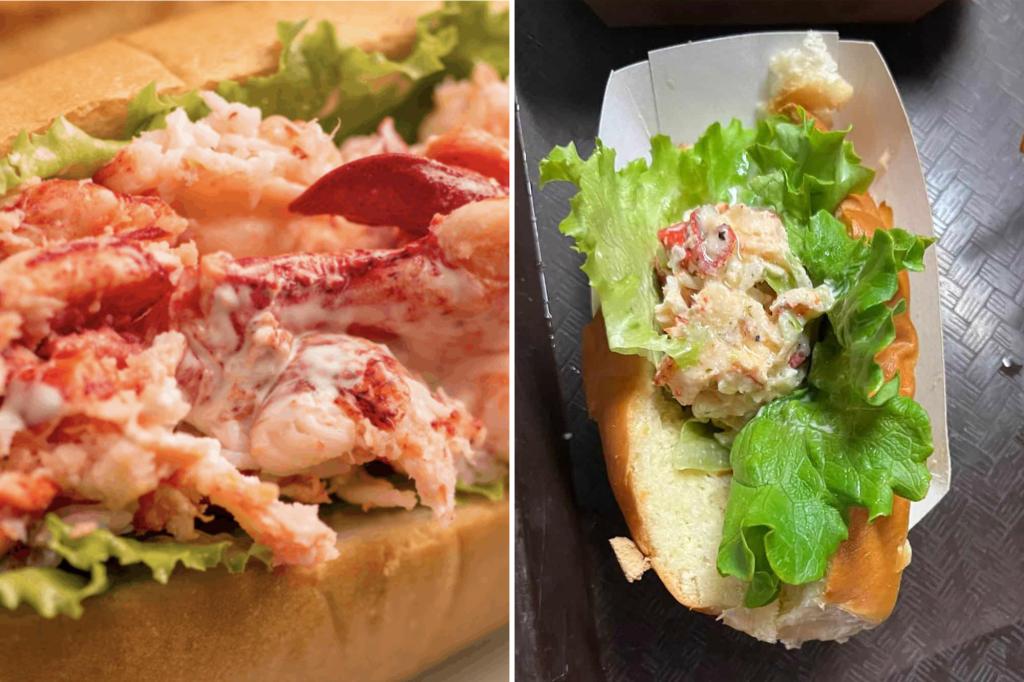 Customers at Disneyland and Disney World are griping about skimpy, overpriced food portions at the theme parks — with some even slamming the meals as “disgusting slop” and “prison food.”

One posted an official ad for Disney World’s $16.99 lobster roll, which shows it overflowing with chilled, juicy lobster meat cradled in a bed of crisp greens.

Next to that the guest, who called herself “Marlene,” posted an unappetizing photo of what she actually got — a beaten-up hot dog bun with a tablespoon-size scoop of dried-up lobster meat sitting atop half a lettuce leaf.

After she complained, a Disney employee “did bring her an extra lobster roll sandwich to make up for the portion size,” the blog reported. “But unfortunately, Marlene said the second sandwich was just as bad as the first one.”

The uproar started, according to Disney blog “Inside the Magic,” after chief financial officer Christine McCarthy said late last year the company will begin “reducing portions” at Disney Parks restaurants, claiming that it “would be good for Guests’ waistlines.”

In reality, the food has simply gone downhill even as portions have shrunk, according to customers. Another angry Disney World guest posted a photo of a bowl of penne, which included three shriveled meatballs.

“This was $12. They don’t believe in sauce apparently,” the customer wrote.

“I’ve had microwave meals that look better,” replied one fan.

“Looks like prison food,” another chimed in, while another called it “Disgusting slop.”

“Well, considering a 20 oz Coke costs $6, $12 for this dish sounds about right,” yet another user commented.

Another guest revealed how the company has skimped on its Mickey beignets, which cost $5 for three fried donuts in the shape of Mickey Mouse’s head.

“WTF Disney, you weren’t kidding about cutting portions,” one park goer wrote of the beignet, which appeared to be hollowed out.

Others posted photos of prix-fixe appetizers such as a salad composed of a few chopped-up lettuce leaves and some halved cherry tomatoes and radishes. A cheese and charcuterie board had just one cube and a single wedge of cheese next to a rolled-up slice of prosciutto with dried crackers and some unidentifiable spreads.

According to the Disney blog, a manager said the skimpy portions are “not because of Disney cutting costs,” but instead “due to supply chain issues.”

Either way, customers have been griping about higher prices at Disney World and Disneyland and cutbacks in service since CEO Bob Chapek took charge.

Disney, which has been hit hard by the pandemic, has been increasing prices in order to make up for the loss of business.

Late last year, Disney said it would increase ticket prices at Disneyland and Disney California Adventure in Anaheim, Calif., this year, noting that its popular single-day ticket price would jump 6.5% to $164 for admission to one park, while a two-day park hopper pass would cost $319, up nearly 9%.

According to Inside the Magic, even prices for ice cream have been jacked up. The Mickey’s premium ice cream sandwich and chocolate-coated premium bar rose from $5.69 to $5.99

At Disney World restaurant Ale & Compass, New England Seafood Pot Pie increased to $28 from $25, while Brick’ Lemon-Herb Half Chicken jumped to $24 from $22. The park’s watering hole, Trader Sam’s Tiki Terrace, has hiked cocktail prices by $2 to $3 a drink, with the restaurant’s signature Nautilus cocktail now priced at a whopping $35.

On the merchandise front, Walt Disney World News Today reported that several items at the Florida-based park are seeing increases ranging between $5 and $15. A Miss Piggy backpack, released a year ago for $80, now costs $95. Mickey ear headbands jumped $10 in price to $39.99, while a Monsters Inc. water bottle is up by $5 to $29.99.

In response, customers have sounded off on Reddit and other social media platforms, vowing to take their business elsewhere.

“If you’re the kind of person that budgets or saves for vacations, Disney Parks aren’t for you any longer,” wrote one angry customer on Reddit earlier this year, saying the company had ditched everyday people for the well-to-do. “That’s a Premium Physical Experience, and there’s plenty of national and international wealthy families to afford going indefinitely.”

Another lamented his recent Disney World experience, adding: “Up until now, I’ve not minded paying the prices as I’ve been able to justify it with what we were getting, or, at least in the memories we’ve made. Somehow, it never quite felt like full on exploitation. But I’ve finally hit my breaking point.”

A Native Meadow From Seed

Why Google Is Bringing App Permissions Back to the Play Store

Most patients want doctors who are tech-savvy and friendly: poll