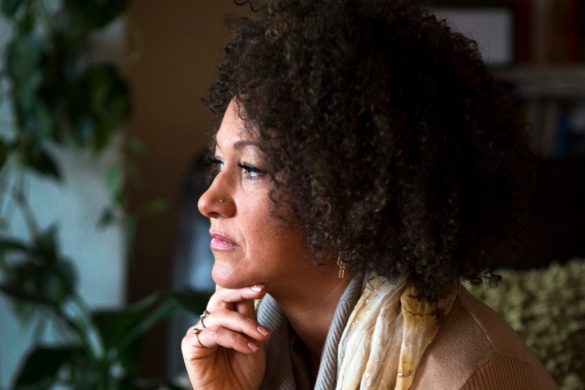 Notorious race faker Rachel Dolezal has yet another scandal on her hands.

The ex-NAACP chapter president — who was embroiled in scandal after being outed as falsely posing as a black woman  — joined the subscription site OnlyFans last year, sharing frisky photos for fans who forked out a fee.

But on Tuesday, several nude photos from her page leaked on social media, sending the 44-year-old hurtling into the headlines once again.

According to the rep, Dolezal “got her hands on the latest batch of lingerie [from the label] and wanted to show it off for her subscribers.”

Indeed, one of the four leaked pictures shows her clad in one of the brand’s bodysuits with her booty on display.

The snap shows the Montana-born woman sporting a previously-unseen tattoo of the word “JUSTICE” across her right butt cheek.

Meanwhile, another NSFW snap showed the “transracial” figure stripping off the Fenty bodysuit with her bare breasts exposed to the camera.

Dolezal — who still self-identifies as black — was widely trolled on Twitter following the nude photo leak.

“To have leaked Rachel Dolezal’s OnlyFans that means you would have had to pay for it so you’re going to hell twice. For leaking and paying,” one wrote.

“If you post Rachel Dolezal’s OnlyFans on my timeline, you’re getting blocked,” another bluntly declared.

A bio for Dolezal’s OnlyFans currently states: “Subscribers get to see how my sensual side pairs with my creative spirit through intimate images inspired by color, light, and lingerie on weekends.”

The Post reported last year that the race faker had joined the subscription site after claiming that she was unable to get a job in the wake of her race-based scandal. Fans can access her content for $9.99 a month.

At the time, Dolezal claimed she would be sharing “foot pics” as well as fitness tips.

The brunette vowed to upload at least three times a week, claiming there would be new content on Mondays, Wednesdays and Fridays.

“Monday Motivation = Gym/Fitness/Squats N Other Stuff, Wednesday WorkDay = Hair-chair Conversations with my clients + HairTutorial and Friday Unwind: I bring the Art, you bring the wine/drinks,” she wrote. “Watch me create & discuss my art.”

This is not the first time Dolezal has attempted to cash in on her notoriety: She has previously hawked homemade lollipops, Melanin Spectrum dolls and a $1,000 sculpture of an electric chair.

Don’t Use This Viral TikTok Hack to Fix Window Condensation
29 mins ago
NATO’s secretary general warns that a ‘full blown war’ with...
32 mins ago
Can You Use Crypto to Buy Gifts?
35 mins ago