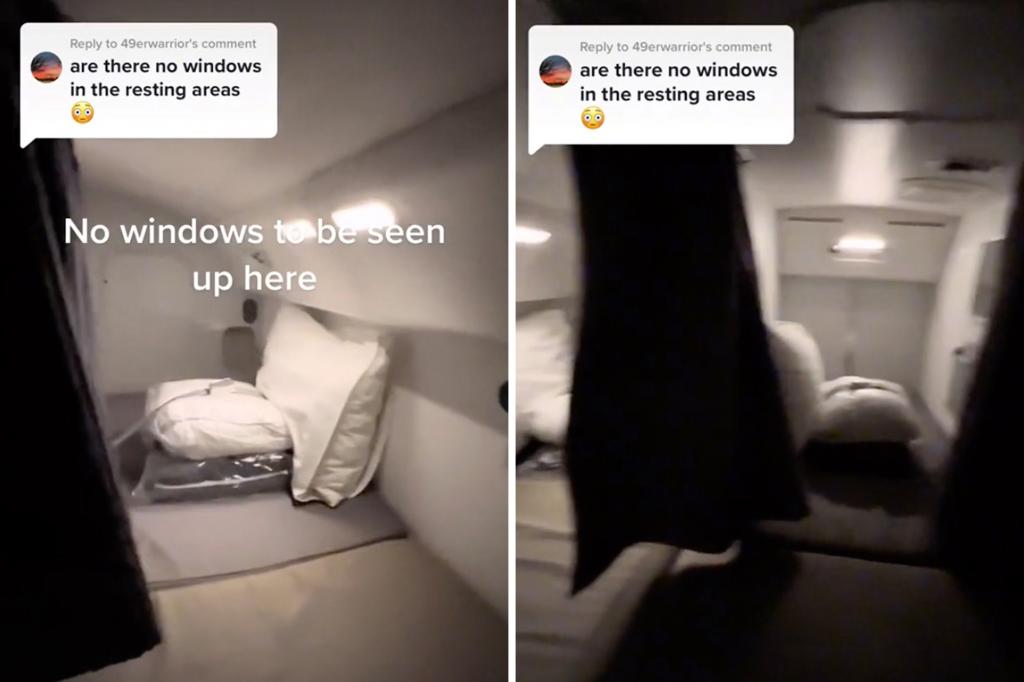 An airline employee has shared rare footage of the “dark” hidden spaces that are off limits to passengers.

In his TikTok, the staffer revealed where cabin crew go to rest or take a nap during long flights describing it as “dark little pods”.

“No windows to be seen up here,” he said while showing footage of the small, confined space.

“Just the flight attendants and their dark little pods.”

One staffer commented that his favourite part of a long haul flight was “getting to crawl in my bunk and knock out for two-plus hours”.

“It’s surprisingly cozy up there,” he wrote, while another staffer agreed that it is “really comfy”.

It is not known which airline the man works for, however, most Boeing 777 and 787 planes have a secret stairway that leads to a tiny set of windowless bedrooms for the cabin crew – including hidden bedrooms for pilots – that few people know exist, according to Insider.

Passengers can’t access them under any circumstance but most won’t know they exist because they’re hidden well from view.

On newer aircraft, such as the Boeing 787 or the Airbus A350, they are located above the main cabin, in the upper fuselage. On older aircrafts, they can be located in the cargo hold or simply in the main cabin.

She explained that on long-haul flights, the crew gets split in half, so that one half works while the other half rests.

She added that many flight attendants learn to sleep on command, but that most “don’t even sleep, they just sit on social media and hang out on their phone.”

According to CNN Travel, airlines have a say in the configuration of the crew rest areas when they purchase a plane, but the main parameters are set by regulators such as the Federal Aviation Administration.

It mandates, for example, that the crew rest areas should be “in a location where intrusive noise, odors and vibration have minimum effect on sleep,” and that they must be temperature-controlled and allow the crew to adjust lighting, CNN Travel states.

A flight attendant who works for United Airlines told the publication the sleeping bays are fitted with a padded mattress, air vent to keep air circulating and temperature controls.

“We’re provided with linens, usually similar to the ones used in business class on our international flights. I like them – but I’m also only about 5 foot 8 inches (176cm), so if you put a 6 foot 4 inch (195cm) person in there, they might be a little tight,” Susannah Carr told CNN Travel.

The rest areas are designed in such a way they do not attract much attention, in fact many would think it’s a closet, according to Susannah.

“I won’t go too far into how we access it – it’s secure, I will say that. Occasionally we have people that think it’s a bathroom door and they try to open it, but we just show them the way to the actual rest room instead,” she said.

In a YouTube clip from 2019, a crew member of an Airbus A350 gave viewers an “exclusive” glimpse into a “secret” rest area.

Footage showed a set of stairs at the rear of the aircraft leading up to a space fitted with multiple beds.

“It’s so dark in here,” he said while counting the number of beds – which were six.

“Curtain to keep it private,” he continued.

The clip ended with him going back down the narrow set of stairs.

Meanwhile, Air NZ has upped its game for passengers looking for a good sleep on long haul flights.

In June, it announced its Dreamliners, due to arrive in 2024, will offer the world’s first sleep pods in the sky for economy travellers.

Chief Customer and Sales Officer Leanne Geraghty told news.com.au it comes after feedback from customers over the past five years basically highlighting the importance for a good night’s sleep, more comfort and privacy.

“Skynest was an idea born out of looking at how we could offer a lie-flat option for Economy and Premium Economy travellers, and it’s going to be a real game-changer, adding more flexibility to the economy travel experience,” she said.

It allows passengers to stretch out in one of six pods for part of your journey and catch some shut eye, and to top it off, each pod will include a full-size pillow, sheets and blanket.