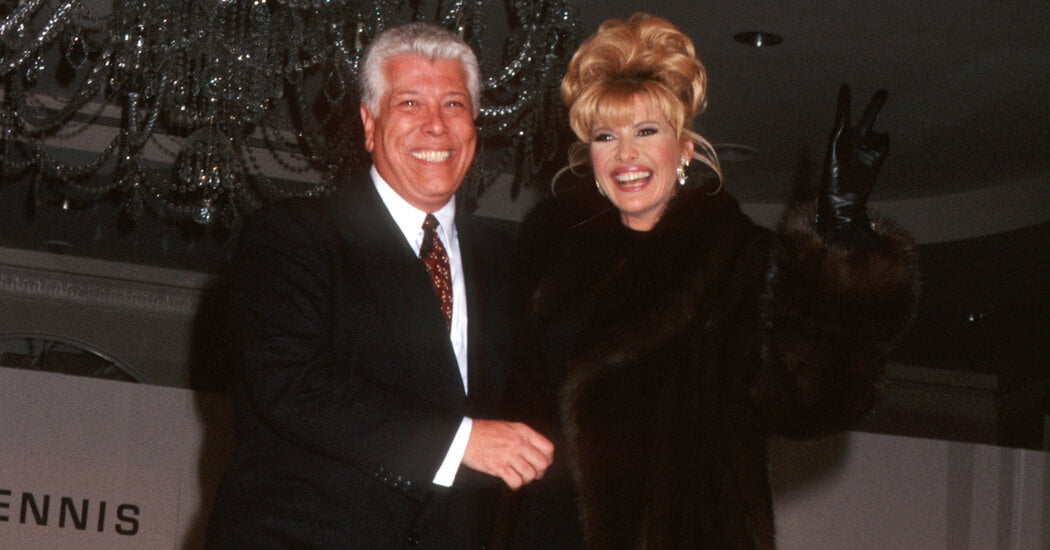 But it was, for the decade in which she and Mr. Trump first made their public mark, the epitome of a certain go-go 1980s New York style. One caught by Tom Wolfe’s “The Bonfire of the Vanities” and defined by chinchilla stoles, leopard-print shirtdresses, and Upper East Side ready-fitted trousers in soft colors. One in which your limo could never stretch too long, your hair and shoulder pads could never be too big, or your furs too fabulous.

And for nearly 40 years, even as styles changed drastically, Ms. Trump and Mr. Basso remained as two of the most consistent proponents of that paradigm.

Mr. Basso, 68, said he first met Ms. Trump in September 1983, when she came to his debut show at the Regency hotel on the Upper East Side of Manhattan.

She sat in the front row of his show that day near Joan Collins, another diva of the decade, then came backstage. “She said with that fantastic accent: ‘Dahling, I really don’t know you. But we’re going to be friends,’” Mr. Basso recalled. “I thought: ‘Oh, my God. Like, how could this be?’”

Trump Tower had recently opened near Bergdorf Goodman. Not everyone was enamored of the couple inhabiting the triplex at the top, but it was hard to argue that they did not perfectly capture the “greed is good” ethos of the era.

The day after Mr. Basso’s debut show, Ms. Trump materialized in his Seventh Avenue showroom and marveled at the size. “It’s smaller than my dressing room closet” was how she put it, Mr. Basso recalled.

But by the time she left, he had an order for seven magnificent fur pieces.

“One was a pale silver silk shantung maxi-coat lined in deep, deep sheared magenta fur,” Mr. Basso said. “She bought a chinchilla coat, a sable jacket, a big cashmere evening wrap. Remember the year! If you said you bought that now, it would be, like, ‘Have you lost your mind?’ But it was the height of all that glamour. Everybody was on that bandwagon.”

The relationship between Ms. Trump and Mr. Basso was by no means exclusive. Most of her suits and evening gowns came from Arnold Scaasi, Oscar de la Renta, Bill Blass, Lacroix, Halston and Versace.

The Czech-American businesswoman, whose high-profile marriage to former President Donald Trump in the 1980s helped make him a household name, died at 73.

But because Ms. Trump was “living in her own movie,” as Mr. Basso put it, and because she saw the most important scene as being the one in which she steps out of the car to make a grand entrance, outerwear became the mainstay — usually fur — and he was the guy to get it from.

At first, Ms. Trump bought off the rack from Mr. Basso. Then, things got collaborative.

“We couldn’t have made the shoulders bigger or fuller,” Mr. Basso said. “She always wanted to show her waist. She would call and say: ‘I love that. Can I have it in purple?’ ‘I love that. Can I have that in green?’ One year, around Christmastime, she called and said: ‘I’m in Aspen. I want a red sheared mink ski suit.’ Not being a great skier, I said, ‘But when you fall, it’s going to get wet.’”

Mr. Basso paused for effect, then added: “She said, ‘Dahling. I don’t fall.’”

So off Mr. Basso went, and soon enough, Ms. Trump was sailing down the slopes in it, as self-confident and unapologetically opulent as always.

Did she usually pay for her clothes?

“Always,” he said, though he added that she wasn’t shy about invoking the “friends and family” discount.

Which was fine with him. “This was a symbiotic relationship in which no person got more than the other,” he said.

The business Ms. Trump generated for him as both a muse and a supporter — in addition to her friendship, she hosted Basso fashion shows at her husband’s Taj Mahal hotel in Atlantic City — was “huge,” Mr. Basso said.

Tastes changed some in the early 1990s. Minimalism and PETA were not friends of furriers.

But Ms. Trump had grown up in Czechoslovakia, shortly after it became a communist dictatorship. Once she got to the United States and became wildly rich, she had little interest in making herself over in existential Helmut Lang and deconstructed Martin Margiela.

“She came to America from a communist country,” Mr. Basso said. “She was going to say her piece.”

This included when Mr. Trump left her for a younger woman in 1990: Marla Maples.

Soon enough, the tabloids her husband had used to build buzz for him and his properties became weapons Ms. Trump bludgeoned him with. She made the 1990 Met Gala her liberation celebration, complete with an actual makeover.

The hot-rollered-to-the-heavens hairstyle was gone. In its place was a Brigitte Bardot-inspired bouffant. The dress was a form-fitting black off-the-shoulder gown. Her date that evening was Boaz Mazur, the movie-star-handsome Oscar de la Renta sales director.

“She was really able to dust herself off and keep going,” Mr. Basso said, going on to recall the line she later delivered while making a cameo appearance in “The First Wives Club”: “Don’t get mad, get everything!”

In 1992, Ms. Trump was granted sole custody of her children with Mr. Trump — Ivanka, Eric and Donald Jr. — and signed the deed for a $2.5 million townhouse on East 64th Street.

One morning, Mr. Basso picked up The New York Post to find a story that said the townhouse had been robbed.

He said that after his initial horror upon learning of the robbery, he was shocked to read that what was missing was an astronomically expensive coat from his label. “It was hanging in my office,” he said. Between her move out of Trump Tower and the renovations of her new home, he said, “one of her assistants sent it over for safekeeping.”

After that, Ms. Trump walked in fashion shows for such friends as Thierry Mugler, and even closed Mr. Basso’s 1995 collection at the Pierre. Joanna Lumley mimicked Ms. Trump’s look while playing a killer cougar on the British sitcom “Absolutely Fabulous.”

The show was shown in the United States by Comedy Central and became a camp classic that cemented Ms. Trump’s haughty-queen image — and ability to laugh at her own legend.

Of Ms. Lumley, Ms. Trump said, “She was good, but I could have done it better,” Mr. Basso recalled.

From there, Ms. Trump got to work on House of Ivana, a beauty-products and clothing company that was run briefly by Riccardo Mazzucchelli, a suave Italian executive who two years later became Ms. Trump’s next husband.

Like the one who came before him, Mr. Mazzucchelli had a personality that was combustible and a father from whom he inherited much.

(According to the The Daily News, Mr. Mazzucchelli was a founder, along with his father, who worked in mining, of an “architectural planning and engineering firm that devised infrastructures for cities in Nigeria, Uganda and other African and Middle East countries.”)

Naturally, Mr. Basso was on hand when Ms. Trump married Mr. Mazzucchelli in 1995 at Le Cirque in New York. And naturally, he was there for her during the tabloid divorce that followed less than two years later.

She began dating a dashing Italian actor named Rossano Rubicondi, who was 23 years her junior, and she got a two-hour special on Oxygen called “Ivana Young Man.”

Friends cautioned that the age difference could become an issue.

But, Mr. Basso said, Ms. Trump once again had the perfect one-liner: “I’d rather be the nanny than the nurse.”

Ms. Trump’s close friend Nikki Haskell was a bridesmaid. Ms. Haskell’s date was Mr. Basso, and the chocolate wedding cake was 12 feet tall and flown in from Germany, according to People magazine.

Mr. Basso said it was probably the oldest wedding party in history. And, “it was so much fun.”

But soon after that, it began to look as if all was not well with Ms. Trump.

In 2009, Ms. Trump divorced Mr. Rubicondi. That year, she was escorted off an airplane after a reported expletive-filled tirade delivered to children who were playing in the aisle of first class.

But Mr. Basso said that as she portrayed things with him, all was well. Ms. Trump, he said, wanted most of all to be known as a good mother. And her relationship with her ex-husband Mr. Trump had been friendly in recent years.

This was partly because of the pandemic, but also because of more enduring changes to the social landscape. “Le Cirque, Mortimer’s, Gino’s, the Four Seasons,” he said. “They no longer even exist.”

Still, Ms. Trump never dropped out of touch with Mr. Basso and his husband, Michael Basso. “I spoke to her two weeks ago, my husband was texting with her last week, and we saw her maybe a month ago for dinner at Cipriani,” he said.

As he remembered it, she showed up on time and was in fine form. “This was a sudden surprise,” he said of her death. “I’m a little down. I’m a lot down.”