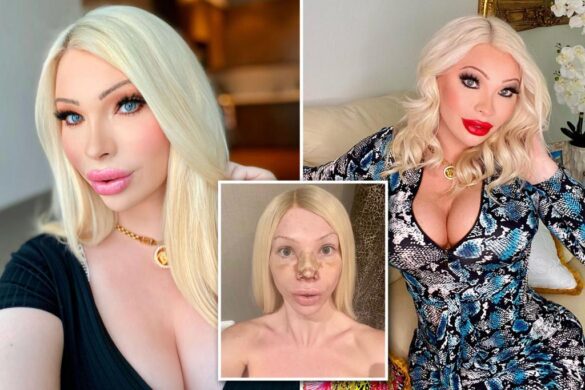 A self-confessed Barbie Girl has revealed how she has racked up an eye-watering $50K on plastic surgery in just six years in a bit to look like a Golden Age beauty.

Reality TV star and musician, Serena Smith, 23, from California, has been having surgical procedures since she was just a teenager to alter her look and emulate the appearance of Golden-age Hollywood beauties such Marilyn Monroe, Jayne Mansfield and Anna Nicole Smith.

From here, the gateway to the world of plastic surgery had been opened, and Serena has since had a rhinoplasty costing $11K to acquire a glamorous “Hollywood nose”, and regularly undergoes less invasive procedures such as Botox and fillers in her lips.

Despite this heady mix of procedures, she desired something more.

Recently, Serena took the plunge and decided to have a Brazilian Butt Lift (BBL) and chose a reputable surgeon in North America to carry out the procedure, leaving her happy with the results.

“I am very happy with the results, I think they turned out great, the surgery completely changed my body proportions and gave me the curvier look I was after,” she said, adding safety is always a priority for her.

“You have to be extremely cautious about who you chose to allow to operate on you because you are putting your life in their hands, especially with surgeries like the BBL.

“It’s the most dangerous plastic surgery with the highest death rate.”

Resulting in death in one in 3,000 patients, according to the 2017 report from The American

Society for Aesthetic Plastic Surgery, the BBL isn’t a procedure for those who are faint of heart.

A BBL involves taking fat from areas where it is unwanted like the stomach, back and flanks via liposuction, and transplanting it into the buttocks and hips, resulting in a curvier hourglass frame.

However, due to the nature of the procedure, fat embolisms that see fat enter the bloodstream and cause a blockage, are a real risk and are the most common complication.

Though Serena’s procedure went to plan, recovery hasn’t been an easy road.

“The recovery for this procedure is very intense, definitely the hardest so far. You have to wear a compression garment 23 hours a day for two months and it can get pretty uncomfortable.

“The most painful part of the recovery was the initial first two weeks. I was sore all over covered in bruises and very swollen.

“I had drains in me collecting all the blood and fluids coming out of my body for almost two weeks which wasn’t a pretty sight, but in the end, it was all worth it.”

She said it was hard to get in a comfortable position because your whole body is in pain and you can’t put pressure on your buttocks for months. The hardest trying to find an easy position to sleep in.

But, it was worth it when her confidence skyrocketed.

“Anything that helps me lead a happier, more confident life is worth it to me, and like they say, pain is beauty,” she said.

Serena takes this motto literally and is excitedly anticipating her next procedure – a second breast augmentation to increase the size of her chest, which surely will not be her last.

“I needed to do the BBL first before my extra-large implants so I would have good proportions and my body would be symmetrical,” she said.

“I didn’t want to look like an upside-down triangle, in my opinion, it’s all about balance to achieve a really attractive look.

“I will never stop having surgery. Once I complete everything I would like to do and I am satisfied I will be happy and content, but once you start to age it’s all about maintenance and keeping that youthful look.”

She said when she gets to a certain age it will be about face and eye lifts, but at the end of the day, all the procedures is about feeling empowered.

“Having surgery makes me feel empowered, I love that we are able to create ourselves to be whoever we want,” she said.

“Having the vision in my head of how I see myself come to life is extremely satisfying.”

“I am happy with the results from all my surgeries, but do I still see upgrades and improvements that can be made? Absolutely.

“I want to have more surgeries in the future because I like to continually improve myself.

“It’s an investment into yourself.

“You are your best and most valuable asset and having that inner confidence from feeling beautiful will shine through and have an impact on your entire life.

“It’s not all about looks to me, it’s about feeling comfortable with myself and doing what I need to do to feel that way.”

Being truly comfortable within herself means that Serena isn’t fazed by any criticism she receives on social media.

She said she gets a mixed response online to her appearance, and she appreciates anyone who supports her.

For the people who judge without actually knowing her, the 23-year-old said she feels bad for them for wanting to bring others down.

“I am not hurting anyone with my choices. I like to spread positivity on my Instagram page and have it be a safe place for my fans and followers to interact with me,” she said.

“In life, you can never please everyone because not everyone chooses to be happy and positive.

“All you can do is control how you react to things and how you perceive them.

“To be a public figure and someone who puts their life out there for the world to see, you need to have a thick skin and be able to block out the negativity.

“In a year or two, I would love to do another round once everything settles. I think I have a great starting point to really build off.” How to Tailgate in Style This Football Season

Florida caterer sued for allegedly serving marijuana-laced food at wedding
22 mins ago
Hurricane Season Ends, Marked by Quiet August and Deadly September
1 hour ago
10 Ingenious Ways to Use Up Your Leftover Turkey
1 hour ago