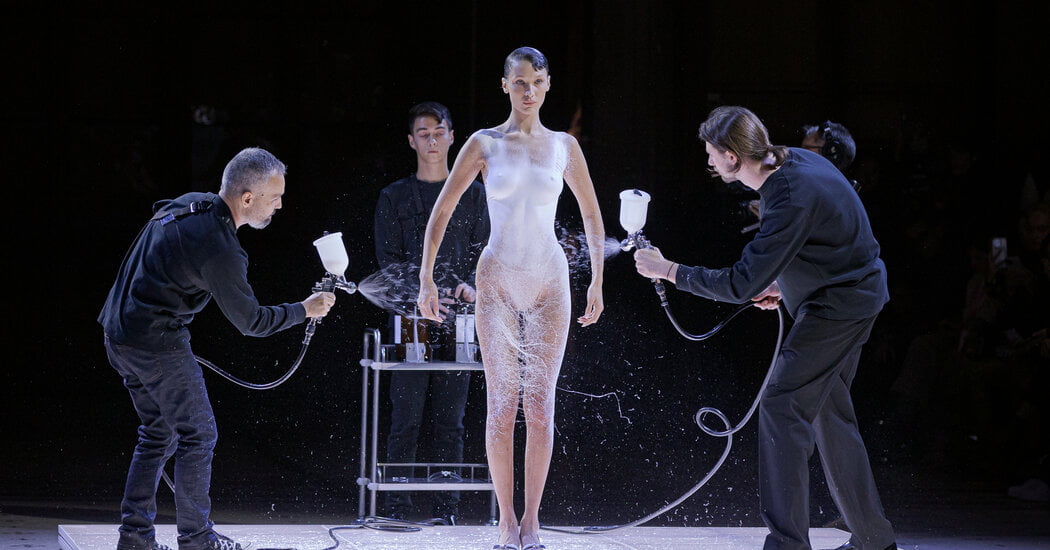 PARIS — Of course it was going to go viral. The performance at the end of Coperni’s fashion show on Friday night offered many of the internet’s favorite things: a nearly-naked supermodel, 1990s fashion nostalgia and a high-ranking member of the Kardashian-Jenner family in the vicinity to bear witness.

But the stunt was also, for many people in the crowd, genuinely impressive. For about nine minutes, they watched a white, off-shoulder dress being sprayed onto Bella Hadid’s body. The substance — a patented spray-on fabric developed by a London-based company called Fabrican — looked like spider webs at first, until the fibrous layers thickened, instantly drying into a soft, pebbled fabric and effectively mummifying the model.

In pictures the dress looked like it could be a kind of silk or cotton, but to the touch, it felt soft but elastic, bumpy like a sponge.

Technology motivated the performance: The Parisian brand Coperni is named after the Renaissance mathematician and astronomer Nicolaus Copernicus. Founded in 2013, the brand is interested in fusing science, craft and fashion, and made headlines earlier this year when its handblown glass bag, on sale for 2,700 euros, was carried by Doja Cat on the Grammy Awards red carpet. “I’m a little bit of a geek,” Coperni’s creative director Sébastien Meyer said.

While Ms. Hadid’s dress isn’t strictly sellable (or rewearable, for anyone without her exact body measurements), Coperni does plan to display it in its showroom. The dress could be taken off like any other tight, slightly stretchy one: a process of peeling off and shimmying out. It can be hung and washed, or put back into the bottle of its original solution to regenerate, according to Coperni’s chief executive, Arnaud Vaillant.

But really, the point of the dress was the drama of its creation — in line with fashion’s rich tradition of live-on-the-runway showmanship. For his spring 1999 show, the designer Lee Alexander McQueen had two robots spray-paint a dress worn by Shalom Harlow.

The spray-on dress was not in homage to the McQueen moment, Mr. Vaillant said: “It’s totally different.” Instead of robots, for example, there was the inventor Manel Torres and a member of his Fabrican team spraying Ms. Hadid as she stood on a small square illuminated stage in the middle of the runway. Mr. Torres, who founded Fabrican in 2003, has long been exploring ways to use spray-on fabric. (Fashion is one; medical bandages and casts are others.)

Toward the end of Ms. Hadid’s spraying, Charlotte Raymond, Coperni’s head of design, walked onstage. She used her hands to help shape the straps and neckline of Ms. Hadid’s newly materialized dress as it was drying. Then she cut the hem and one long leg slit into the fabric.

Mr. Vaillant said he felt “it would have been a bit pretentious for Sébastien to do it. We wanted something more humble” — something to reflect the team effort behind the stunt. Coperni had only about five opportunities to practice the performance, including once the night before the show, with a model standing in for Ms. Hadid. The stand-in couldn’t control her shivering on the already chilly runway, as the even-colder spray-on material hit her skin, and as she breathed in its thick, glue-like odor.

Ms. Hadid’s Paris Fashion Week schedule didn’t allow for a rehearsal; the runway show was her first time being sprayed. “I was so nervous,” she later said backstage, but it didn’t show. She was alternately steely and delicate, occasionally raising her arms above her head with an elegant flair, or smiling at Ms. Raymond: “I kind of just became the character, whoever she is.”

Wasn’t it cold up there? “Honey, cold is an understatement,” Ms. Hadid said. “I really blacked out.”

Yet even less than a minute after leaving the runway, she said she already felt like the performance had been a “pinnacle moment” in her career. She was standing in the center of a crush of people — crew, friends, fellow models, Kylie Jenner in a pair of sunglasses that wouldn’t stay on her head — who had gathered to hug and kiss her and touch the alien dress on her body, telling her “congrats, diva,” that she was “un”-expletive- “believable,” that she was “insane.”

“I think that was the best moment of my life,” she said.

How to recognize ‘Greenwashing’ When You See It
21 mins ago
Russia and Iran are strengthening their defense partnership, the Biden...
34 mins ago
GORGEOUS DOLL TRANSFORMATION || Miniature Doll Hacks
53 mins ago