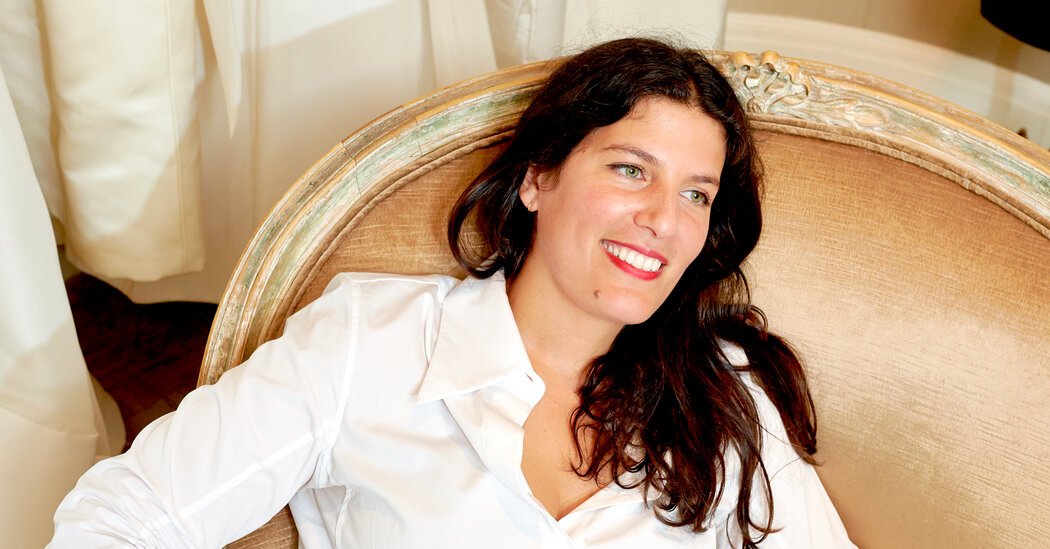 But as the fashion designer tells it, after debuting her namesake ready-to-wear label in 2013, clients gravitated to its white pieces for wedding attire. Soon fans began asking about a bridal collection; by Ms. Assoulin’s estimate, her company received hundreds of such inquiries over the years.

By 2020, she had recognized that those requests could no longer be ignored. Then, just as her sister was supposed to get married, the pandemic arrived. “They had to cancel their wedding and got married alone on a beach,” Ms. Assoulin (pronounced Ah-SOO-Leen) said. “We made her dress: a burgundy and turquoise dress that tied at the waist from our fall/winter 2018 collection, which we remade in cream and beige with a beautiful hooded veil.” The process, she added, showed “our team that we could make a collection specifically delegated to bridal.”

The materials she chose, though also not atypical for formal wear, were more diverse. “For this, I was drawn to more finicky and precious fabrics like gazar, organza, moray, velvet and silk,” Ms. Assoulin said.

Less typical are certain pieces that she said “you don’t see in bridal,” including a bucket hat and cargo pants. There is also a dress inspired by a puffy comforter, as well as garments made three-dimensional by embellishments including satin daisies and pearls.

“Historically brides only wore one dress. Now they might want one outfit for each moment that can happen over a weekend, which is how we saw this collection,” Ms. Assoulin said. “Weddings have lots of moments.”

Prices start at $795, for the bucket hat, but the majority of the collection retails for between $1,795 and $12,995, according to Lauren Cooper, a spokeswoman for the label.

‘A Sense of Sisterhood’

On a Friday in May, Ms. Assoulin hurriedly entered the bridal salon at Bergdorf Goodman, in Manhattan, where her new collection was displayed on two racks. A trunk show was about to begin, her first since the pandemic’s arrival, and she was feeling “out of practice.”

“I haven’t been in front of the customer or buyer in two years,” she said. “It’s a muscle I haven’t used in a long time.”

Dressed in a white-button down shirt and cream pants, Ms. Assoulin practically blended in with the garments she was presenting as she explained her design process and the inspiration behind it.

“I’m inspired by beautiful, expressive and creative elements: art, sculpture and architecture,” she said, as well as the hundreds of vases and bowls that she has collected for most of her life. “Many vases look like dresses already.”

“Being able to take those elements,” she added, and “find ways to fit that puzzle into a garment and make it functional, flattering, comfortable and relaxed — that’s design.”

Ms. Assoulin was midsentence, her hand touching one of her gowns, when Elizabeth Limberakis, 33, walked into the salon with her mother.

After introducing herself, Ms. Limberakis sought some styling advice from Ms. Assoulin for her wedding, which is set to take place next May in Philadelphia, where Ms. Limberakis lives. She then made her way into a dressing room with the Bouquet, a tulip-shaped tea-length dress with a pointed bodice and puffy shoulder straps encrusted in silk gazar, which costs $3,995. It fit her to perfection.

“This feels so glamorous,” said Ms. Limberakis. “I’ve tried on a few dresses before, and nothing looked as good as this.” She ultimately placed an order for the gown.

Describing herself as “bigger on the bottom and smaller on the top,” Ms. Limberakis said she was drawn to Ms. Assoulin’s clothes because “Rosie designs for everyone, not just the perfect sample size.” (According to Ms. Cooper, the Rosie Assoulin spokeswoman, the bridal line is semi-custom and made to order, while the ready-to-wear line is generally available in sizes 0 to 16.)

“I feel a sense of sisterhood and camaraderie because I see myself in her designs,” Ms. Limberakis added.

That customers can develop such personal connections to Ms. Assoulin’s line may be because her earliest garments were personal in nature. From Gravesend, Brooklyn, Ms. Assoulin at 12-years-old began cutting up her mother’s old clothes and reconfiguring the scraps into wearable pieces using her maternal grandmother’s sewing machine.

She later enrolled at the Fashion Institute of Technology, but left after four months. “I was not a good student and not thriving in that school environment,” Ms. Assoulin said. That did not stop her from getting a design internship at the luxury brand Oscar de la Renta, where she worked for a year before moving onto gigs at other labels including Adam Lippes and Lanvin.

In 2004, she married Max Assoulin, the son of the accessories designer Roxanne Assoulin, whom Ms. Assoulin interned for as a teenager. Mr. Assoulin has been the chief executive at his wife’s namesake fashion company since its inception. The couple, who have four children, live between their homes in Manhattan and New Jersey; the Rosie Assoulin offices are in Manhattan.

Out of the Ordinary

“Today’s bride has a clear idea of what they want,” Ms. Assoulin said as the pace started to pick up at her trunk show. “They are looking for something unique and different. That’s us.”

Out of the ordinary is what Osa Omokaro, 38, a senior user experience researcher at Google, was hoping to see when she showed up at Bergdorf Goodman with a friend. For her wedding, which is set to take place in Marrakesh, Morocco in November, she had struggled with finding a dress that met her style, which she described as “nontraditional, a bit tomboyish but elevated and stylish.”

“Everything is so traditional, which to me means mermaid with a lot of bling,” said Dr. Omokaro, who lives in Lower Manhattan and holds a Ph.D. in computer science from the University of North Carolina at Charlotte. “I’m excited Rosie’s here so she can tell me what I should be wearing, and how she will style the dress.”

And that Ms. Assoulin did, piling into a dressing room with Dr. Omokaro and her friend and offering advice as Dr. Omokaro tried on three gowns.

“They make a statement,” Dr. Omokaro said of Ms. Assoulin’s designs, calling them “sophisticated and classic,” and “structural and high fashion.” But not too high fashion. “You can mix and match her pieces and wear them afterward to something else,” she added.

Soon Ms. Assoulin was back in a dressing room with yet another would-be bride: Diana Ming, 30, a vice president of strategy at a major Wall Street bank.

It was Ms. Ming’s first time gown shopping ahead of her wedding, which is scheduled for next June in Brooklyn. A self-described “big fan of Rosie’s,” the dress she was trying on, the Hodges Podges — a $5,995 A-line style with a sweetheart neckline, spaghetti straps and silk flower embellishments — checked all her boxes.

“My wedding is garden themed so I wanted something with flowers,” Ms. Ming, who lives in Brooklyn, said. “I love that it flows, that it’s floral and is feminine and yet is still creative and fun.”

Ms. Assoulin, who by now showed no signs of being out of practice at engaging with customers, chimed in.

“This part here,” she said while cinching some fabric at the back of the dress, “is more transparent, which we do for samples. For you, we could add something opaque, or we would double up on something sheer to keep that ethereal look.”

By midafternoon, the two racks once full of Ms. Assoulin’s bridal wear were nearly empty. Most of the garments were inside the salon’s four dressing rooms, all of which were occupied. But not by Dr. Omokaro, who by then had left feeling far more optimistic about her dress search.

“Rosie’s pieces are classic, beautiful, elegant and fashion forward,” she said. “It feels like this designer gets me.”