The Largest Ever Exhibition on African Fashion Just Opened in London 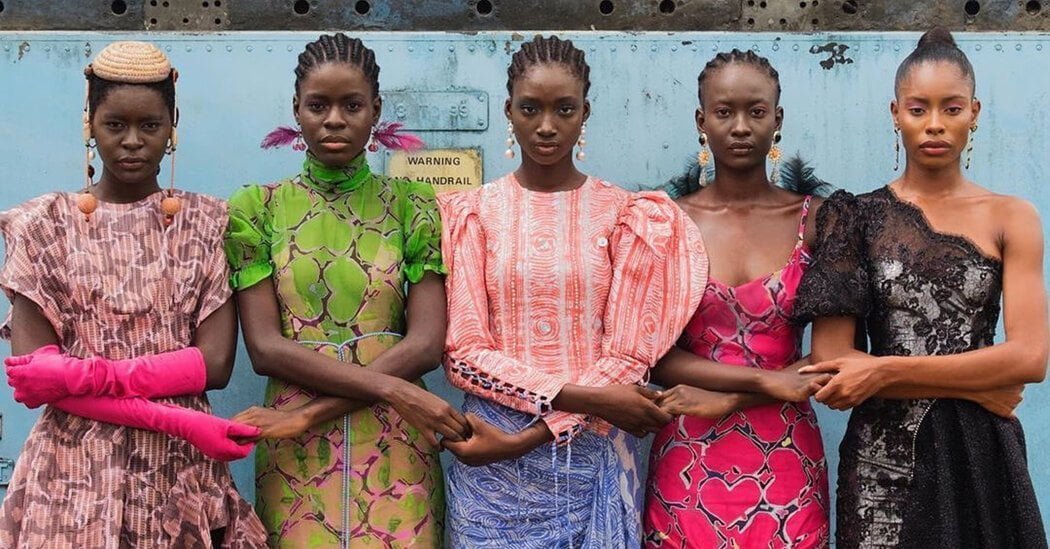 LONDON — The influence of Africa and its fashion scene has redefined the geography of the fashion industry in recent years, breaking barriers with its vitality and its reimagining of what creativity can be.

A continent whose fashion has often been imitated, yet gone largely underrecognized by the West, is having a long overdue moment in the spotlight. Magazine editors and stylists like Edward Enninful and Ibrahim Kamara, have helped spur its celebration, along with critically acclaimed explorations of the African diaspora by designers like Grace Wales Bonner and the late Virgil Abloh. The emergence of a new generation of homegrown designers like Thebe Magugu, Mowalola Ogunlesi and Kenneth Ize has also been key.

Last week, at a time when many museums with colonial legacies are re-evaluating representation in their Eurocentric collections, the Victoria and Albert Museum in London opened a vibrant exhibition showcasing African fashion and textiles, the first in its 170 year history.

The exhibition, “Africa Fashion,” does not try to survey the fashion of all 54 countries that make up the world’s second largest continent, home to 1.3 billion people. Instead, it reflects on what unites an eclectic group of contemporary African pioneers for whom fashion has proved both a self-defining art form and a prism through which to explore ideas about the continent’s myriad cultures and complex history.

“There is not one singular African aesthetic, nor is African fashion a monoculture that can be defined,” said Christine Checinska, the museum’s first curator of African and African diaspora fashion. Instead, the show focuses on the ethos of Pan-Africanism embraced by many of the continent’s designers and artists.

“This show is a quiet and elegant kind of activism because it is an unbounded celebration of fashion in Africa,” Ms. Checinska said. “It centers on abundance, not on lack.”

Spread across two floors, the exhibition begins with a historical overview of the African independence and liberation years, from the late 1950s to 1994, and the cultural renaissance that was spurred by social and political reordering across the continent. The show explores the potency of cloth and its role in shaping national identity — notably in strategic political acts, as when Kwame Nkrumah, the Ghanaian prime minister, eschewed a suit for kente cloth to announce his country’s independence from British rule in 1957.

The show also highlights the importance of photographers like Sanlé Sory of Burkina Faso, who captured the youthquake shift of the 1960s, and whose work is displayed alongside a section dedicated to family portraits and home movies that reflect the fashion trends of the day. Other work in the show includes clothes by 20th-century designers who bridged cultures to put contemporary African fashion on the map but whose names have remained largely unknown outside the continent.

One of them is Shade Thomas-Fahm, often described as Nigeria’s first modern designer. A former nurse in 1950s London, she created cosmopolitan reinterpretations of fabrics and shapes that were worn by the great and good of Lagos in the 1970s. On display is a raspberry red dress and hat in synthetic velvet with fluted Lurex sleeves. Chris Seydou, another designer in the show, made a name for himself in the 1980s by using African textiles like bògòlanfini, a handmade Malian cotton fabric traditionally dyed with fermented mud, for tailored Western trends like bell-bottoms, motorcycle jackets and miniskirts.

A mezzanine gallery hosts a collection of work by a new generation of African designers. The garments are shown on specially created mannequins with various Black skin tones, hair styles that include Bantu knots and box braids and a face inspired by Adhel Bol, a South Sudanese model.

All of the designers, who were selected by museum curators, external experts and a group of young people from the African diaspora, were involved in the display process, the museum said.

“Now more than ever, African designers are taking charge of their own narrative and telling people authentic stories, not the imagined utopias,” said Thebe Magugu, who is from South Africa and won the prestigious LVMH Prize in 2019. An elegant belted safari jacket ensemble from his 2021 Alchemy collection, which explored the changing face of African spirituality, features a print of the divination tools of a traditional healer, including coins, goat knuckles and a police whistle.

“I feel like there’s so many facets of what we’ve been through as a continent that people don’t actually understand,” Mr. Magugu said.

A desire to use fashion as a medium for enacting change is what unites many designers and photographers from across Africa, who are rethinking what a more equitable fashion industry could look like. Consider the questioning of binary identities by Amine Bendriouich, with his red linen djellaba crossed with a trench coat; the refashioning of gender norms by Nao Serati, who used pink Lurex for unisex flares, a jacket and bucket hat; and the elegant sculptural minimalism of pieces by brands like Moshions and Lukhanyo Mdingi that employ longstanding material traditions while subverting the stereotype that African fashion must always be loud and patterned.

At the heart of many of the brands is a timely focus on sustainability.

“African creatives have almost been left out of the fashion futures discussions, and I think it’s time the global north looked and learned from industry leaders and designers on the continent,” Ms. Checinska said. “They finish garments using local craftspeople and keep local traditions alive. It’s slow fashion — and sustainable through and through.”

As a result of the show, the Victoria and Albert Museum has acquired more than 70 pieces for its permanent collections. But the broader power of “Africa Fashion” may be in how it leaves visitors keen to learn more about the dazzling Pan-African scene, and invest further in its future.

“It is such a great milestone for us, because it cements our place in history,” said Aisha Ayensu, the founder of Christie Brown, a Ghanaian women’s wear label. “It puts us in front of the right people. It creates awareness for the brand and piques the curiosity of people around the world — not only to research African brands, but also to patronize them too.”

Wedding guest in gold dress accused of ‘stealing’ attention: ‘I would never’