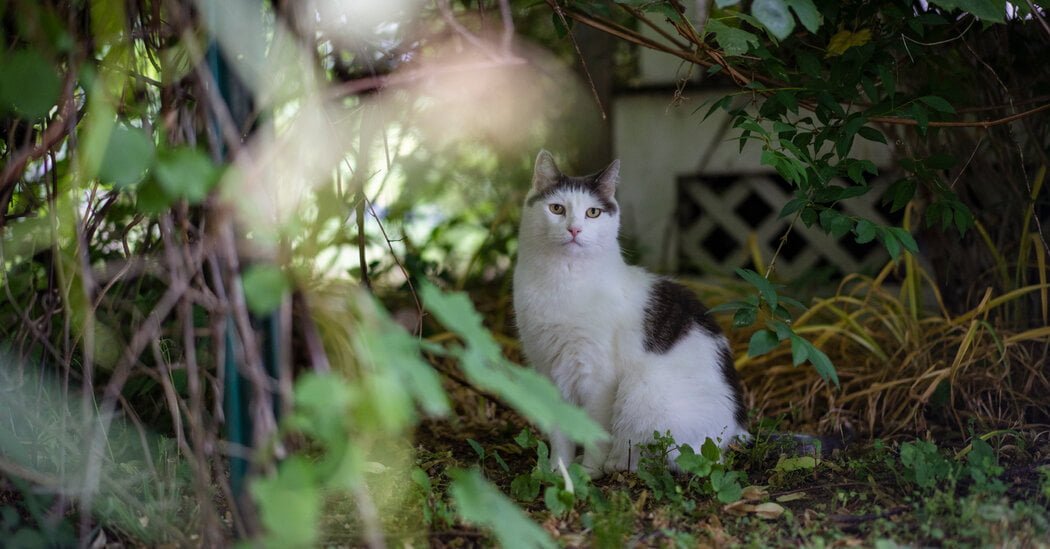 Zeke, a white and gray short-haired cat with a penchant for taking down rats, is known in his Boston neighborhood as a fearless prowler.

“‘Zeke is in the back and seems to be antagonizing a raccoon,’” the neighbor said, according to Ms. Brennan, a Unitarian Universalist minister.

The showdown ended when the neighbor scared off both creatures with a broom, but the story only cemented the legend of Zeke. It was also a reminder that cats are descendants of the Near Eastern wildcat, a fierce, solitary hunter.

You’ve seen them out there — well-fed cats, sometimes with collars on, stalking the streets like they own them or collapsing on a warm sidewalk to loll in the sun.

Cat lovers find them charming. Wildlife conservationists and bird lovers see furry killers and blame them for a decline in the bird population and the deaths of untold numbers of voles, chipmunks and other small animals.

How you feel about outdoor cats may also depend on where you are in the world. In the United States, about 81 percent of domestic cats are kept inside, according to a 2021 demographic study of pet cats. But elsewhere, it can be far more common to let them roam. In Denmark, only 17 percent of cats are strictly indoor pets, according to the same study. In Turkey, it is so common for feral cats to walk freely in and out of cafes, restaurants and markets that a documentary was made about the phenomenon. In Poland, they’ve recently been called an “invasive alien species.”

And in Britain, where the 2021 study said that 74 percent of cat owners let their felines roam outside, many cat charities advise pet owners on the best ways to keep cats safe outdoors. The idea might be shocking to their American counterparts, which often refuse to adopt cats to people who want to keep their pets outside.

“We’ve always done it that way,” said Nicky Trevorrow, a cat behaviorist at Cats Protection in Britain, which encourages owners to bring cats in at night and feed them high-quality diets to deter predatory behavior.

The Fascinating World of Birds

“As a behaviorist,” Ms. Trevorrow said, “I would have to say very much that I’m in the camp of giving cats space to breathe and be outside.”

But should cats have this much freedom?

‘We can only take so much animal out of them.’

During much of the 20th century, most cats stayed outside, said David Grimm, author of “Citizen Canine: Our Evolving Relationship With Cats and Dogs” and a deputy news editor at Science.

The invention of kitty litter in 1947 made indoor cats more acceptable.

“But even then, people considered cats the less domesticated animal,” Mr. Grimm said. “And no one wants to clean a litter box.”

In 1949, the Illinois General Assembly passed the “Cat Bill,” a measure aimed at protecting birds, which would have fined people who left their cats outdoors. Gov. Adlai Stevenson vetoed the bill.

“It is in the nature of cats to do a certain amount of unescorted roaming,” he said in a letter to legislators. “In my opinion, the State of Illinois and its local governing bodies already have enough to do without trying to control feline delinquency.”

It was not until around the 1980s and early ’90s that more Americans began bringing their cats indoors, as conservationists warned of declining bird populations and veterinarians cautioned that an outdoor cat was more prone to diseases, parasites and infections, and could be vulnerable to attacks from larger predators like coyotes and hawks, or speeding cars.

But many owners have also felt conflicted about keeping a curious, restless creature inside, said Mr. Grimm, who has trained his own cats to walk on leashes when they’re outside.

Keeping them inside “didn’t feel right,” he said. “Just like I wouldn’t keep my kids inside all day. We can only take so much animal out of them.”

Ms. Brennan, Zeke’s owner, tried to keep him indoors at first. But he nipped heels, yanked at Ms. Brennan’s hair, and pounced so much that her teenage daughter locked herself in her room.

Wildlife specialists often tell the story of Tibbles, a cat that traveled with her owner to New Zealand in 1894.

The pair settled on Stephens Island, where a type of small, flightless bird abounded.

But when Tibbles arrived, she single-handedly hunted the birds to extinction, conservationists have alleged.

Where cats have been introduced, they have decimated native creatures, according to a 2011 study by biologists.

“I feel pretty strongly that it is a pretty devastating invasive species,” said Jason Luscier, an associate professor of biology at LeMoyne College in Syracuse, N.Y. He helped develop an app, called “Cat Tracker,” to get a more accurate reading on the number of outdoor cats around the world.

Professor Luscier, who emphasized that he is fond of cats (“they’re super snuggly”), said it is colonies of feral cats, which multiply easily and can overwhelm an ecosystem, that are the bigger threat to birds and other wildlife, not outdoor domestic pets that come in at night and are fed regular meals.

Can cats roam outside ‘without carnage’?

Ms. Trevorrow, the behaviorist in Britain, said people often fail to look at the larger threats facing birds, such as loss of habitat and the commercial use of pesticides that kill insects, the natural prey of birds.

“I just feel like cats are used as a scapegoat,” Ms. Trevorrow said.

The Royal Society for the Protection of Birds in Britain said the decline in bird populations has been caused primarily by man-made problems such as climate change, pollution and agricultural management.

“Cats are unlikely to have a major impact on populations,” she said in an email.

Ms. Trevorrow has written guides for cat owners who want to keep their pets outside and maintain a garden that will attract birds and other pollinators.

“There is a way to have both without carnage,” Ms. Trevorrow said.

Still, the best way to keep your cat — and wildlife — safe is to put it on a leash, keep it in a fenced in-area, or build a “catio” that will allow it to play outside without being exposed to the elements, said Dr. José Arce, a veterinarian and president of the American Veterinary Medical Association.

Kelly Goshe said two of her family’s three cats, Catson and Puff, are determined prowlers. They roam around their deck and backyard in suburban Cleveland, under the watchful eye of her children, Sylvia, 9; Corinna, 7; and Wesley, 4.

The cats gave them little choice, she said. Catson “will do anything to get out,” Sylvia said.

Puff has figured out how to open the sliding door with her paws, she said.

But Luna, Puff’s sister, is terrified of going outside.

“We let her stand by the screen door,” Ms. Goshe said. “She’ll just look at it and run away.”

Drought Is Declared in Parts of a Hot, Dry Britain
August 12, 2022
Britney Spears FIRES BACK at Ex Kevin Federline's Surprising New Interview
August 12, 2022
How Elon Musk’s attempt to drag out the Twitter trial could backfire
August 12, 2022